Who Run the World? (Super)Girls! | The Mary Sue

Who Run the World? (Super)Girls! 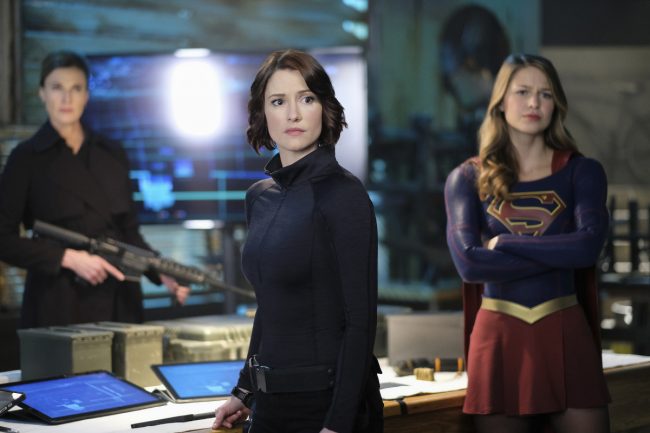 Supergirl had its ups and downs this season, but towards the end there, it wasn’t just great television, it was important television.

Like everyone else, I have spent the better part of the last two weeks obsessively streaming Hulu’s Handmaid’s Tale adaptation, a show that has been widely—and deservedly—praised as well-executed and politically all-too-relevant. It feels like important television, a cultural event. By contrast, the weekly schlock turned out by The CW isn’t likely to be held up as a model of social commentary. When the Berlanti shows delve into social comment, it’s usually ham-fisted at best and lacking any real social import at worst. Take, for instance, the unbelievably lame attempt to tackle gun violence and gun control in Arrow’s “Spectre of the Gun,” in which Oliver essentially concludes that “it’s complicated” lest the show alienate viewers on either side of the issue.

But in “Resist,” the penultimate episode of Supergirl‘s latest season, the show rose to new heights, effectively presenting itself as a foil for The Handmaid’s Tale. If Atwood’s dystopia is a world in which women have been reduced to walking wombs, Supergirl’s National City has become a place in which female characters are granted power, intelligence, and a voice. “Resist” was a genuinely female-driven episode. The major players were all female: Supergirl, Rhea, President Olivia Marsdin, Alex, Lillian Luthor, and—thank whatever female deity resurrected her—Cat Grant. The men were either relegated to the sidelines (J’onn J’onnz was unconscious, Mon-El spent the episode as “damsel” in distress), or else useful supporting characters (Win, Guardian, Cyborg Superman), who aided the women in executing their plans but were definitely not driving the boat. Since the departure of Cat Grant, the show has too often been about Kara navigating a male-dominated workplace, under the supervision of J’onn J’onnz at the DEO or James and Snapper at CatCo. In “Resist,” the women ran the show.

What was more noteworthy than the mere presence of so many female characters was the way in which, by placing the women in the leading roles, the show also began to reject a traditionally patriarchal worldview. In her wonderfully written and archly delivered opening salvo, Cat chastised Rhea for not understanding that she is a powerful woman, that the three of them didn’t need to engage in “measuring” and behave like “testosterone-filled,” power-hungry men; rather, as women, they could come to an accord and achieve peace. This speech set the stage for the entire ethos of the episode. As Cat wistfully told Kara, “It’s not about what you do. It’s about who you love.” The entire episode stressed the extent to which we are—to borrow a phrase—stronger together. Characters like Rhea and Lillian Luthor, who believed in the superiority of one group over another, who emphasized division rather than unity, were the villains. Those whose logic ran along the lines of the ruling regime in The Handmaid’s Tale were the enemy.

By contrast, Cat’s speech (with that admittedly heavy-handed but delicious line, “They promise to make our world great again, and yet they know nothing about the people who make this world great.”) stressed the importance of banding together. She explicitly invoked aliens and humans, asking them to work together to expel the Daxamite invasion. The resistance, led by women (the President, Alex, Cat), had a place for everyone: aliens and humans, men and women, people of different races and sexualities. If The Handmaid’s Tale presents a dystopian look at extreme social stratification, Supergirl, in this episode, offered us a utopian vision of how we might all live in harmony.

Sisterhood and support were at the core of the episode; the humans vowed to keep the President’s secret because “she is a pacifist,” Alex refused to fire on Kara as she worked to save her sister, Maggie and Alex continued to carry on one of the most pleasantly normalized gay relationships I’ve seen on television, Cat mentored Kara, and even Lillian seemed attached to her daughter. It seemed appropriate when the show cut to commercial and previews for Wonder Woman came on—even on a meta-level this episode promoted sisterhood!

Huge credit for the success of this episode goes to the return of Cat Grant. I’ve never been a Calista Flockhart fan before, but I love her in this role, and, like Kara, I desperately missed her. Writers Jessica Queller and Derek Simon made the most of her return, offering her most of the important, substantive dialogue in the episode, as well as a series of delicious one-liners. She says what we are all thinking: that James’ Guardian mask is about as good a disguise as Kara’s glasses, that Bill O’Reilly is a creep, than women can do more than replicate the definitions of “success” that patriarchal legacies have handed us. In the season finale, she was redecorating her old office. Is it possible she’s back for good? Dare we hope?