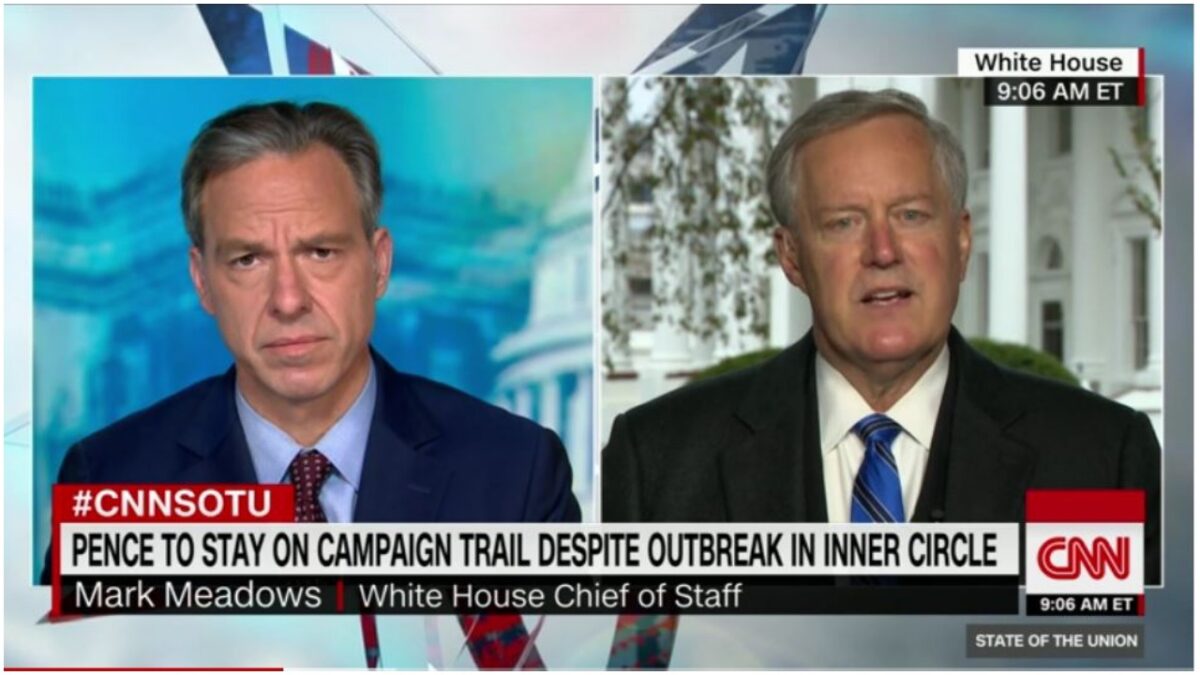 We all know that the Trump administration is doing nothing to curb the spread of the COVID-19 pandemic. But to hear them boldly admit to it, 9 days before the election, is still shocking. But White House chief of staff Mark Meadows did just that in an appearance on CNN’s State of the Union, where he told host Jake Tapper, “We are not going to control the pandemic. We are going to control the fact that we get vaccines, therapeutics and other mitigation areas,”.

After several aides, including his chief of staff, tested positive for Covid-19, White House chief of staff Mark Meadows says VP Pence will keep campaigning: "Essential personnel, whether it's the Vice President of the United States or anyone else, has to continue on" #CNNSOTU pic.twitter.com/2ZWMmwUHG3

This frank confession comes 8 months into the pandemic, when 8.6 million Americans have tested positive, and nearly 225,000 have died from COVID-19. This also comes as coronavirus cases are surging across the country, and five members of Vice President Mike Pence’s staff have tested positive. Pence and his team are, ironically, heading up the White House’s coronavirus task force.

But this second White House outbreak won’t deter Pence from the campaign trail. “I spoke to the vice president last night at midnight and I can tell you that what he is doing is wearing a mask, socially distancing and when he goes up to speak he will take the mask off and put it back on,” Meadows said. “He is wearing a mask as it relates to this particular thing because the doctors have advised him to do that.”

Pence’s chief of staff Marc Short, who works closely with Pence, was one of those who tested positive. And despite CDC recommendations that Pence quarantine for two weeks, the White House is labelling him as an “essential worker”, because campaigning is essential work now I guess.

Meadows claimed that the US wasn’t going to able to control the spread “Because it is a contagious virus just like the flu,” adding the Trump administration is “making efforts to contain it.” Meadows of course threw a 70-person indoor wedding for his daughter in May in Atlanta, GA, which doesn’t sound like much of a containment effort to me.

Many on social media took Meadows to task for the administration’s refusal to combat the virus:

Mark Meadows on @CNNSotu: "We're not going to control the virus."

The Trump admin is finally clear about their #covid19 national strategy: capitulation.

BREAKING: Trump Chief Mark Meadows just literally said they aren’t going to “control the pandemic.” What kind of f*cking attitude is that? People are dying. People are f*cking dying. And they shrug their f*cking shoulders? Vote these negligent f*cking criminals out. Vote Biden.

Mark Meadows admits on camera, 9 days before the election that the White House has given up trying to control the virus that has killed more than 220,000 Americans

Meadows admitted it: They surrendered. They capitulated.

The White House might have surrendered. But Americans haven’t.

In NY, we proved that we CAN control this virus.

And that’s what we’ll keep on fighting to do. Let’s keep it up.https://t.co/e5oQZyBaH6

Mark Meadows is one of the worst people I have ever seen in public life. Awful in Congress, worse as White House Chief of Staff. Dangerous to the country, dishonest ,radical. Imagine what a second Trump term would look like with Meadows having even more power.

Surrendering to coronavirus is a hell of a strategy for the Trump campaign. Let’s how this shakes out for them in November.