MTV Had Some New Year’s Resolution Suggestions for White Guys & Shocker, a Lot of White Guys Are Super Pissed 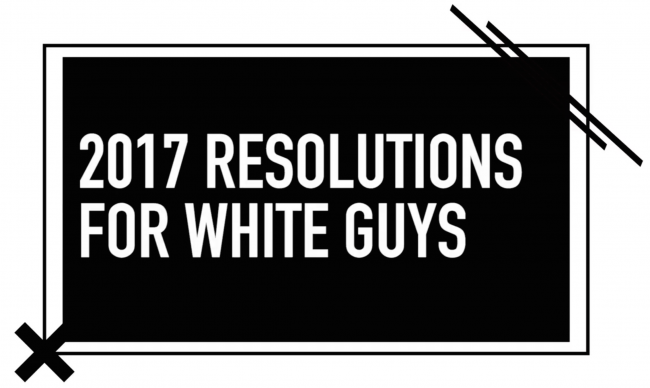 MTV posted a video this week with some helpful suggestions of New Year’s resolutions, specifically for white men. Now, these aren’t meant for every white man, of course, and most of them are great ideas for people of every gender and race to mull over—ideas like letting Beyoncé sing and speak about black issues and not get hung up on wondering why she isn’t focusing on your specific life experiences. Also, maybe stop saying “woke,” and definitely stop convincing yourself America was ever “great” for all humans equally.

Hey, white guys: we came up for some New Year’s Resolutions for you. pic.twitter.com/C9EeIY6wig

I think most of us would find it obvious that this video is 1. Humor. And 2. Not an actual attempt to lump every existing white male into a monolith that has, in every way imaginable, caused the downfall of society over the last 12 months. Right? We’re safe in assuming both of those things are true? Oh, how naive we are. Because despite the fact that the people in the video take pains to make sure everyone’s feelings are protected by couching the video with a fair serving of “nobody’s perfect” and “some of you guys do a great job!” the backlash (from, yes, mostly white guys, but not entirely) would have you believe this was the most racist video every put online.

We’re not going to wade through what all the trolls had to say, but here are just a few notable responses from white men (once again, for those in the back, THAT’S NOT AN INSULT) with big enough followings and loud enough voices that it would have been really nice if they hadn’t missed the point so spectacularly.

MTV is an anti-White, hate propaganda machine that is owned and operated by Jewish Supremacists who hate America and Christianity.#MAGA https://t.co/BrSNep7o2o

MTV’s racist “white men video” was a viral hit. That’s all the left sells – hatred. No other message. No vision. No life. A cult of death.

MTV release disgusting video lumping all “white guys” together as some kind of pantomime villain. Apparently this brand of racism is okay. https://t.co/ScZvaAz9qg

Imagine if anyone made a video like this about any other color or ethnicity. This video is so dumb it might get Trump elected to a 2nd term https://t.co/hLMpfPMGxj

@joerogan @MTVNews I’m having my skin flayed from my body in 2017. Thank you @MTVNews for reminding me of my innately polluted nature.

Yup, attempting to have a conversation about the ways in which marginalized groups exist in the world isn’t just insulting to those afraid of losing their power, it’s a “cult of death”! Oh 2017, you’re just going to be a peach, aren’t you?

(via Mediaite, image via MTV)