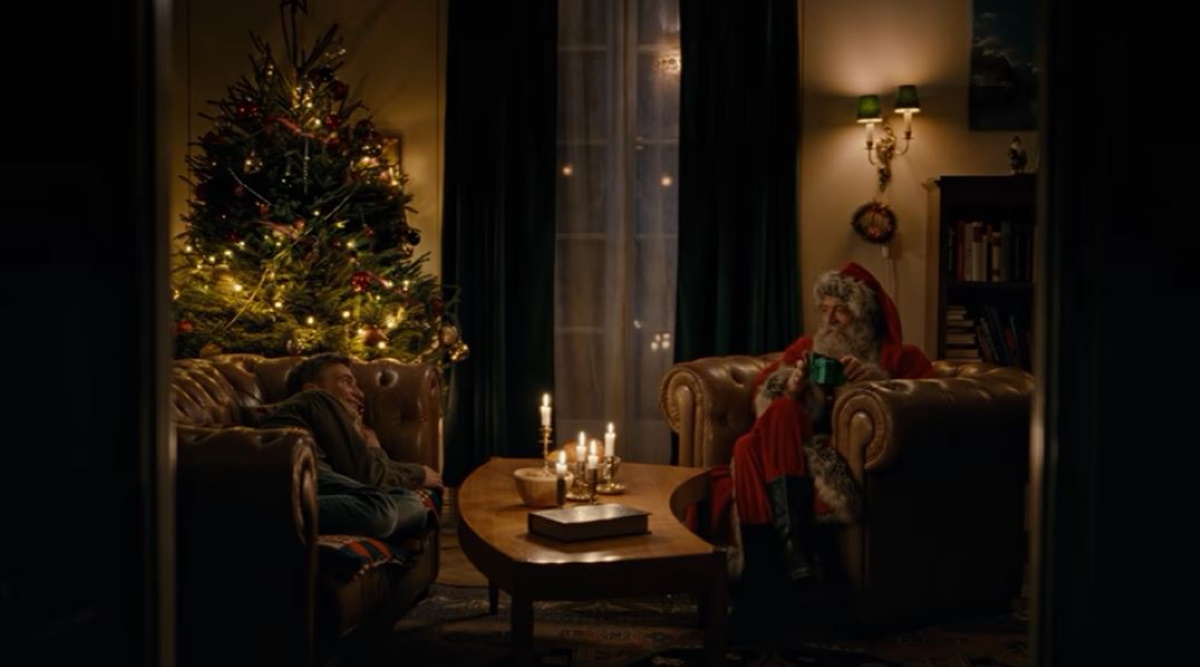 With the holiday season comes a slew of Christmas ads that make you question how you can get teary-eyed over things like coffee, soda, and cereal. One such ad has hit my radar, this time, from Norway, and from their postal service called Posten (who was kind enough to upload a version of the ad with English subtitles).

I’d watch an entire movie built on the premise of a man who falls in love with Santa waiting up for him every year, thank you very much.

A breakdown of the ad

In the ad, Harry is startled by the sound of Santa entering his house, as most adults would be, I imagine. Santa typically stops by to deliver presents to children, right? But it looks like something drew him to Harry. No words are spoken between the two, but the looks they share speak of the delightful slow burn we’re about to be in for.

We get a glimpse of Harry’s family life, which is full of wonderful Christmas memories, but there’s one thing he wants that his family can’t deliver: Santa. Over the years (since Santa only visits once) the two form a connection, Santa joking that the man snores, Harry putting on cologne as if he’s getting ready for a date (he is, omg!), but it’s hard when you’re in love with someone who can only stop by for a brief moment once a year.

Enter Posten, the postal service doing Santa a solid so he can enjoy an entire Christmas Eve evening with Harry. There’s even a classic rom-com set up where Harry’s presents are delivered by Posten so he can walk into his living room and realize that Santa’s going to stay long enough for several beard-stroking kisses this year.

The significance of the ad

At the end of the ad is a message that next year marks 50 years since Norway decriminalized homosexuality. While Norway has been called one of the world’s most LGBTQ+ friendly nations, it’s a reminder that rights for the queer community haven’t been around for that long.

50 years sounds like a long time, but that’s still within the realm of my mother’s generation. 1972 feels like a distant memory in regards to where we were with, say, technology, but when it comes to having the ability to exist as yourself? Not so much. The fact that an entire community had to convince folks to let them exist a mere 11 years before I was born is a pretty sobering thought.

In the context of this commercial, it definitely means that Santa was part of a time where it was illegal to be gay. Harry being an older man also plays into that. While we don’t know how old he is, he at least appears old enough to be aware of there being a time where homosexuality was a crime.

This ad hits me personally because I still have moments where I’m surprised to see an ad that casually shows gay couples, especially during the holidays, because I never thought I would. Part of me still has this nervous voice in the back of my head in regards to looking at comments for ads like this – not because of the obvious trolls, but because of the “well-meaning” folks who tell you how something like this would ruin the minds of their impressionable tiny tots. Having such a familiar figure as Santa fall in love with a man? I’m preprogrammed to expect some sort of petition to go around demanding that the ad be removed.

So yeah, I actually did get emotional while watching how tender this ad is, and I especially felt my ice-cold heart melt when I saw the positive reception to the initial tweet I found the ad on.

Everyone go home, The Norwegian Postal Service have won Christmas this year pic.twitter.com/I1acDUoNe5

I know there are going to be about a hundred and two-point-five million Christmas ads (and movies and TV episodes) that show some variation of meet-cute content, but there really is something special in seeing the LGBTQ+ community included in the “drinking cocoa at the fire” script in a way that lets us be loved.

Seriously, though, make this a 90-minute movie, please. I want Harry and Santa in the kitchen making cookies together, leading to Harry scolding Santa for eating the chocolate chips before they got the chance to put them in the cookie dough.