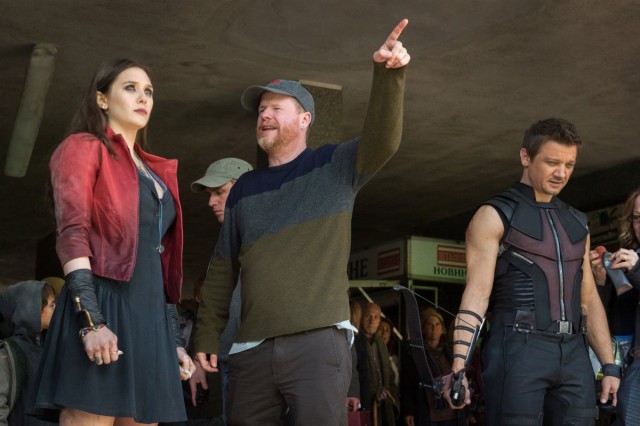 Some people who aren’t us got to speak to Joss Whedon on the set of Marvel’s Avengers: Age of Ultron a few months ago and just posted their interviews. We’re not bitter or anything.

/Film, whom we love, was sent to the London set along with several other movie reporters to speak with the director about the upcoming film. But gosh darn, can we take your place next time? We have a lot of questions that need answering!

Anyway, onto Ultron talk. Whedon touched a bit on Vision, who will be played by Paul Bettany, and the process of creating his look.

“Basically, what usually happens is, one of the guys, Ryan or one of the guys on his staff, draws something unbelievably beautiful, and we try to create that in real life, and it takes a long time. The first tests were very Violet Beauregarde. I think it really took a long time to get to a place where we felt like, even though we had a little, we will work on him in post. He walks on [set], and we go, oh, it’s Vision, my God,” he said and added he always had Bettany in mind for the role. “It took me three years before I could tell Paul that I’d had that conversation, but after that, I stopped. I was like, that would be cool if you have Ultron, and you have Vision and Paul played him.”

He also talked about his initial hesitance of jumping into a sequel to The Avengers, “My agent calls, I was in London, and he called me and said there’s a deal that’s worth talking about- time to start to think about whether there’s a movie. And I’m going, all right. I went to a pub and sat down with my notebook, and about forty-five minutes later, my notebook was filled. And I texted my agent ‘yup’ and I have so many things to say and I was kind of surprised. It took me unaware. It was very beautiful.”

If only all creative works flowed so freely, we’d all sleep happier at night. Thankfully, someone at the interview session did ask something we would have:

Where’s does Wanda fall in the tradition of the strong but somewhat damaged-by-powers characters that you’ve written in the past, like Buffy?

Well, you know, “strong but damaged by power” describes every person in this movie. It may, in fact, describe what the movie is about. You know, the more power that we have, the less human we are. Her damage pre-dates her power, and these kids they’ve had a rough history. Is she in an idiom with which I am comfortable? Why, yes sir, she is. [LAUGHS]

We’re also pretty interested to see the work of one Mr. James Spader, particularly after that trailer. Here’s what Whedon said about him and Ultron:

Ultron feels a certain distance from humanity, and the day Spader got here we put on the mocap pajamas, a giant thing with red dots on it for his eye line, giant pack, and a helmet with two cameras in his face with lights to record his performance, he then did a scene with Scarlet. But not look him in the eye because she was looking up in his eye line, and nor could he see her because he had two lights shining in his face, and he had his glasses on.

Therefore, he has a certain distance from humanity, too. And god bless him, he was wonderful. And very game. He has been the whole time. Very interested in the mechanics, to find the humanity. He and I share a genuine love of this version of Ultron, and he has an innate eccentricity in delivery that is everything that I had hoped Ultron would be.

Whedon was also asked about working with Marvel/Disney and what that means as a filmmaker:

Can you talk about the filmmaker vision and working within a big budget studio film. What is that like for you, working with Marvel? Is there a “you can’t say that or do that” mentality?

Well I’m aware of can’t do that or say that. I know that I work for Disney. I want children to see this film and not have nightmares about it. I understand the parameters, and at the same time, I don’t know of a place that would let me make a film this personal for this much money. Marvel, I feel like they treat the movies, or they have, for me, my experience of it, like they treat comic books, where when a new writer and artist comes, they have their own visual ideas and they, they respect that …. I get to make a movie that’s very much about the things I need to talk about. I forget that during the whole process because these characters are so dear to me from before, and they belong to them. But then when the thing shakes out it’s very much the movie I dreamed of, and that’s why I’m back.

And finally, what about that Hawkeye guy? What’s he up to?

In phase two, Hawkeye wasn’t around too much, and I’m curious if we’re gonna find out what he’s been up to in this film?

Um, yeah. We are. ‘Cause something’s up with that boy. That’s all I’m gonna say.

Lots, lots more to be had over at /Film.