What Feminist Ideas Can We Explore in … 10 Cloverfield Lane? Part Two.

So, when I said “tomorrow” at the end of my first Cloverfield article, what I really meant was when I damn well feel like it. So, let’s strap in, kids! Let’s talk feminist ideas in 10 Cloverfield Lane, the crown jewel (so far!) of the Cloverfield series/franchise/whatever-the-hell-it-is. And let’s also talk about Michelle, played by the fantastic Mary Elizabeth Winstead, who has become one of my all-time favorite genre film heroines. **SPOILERS FOR 10 CLOVERFIELD LANE** 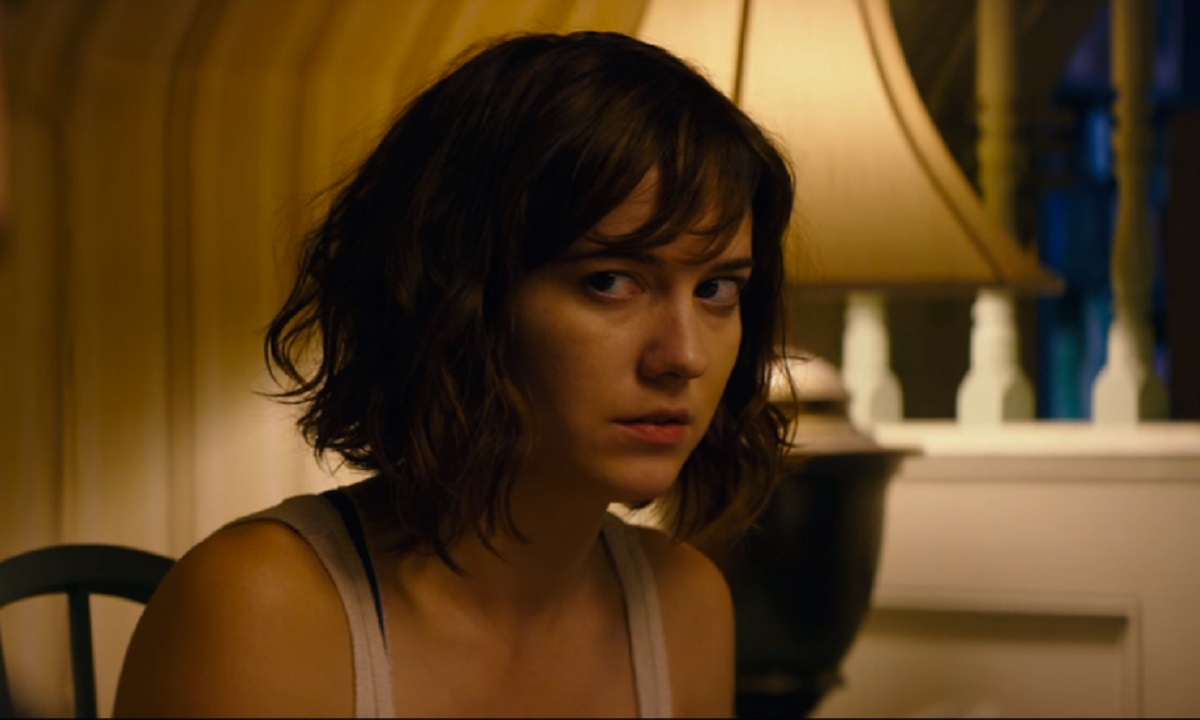 Part 2: 10 Cloverfield Lane, or On Abuse, Escape, and Nuanced Women

I mentioned in my last piece that I couldn’t help but notice that the writers and directors of all three Cloverfield films so far have been male. The fourth, too, now that we know that Overlord, the zombie WWII movie Bad Robot’s had in the works for a while is a Cloverfield film (Julius Avery directs, and it’s written by Billy Ray).

So, it would take some conscious effort on the part of all these gentlemen to at the very least, if they must deliver a male POV, give us nuanced female characters. Thankfully, writers Josh Campbell, Matthew Stuecken, and La La Land writer/director Damien Chazelle have given us a wonderful one in Michelle, with director Dan Trachtenberg skillfully showcasing some of a woman’s worst fears.

We meet Michelle as she’s quickly packing her things in a panic, constantly looking out the window and finally hurrying out the door, getting into her car, and driving away as fast as she can. We know from her phone that she’s dodging someone with a man’s name. Someone who wants her back home immediately. Her fleeing has all the earmarks of a woman leaving an abusive relationship, and this is conveyed purely through the actions in the scene and Winstead’s finely-etched performance. There’s no lingering shots of a black eye, no looking in a mirror at a fat lip. You just get the vibe of what’s going on.

Interesting then that she escapes one abusive situation only to find herself another.

After a truck hits a car and sends her flying, she wakes up chained to a mattress on the floor in a locked room, connected to an IV drip. Turns out, a dude named Howard “found” her out on the road after her accident and “saved” her. Nice, right? Well sure … if she weren’t chained to a bed and locked in a room. To compound matters, when she asks to leave, Howard says she can’t leave. Not because he doesn’t want to let her, mind you, but because there’s been an “attack” while she was unconscious, and the air is now unbreathable/radioactive/something-something.

Thankfully, she doesn’t have to spend time in this underground bunker alone with Howard. However, she’s the only woman down there. There’s another dude named Emmett, a neighbor who claims to have seen the attack happen and actually fought his way into the bunker, because he saw that Howard was prepared.

And so, right in the set-up of this thriller/horror/monster movie that the most frightening, tense, and unsafe situation for a woman to be in is trapped with men. Because let’s remember how we first met Michelle. She was escaping from an abusive man, but she had a way out. Here, she doesn’t.

But just because she doesn’t have a way out doesn’t mean she doesn’t try to find one. From the moment she wakes up chained to her mattress, she makes attempts at escape. One gets a sense of how long she may have planned the escape she eventually took in the beginning of the film: waiting to save enough money to be able to run, waiting for the right time when the man in her life wasn’t home, waiting to have a safe destination on the other end of her escape.

Down in this bunker, even at her most calm and complacent, she is constantly casing the joint, testing limits, making breaks for it when she can. She never fully accepts that this is the way it’s going to be for her, and that is the key to her ultimate survival. Thinking back on viewing the film for the first time, I realize that I never really thought she was in danger. I obviously was on the edge of my seat for much of it, but I don’t think it ever occurred to me that she wouldn’t end up leaving the bunker. She’d escaped before, she could escape again. It’d only be a matter of time.

Usually, when we talk about the male gaze, we talk about it in terms of objectifying or sexualizing women. One of the things that I think is the most feminist about 10 Cloverfield Lane is that I never felt like the filmmaker was getting his jollies. Yes, Michelle sometimes wore a tank top, but that was the extent of skin we saw. There were no lingering shots of her body, no gratuitous shower scenes, and no gratuitous love interest subplot between Michelle and Emmett.

There’s even a moment when Michelle asks to go to the bathroom (watch it in the video above), and Howard escorts her to the one she’s allowed to use. It’s in his bedroom, and it doesn’t have a door, but it does have a curtain. She’s understandably unnerved to have to go to the bathroom with him standing only a few feet away, but from his perspective, he’s doing that for his own safety, because he can’t trust that she won’t “burn the place down.”

His insistence then culminates with an exasperated, “I’m not some pervert. Just go.” And he rolls his eyes as if her being worried about something like that is the most ludicrous thing in the world. More ludicrous than preparing for doomsday, for example.

Moments like this show that you can have a female character in peril in a film without exploiting her, or exploiting the actress playing her, sexually. Watching 10 Cloverfield Lane made me think about how many other movies of this type would rely on tired tropes like villain leering or rape/assault-as-subplot. But Michelle never faces anything like that from either Howard or Emmett.

Emmett is entirely on her side the whole time, supports her in her escape efforts (paying the ultimate price for it, and dying to further her story in a reversal of the Women in Refrigerators trope), and most importantly, believes her when she says something is wrong. Not once does he try anything sexual with her. It’s just not a thing this film concerns itself with. 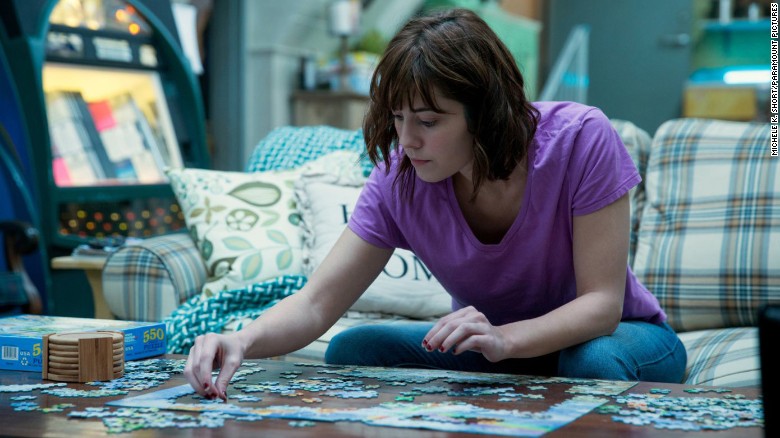 Examining the Infantilization of Women

Howard’s interest in Michelle isn’t in any way sexual, but that doesn’t mean it’s not gendered, and it certainly isn’t any less gross. Seemingly trying to replace his daughter Megan, who was taken away by his ex-wife (who didn’t seem to appreciate his obsession with preparing for the end of the world), Howard has the bad habit of capturing women and forcing them to live in a very particular version of a “wholesome” family home.

One of the first things I noticed as I watched the film (other than Mary Elizabeth’s Winstead’s badassery and John Goodman’s brilliant creepiness) was the fact that Michelle was always subtly in pink, or pink light, whereas Emmett was always in blue. Michelle in “girly” colors and Emmett in “boy” colors, hinting at Howard’s simplistic view of gender, and his desire to have a young daughter to protect.

This is a film that features a woman with her skin burning off, a dude in a vat of acid, and aliens being exploded from the inside (in one of the most bananas film endings ever), and yet the most chilling moment to me in the film was a scene in which the three characters are sitting around playing a game where they take turns getting each other to guess a word before a timer goes off.

When Emmett’s turn comes around to have to make Howard guess, Emmett points to Michelle and says “Michelle is a ….” waiting for Howard to fill in the blank. Howard’s responses? Girl. Little lady. Princess. Girl.

He cannot bring himself to say the correct answer: “Woman.”

That’s when I lost my shit, because it’s in that moment that I knew how far gone Howard actually is. He looks at Michelle and only sees his pseudo-daughter. He only sees a girl. And he’s determined to keep her a girl for the entire film, going to great, horrific lengths to do so.

Kinda symbolic, huh? That, in order to treat women a certain way, in order for a man to be capable of doing what Howard does to her in this movie, he has to take away her agency by making her not an adult. This grown woman needs to be thought of as a child, because it’s okay to tell children what to do, and as long as he doesn’t think of her as an adult, all of this is okay and justified.

Howard isn’t a pedophile, but he is something pretty terrible: he’s a misogynist who feels entitlement over a woman’s body. What’s fascinating about how this is presented in this film is precisely the fact that it’s not sexual. We’ve seen that before. This film shows that there are many ways in which men claim ownership of women, and they don’t all have to do with sex.

10 Cloverfield Lane is a fascinating look at the ways in which sexism impacts women’s lives … with a monster movie tacked on. (Seriously, though, the ending is bananas. And never underestimate the importance of DIY fashion, y’all!) It proves that making women the leads of genre films doesn’t have to involve them running around half-naked, screaming, or with any body parts jiggling. These films can be smart and substantive, even while being hella fun, and can deliver female characters that feel like people.

Feminist Lesson from 10 Cloverfield Lane: Men can be sexist and threatening even without bringing sex into the equation.

Up next time: The Cloverfield Paradox.

If you want to check out my #CloverfieldNewbie Cloverfield Marathon, where I watched all three films in this unique franchise for the first time, you can check out the play-by-play of my reactions over at my Instagram, where there are short video reviews and a highlighted story called Cloverfield Noob.