What the Hell is Going On With Amanda Palmer? 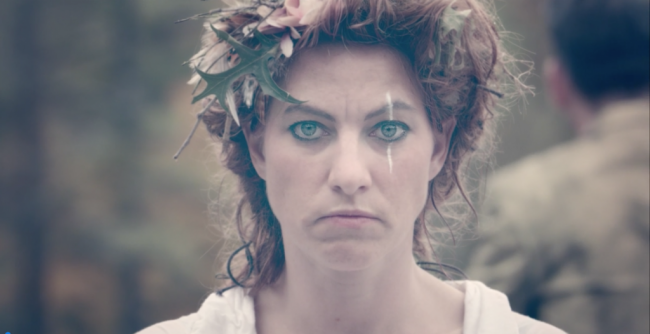 Independent musician Amanda Palmer has been trending on twitter for a few days and it’s hard to figure out why, but we’re going to try. The kerfuffle stems from an ongoing conflict Palmer has had with The Guardian newspaper and it has brought up a conversation about what kind of coverage artists deserve for progressive work. It’s been interesting to say the least.

Palmer has long been a polarizing figure in music who has established a crowdfunding model for her art that’s garnered her both respect and controversy. She raised huge amounts of money through crowdsourcing and then proposed paying local musicians in Beer and high fives. Since her marriage to Neil Gaiman she’s become a big presence on the web and not always in a favorable light.

Palmer’s art is meant as feminist, progressive and subversive…I guess. She uses nudity, profanity, shock as instruments as much as her ukulele in a confrontational mix. Her model has been for years to ask for fans to help her financially to make her music and art. She’s done this through kickstarter and now runs a Patreon with over 15,000 patrons funding her art…and other things. Here’s where we get to the current controversy.

It started earlier last week with an opening salvo from palmer on twitter claiming she had been snubbed by The Guardian Newspaper:

the guardian’s music editor snubbed the most feminist album and tour of my career, and you’ll never believe what happened next…

(or: how to fight clickbait – and other stuff – using patronage.)

{thread. please RT this one. i thank you.}

then i noticed that the guardian’s music editor had blocked me on twitter. weird, i thought. i googled. this person didn’t like my music, or, apparently, me, and had gone so far as to include me in disparaging reviews of other artists’ work as an example of What Else Was Bad.

Palmer goes on in the thread to complain about her overall lack of coverage in the media then explains her solution: she used Patreon money to hire her own dedicated reporter to cover her tour.

i hired them with patron dollars to create a piece of long-form journalism not just about the backstage world of my tour, but about the actual world we were moving through. for over two months, they traveled with me, talked with my community… pic.twitter.com/ue9P4kOIca

i don’t know exactly what kind of history we’re making here, but it feels important, and we have 15k patrons cheering us on. like i’ve always said, when the media disappoints you, don’t blame the media.

So, to reiterate, Amanda Palmer didn’t like how she was being covered – or not covered – in the press so she created her own private press to write about her on Medium. Many were quick to remind Palmer that when you are paying someone to write about you, that isn’t journalism, it’s publicity. And it’s fine for an artist to hire people to document them and build their brand, but it’s not quite the same as straight-up reporting because such an arrangement carries inherent bias.

These attacks and declarations didn’t go unnoticed by the Guardian staff and Laura Snapes, the editor whom Palmer was referring to, took to her own twitter to explain.

She then emailed me directly asking if I wanted to accompany her to the White House Correspondents’ dinner. I politely declined. I heard that she was planning on her UK tour to dedicate a section to how I had orchestrated a Guardian-wide ban on coverage of her album.

Then I get an email from a “journalist” saying they had interviewed her and she told them “in a rueful way that you were most definitely not a fan”, and would I comment. I did not, but I looked them up, and it turned out they were employed by AP directly to “report” on her tour.

I asked someone who works with her to talk to her and ask her to stop. I was assured she had promised it wouldn’t happen again. Then, today, it started again. She tweeted that we snubbed her “most feminist album”, didn’t report her tour dates, that she had lost a “press ally”. pic.twitter.com/Meuy8DXr4K

Purely from a personal perspective, AP’s entitlement during this bizarre campaign has only driven home the reasons I first blocked her. I wanted to keep a lid on all this, but I’m not having her lie about us to serve her narrative when her behaviour has been genuinely unsettling.

This all blew up, with anger and apologies on many sides and then perhaps one of the bigger self-owns I’ve ever seen:

going by that logic, you could also say that my entire album and tour is a blatantly cynical attempt at leveraging feminism and progressive politics for money.

Palmer has attempted to clear the air and apologize but the internet is still having a field day with this and bringing up many of her past sins in the process. One such sin was her use of the n-word, for which Palmer also apologized.

The big problem here is the entitlement: the idea that because Palmer is a feminist or working outside the system, she deserves coverage and accolades and attention. That’s simply not the case. Art doesn’t just need to have a perspective to be covered, it also needs to be good to make an impact in an incredibly crowded landscape.

It’s good that Palmer is apologizing, but people are still rightly annoyed to see an artist, who ostensibly wants an equal playing field for all, using her high position and power to punch down at another woman without a million twitter followers, and simultaneously demand coverage for her work. Palmer is not a struggling indy artist fighting to get her music out there, she’s a very successful artist who is married to a wildly successful and rich author.

This isn’t a good look for a privileged woman who claims feminism as her brand, but I doubt the current controversy will change her dynamic with her audience. It may make more papers cautious about covering her, but if that’s the case, she can continue to hire her own people to do it for her. But she should maybe use her own money for that and not tips from fans.

(Via: Oh No They Didn’t!, image: Screencap from the video for “Mother”)