What’s the First Piece of Media That Absolutely Terrified You? 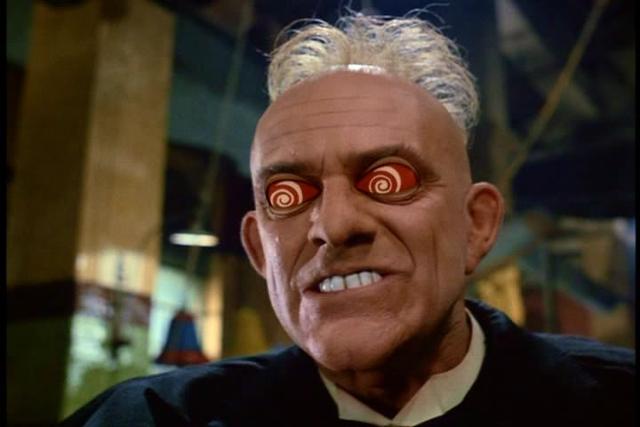 When we’re young, we’re especially susceptible to a fear-reaction, as it can be difficult to differentiate between what’s real and possible, and what’s not. We envision monsters under our beds or lurking in closets. And sometimes we read a book or see a TV show or movie at an early age that leaves a lasting, indelible impression.

I was an excitable kid, and there’s a lot of media in the pantheon of things that frightened me. I can still recite ghost stories that were told to us in the Halloween assembly in first grade. Someone let me read Stephen King when I was 11 and I still haven’t quite recovered. But movies had the biggest impact, and my earliest memory of total horror—and the realization that the world was cruel and dark—came from an unexpected place: the 1988 Robert Zemeckis film Who Framed Roger Rabbit.

Despite its Disney production, Toontown interludes and inclusion of animated characters, Who Framed Roger Rabbit is not really a movie best consumed by young children, yet there I was. And even decades later I can’t think about the scene where Christopher Lloyd’s bad guy Judge Doom murders an innocent toon without internally freaking out a little. Honestly, I couldn’t even tell you why he does it, because I have since refused to revisit Who Framed Roger Rabbit, but this scene is burned into my memory—and apparently, I’m not alone.

“One of the most chilling scenes I’ve ever seen, and it’s of Christopher Lloyd executing a cartoon character,” writes the YouTuber who uploaded the clip, Robert Griffin.

Reading the comments on the video make me feel that I’m not alone, at least, that I didn’t overreact so many years ago. (I only made it through half the scene this time around.)

Mike S.: “I can’t even hit the play button. I refuse to. I can watch people be dismembered and tortured and murdered and raped all day every day in TV and movies and read disgusting shit but I cannot handle watching this poor shoe die. Nope.”

Minori: “I watched this again yesterday. Legit cried like a bitch then screamed “WHY WOULD YOU KILL THE SHOE” in anger for 5 minutes. I wasn’t even high.”

Stephen Martell: “I always hated this scene. As a kid and still to this day it’s sad to see.”

Incog Nito: “The scene that scarred me for life.”

Commenter The King of the Penguins writes, “Fuck Bambi’s mom. To hell with Mufasa. This shoe left me more mortified than any horror movie or dramatic death scene in the history of cinema. It left me bawling every time as a kid to the point where I couldn’t even watch or hear the scene. As a teenager I watched it and started to break down when the shoe was cuddling his foot like a scared animal. It trusted him, which made it so much worse. As an adult this still hurts me, since this is closer to animal cruelty than the death of a humanoid character. And animal cruelty always hits hard considering their innocence.”

At last I feel understood. I’m pretty sure this scene is the reason I’m a vegetarian.

So let’s have a fun, light-hearted Wednesday: what did you see or read when you were young that scared the hell out of you? Tell us in the comments.