What Rory Gilmore’s Relationships Taught Her About Herself 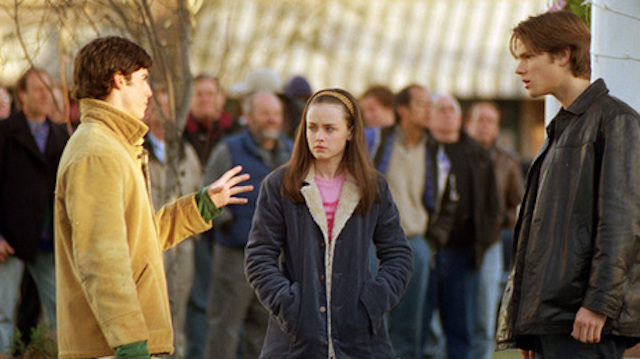 We can all agree that Gilmore Girls is a great show and that we are eagerly counting down to the revival, so what do you do in the meantime? Re-watch the show, DUH!

As I’ve been flying through season after season, I began to realize an evolution that happens with Rory as she starts to discover herself through the people around her like her grandparents, classmates, and of course, her mother. But there’s another group that, even though we might not like to admit it, was a big part of her growth: her boyfriends. These guys were far from the sole factor shaping her and her experiences, but I would argue that their relationships had a big effect on her growing as a person and discovering not only herself but also finding the confidence within herself to be the amazing, talented and independent woman she grew up to be.

Rory’s first boyfriend and her first love. He’s everything a boyfriend is “supposed” to be: kind, caring, and totally head over heels in love with Rory. Their love goes from the awkward adorableness that is your first love to full-on hand holding. It’s pretty intense, but then they get serious, like Dean-building-her-a-car serious. But something doesn’t seem right to Rory. She starts to see her interest outgrow Dean, and they begin to float away.

Dean sees this happening and tries to grab on but is too late and loses her before he even knows it. Even though they grew apart and she broke his heart, Dean was her comfort. She learned how to love and care for someone and also made herself aware that she was looking for someone who was a little more her speed and her equal, intellectually. Young love is hard when dealing with your emotions, and sometimes it doesn’t turn out they way you want, but that’s OK because growing up is hard.

Jess plays the part of the mysterious and misunderstood “bad boy,” but Rory didn’t fall for Jess because of his “bad boy” persona. He wasn’t like the other folk in her town; he was another that seemed to speak her language, and that was enough for her to overlook his flaws. He was not just smart, but he was up to her speed, which immediately attracted her to him (and vice versa). They were able to talk in a way she hadn’t been able to do with anyone else and share books, music, and movies that her friends and family had no idea even existed.

He challenged her in every way she wanted to be challenged. She was beginning to see in herself the confidence was capable of making her dreams come true, no matter what they were (i.e. being a journalist), and he reflected that strong will. She even followed a little in her mother’s footsteps in going with the boy that her mother disapproves of, though he allowed her to be confident with who she is and be proud of it. He was the quiet storm that most people didn’t understand, but Rory was patient and waited that storm out, and it was worth it—for both of them, as Rory’s influence turned out to really help Jess in the end.

He’s everything that Rory never wanted—a rich, self-important guy—but you know what they say: opposites attract. Even though I didn’t like them together, it was a relationship that allowed her to continue to grow, be her own person, and take a path that even went against what her mother believed was right and led to some hard times (no GG fan likes the era of Rory and Lorelei not talking to each other). Even though I hate to say it, Logan believed in Rory in a time when she needed it. She was truly coming into her own as an individual, and only someone who would unequivocally support her in that would do.

You do you, Rory Gilmore

At the end of the series, she decides to not be with anyone (though we can maybe count that she chooses to be with Obama), but she realizes that, at this time, she needs to be with the person who matters most: herself.

But let’s be real: the main person who truly shaped her to be the person she grew up to be was her mother. The strong bond between them could match no other and was what made the show one of a kind.

Stacie Sells is a nerd, writer and artist based in Oakland, California. When she’s not binge watching her favorite TV shows with her cats, she’s either creating a podcast with fellow comedian called Faux Reel or putting her final touches on her musical based on Keanu Reeves (called Keanu! The Musical) @stacieesells on Twitter.