What The CW's Reign Got Right: Its Women | The Mary Sue

The Most Important Thing That The CW’s Reign Got Right: Its Women 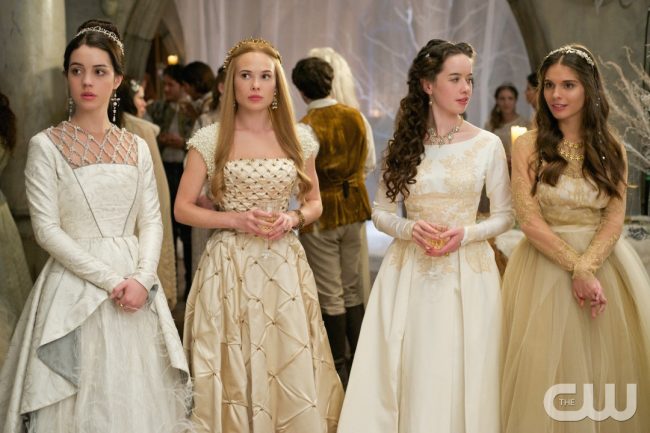 On the surface, CW’s historical drama Reign gets a lot of things wrong. Like, a whole lot. The series is based ever-so-loosely on the life of Mary Stuart, otherwise known as the Queen of Scots, and it isn’t exactly what you’d call historically accurate. It recounts several of the most basic details of Mary’s (Adelaide Kane) life incorrectly, and it frequently makes up additions that just didn’t happen at all. These include everything from embellished historical backstories and all new characters to supernatural elements like vengeful ghosts and life-threatening druid prophecies. The show even invents an illegitimate half-brother named Bash (Torrence Coombs) for Mary’s promised prince and eventual husband Francis (Toby Regbo), just so that the three can engage in the standard love triangle that usually forms the backbone of any CW series.

The show features an anachronistic, folk pop soundtrack performed by modern-day artists like The Lumineers, Troye Sivan, and Of Monsters and Men. Mary and her ladies wear positively gorgeous but completely period inappropriate costumes. (Many are strapless, sleeveless, sheer or covered in glitter. And everyone wears a sparkly headband of some type.) In a lot of ways, Reign is basically Forever 21’s idea of medieval prom come to life. So if what you want is a proper historical retelling of the life of Mary, Queen of Scots, then Reign is not the show for you.

But as the series prepares to wrap up its four-year run this June, it’s time to acknowledge the one, super important thing that Reign did right, something that it really doesn’t get enough credit for: It was always committed to writing great women. Though the series has plenty of historical and narrative flaws, it never shied away from telling a largely feminist and progressive story about female autonomy and agency. The female characters of Reign run the gamut in terms of social position, relationship status, ambition and ability. But they all must work to wield power within a world that’s been explicitly designed for men.

The show doesn’t sugarcoat their struggles–whether it’s their inability to marry the man of their choosing, own property, or exercise any significant degree of control over their own futures. And yet, despite such setbacks, Reign still presents a compelling story in which these same women nevertheless find ways to succeed, thrive and even save themselves when necessary. Sure, on a good day, this show is a gonzo, mile-a-minute festival of ridiculousness (and I mean that in the best way), full of everything from serial killers to ghost husbands. But even in the craziest, most insane moments, the women of Reign manage to shine.

Though it has a rather large number of female characters, Reign’s story ultimately centers around three women, who—not for nothing—are some of the most notorious and fascinating in history. The bulk of the story, appropriately, focuses on Mary’s attempt to navigate her life as a Queen of both France and Scotland. But it also gives significant screentime to both Mary’s mother-in law Catherine de Medici (Megan Follows), the Dowager Queen of France, and her cousin Queen Elizabeth I of England (Rachel Skarsten). These three women lead very different lives, and have very different goals and motivations. They have complicated relationships with one another and with the mechanisms of power within their countries. And while they could not be more different in terms of sensibilities and temperament, they all fight to be taken seriously as figures of power in a world that doesn’t particularly want them to have any at all.

During its first season, Reign was much more focused on Mary’s love life than her political acumen. The primary question of the show’s existence centered on whether she would choose to be with Francis or his brother Bash. Happily, someone somewhere realized that attempting to make a compelling love triangle out of a relationship with a foregone historical conclusion didn’t exactly work. (Particularly once Reign decided that–despite its love for making things up–it was going to stick to the broad strokes of history.) So Mary chose Francis, and though the show gave them other various relationship problems in its second season, the issue of Bash as a viable romantic option was never really revisited. The brothers repaired their relationship, Bash got his own storylines (sometimes), and everyone moved on. This was the first instance in which Reign demonstrated that it could evolve past its (for lack of a better phrase) CW-drama origins. Its ultimate embrace of the political story at its heart was another.

In general, the best part about the way that Reign writes women is that the show understands that they’re three-dimensional people. The three women at its center are smart, strong and independent. They love ferociously, and are incredibly loyal. But that doesn’t mean they are perfect or represent some idealized vision of a Woman Who Rules. Mary is naïve and stubborn. Catherine is selfish and greedy. And Elizabeth is reckless and rash. These are women who make mistakes, embrace poor choices, and behave as vengefully as any of the men in power who came before them did. (And this is a good thing, honestly.)

All three of these leading women must make difficult decisions and live with the consequences–to protect themselves, their crowns, or their subjects. Each of them–even Catherine, who admittedly spends a good portion of the series pursing her own personal agenda–puts the good of her nation first when it comes down to it. In short: They’re actually really good at being in power, particularly when you consider that the world they live in doesn’t actually want to give them any to start with.

Elizabeth wasn’t fully introduced as a character until Reign’s third season, and prior to that Mary and Catherine spent various parts of its first two at odds with one another. While the two of them managed to generally patch up their relationship following Francis’ death, they have something of a fraught history together. But by the time Elizabeth arrives on the scene, Reign had decided on what kind of show it wanted to be, which is not a traditional CW drama built around a love triangle that consumes itself like an ouroboros.

Instead, it embraced the depiction of women as powerful political players, in a world where history is generally written by men. How much power can these women hold on to? And how much of their humanity will any or all of them sacrificing to wielding it? Mary may struggle to master the ruthlessness needed to play this particular game of thrones, but Elizabeth is often left questioning what portion of herself isn’t driven by her life on the throne. And Catherine, who now finds herself struggling to protect her own legacy in the twilight of her power, becomes a kind of cautionary tale. What kind of person must you become, in order to achieve your greatest ambition? And can you live with the answer. This isn’t a particularly innovative sort of story, but it also isn’t generally one that women get to tell.

By the time Season 4 rolls around, Elizabeth and Mary are not only fighting for the same throne, they are fighting for the same man. Since Reign is a CW show, this isn’t that strange–women are often set against each other in pursuit of a man’s affections on this network. But the most interesting twist here? This man doesn’t matter a whit as a person. Both women only want Lord Darnley (Will Kemp) because he offers a family connection to the English throne that can be used to their advantage. He could have been a sack of potatoes, otherwise. The handsome young nobleman, as such, isn’t the point of the story for these women anymore. Their own power is. For Mary, who began the series as a young monarch who dreamed of romance and happiness, this marks a pretty big emotional and narrative shift, probably one that very few people likely expected of this series back when it premiered. And even as Reign hurtles toward the inevitable end of Mary, Queen of Scots’ story, the show makes a point to stress her determination to decide her own fate, no matter what it turns out to be. And that feels like something worth celebrating.