What Makes A Game? And Does It Really Matter? 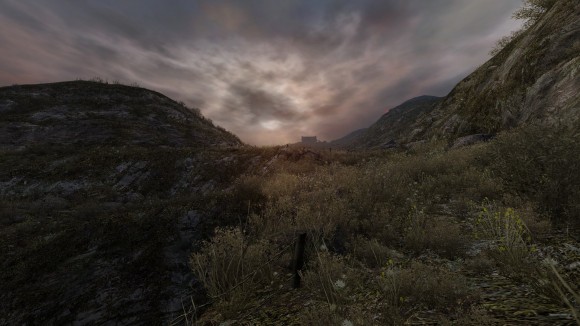 A few weeks ago, I finally got around to playing Dear Esther, an experimental first-person curiosity released earlier this year. I found myself on an eerie island in the Hebrides, accompanied only by occasional chunks of narration triggered in no particular order as I explored. The scenery was stunning, the atmosphere exquisitely crafted, the story haunting and strange — but that’s all there was to it. In Dear Esther, there are no puzzles to solve, no monsters to fight, no choices to make other than which direction to walk in. I couldn’t pick things up. I couldn’t open doors. I couldn’t even jump. All I could do is walk around the island, look at things, and try to understand the story.

That’s the question that’s been popping up constantly where Dear Esther is concerned. I’ve also seen it asked in conjunction with Thirty Flights of Loving, a “video game short story” that requires no interaction other than movement and only fifteen minutes of your time. I asked the question myself a few months back when I reviewed Cinders, my first visual novel. But with Dear Esther, I began to wonder how to go about finding an answer. Are games something we can easily define? Or do they fall into “I know it when I see it” territory?

To figure that out, let’s go back to basics. Imagine that you’re standing at a table with several objects on it: a box of LEGO bricks, a family of dolls, a chess set, a foam sword, and a jigsaw puzzle. Which of these is the game? Well, the chess set, obviously. A puzzle’s a puzzle, and the rest are toys. We can all agree there.

Now imagine that the table holds five boxes, each containing the disc for a particular software program: Minecraft, The Sims, StarCraft, Skyrim, and Portal. All games, right? But why? The point of Minecraft is to build whatever you feel like. The Sims is a glorified dollhouse with very needy occupants. Skyrim is an excuse to go whale on imaginary dragons for hundreds of hours. Portal is nothing but a series of puzzles. The intended uses of these programs aren’t any different than the ones granted by the table full of toys. If we’re going to stick to traditional notions of game design, StarCraft is the only game on the table.

What I’m seeing here are conflicting uses of the word “game.” One is a descriptor of a rule-based competitive system, the other is an umbrella term that refers to a program you have fun with. But is that all a video game is? Not quite. I can have fun with Google Earth or even MS Paint, but they’re not games. Think of a crayon box. If you’re allowed to draw whatever you want with it, that’s just free-form expression. But if you’re told that you only have sixty seconds to draw something, or that the first letter of the color you’re using has to match the first letter of the thing you’re drawing, or that you and a partner have to make a picture together by each drawing one line at a time…are those games? I’d argue yes. My thinking is that obstacle and challenge, while important, aren’t as key as structure. Games present a context, a set of rules which must be obeyed. The rules don’t have to be complicated. They just need to outline what your task is and what tools or abilities you can use to achieve it. I think that applies to every game, electronic or otherwise. Basketball. Arkham Horror. Peekaboo.

As a kid, there was nothing I liked better than playing make-believe (a pastime I never outgrew). And sure enough, my flights of fantasy always had defined parameters. When my little brother and I played Pirate Ship, the structure was clear. I was the captain, he was the first mate, and we were sailing to a haunted island. Once, when he started shooting at ghosts before we’d arrived at the island, I grumpily started the whole fiction over. He hadn’t followed the rules. The game didn’t work that way.

Dear Esther communicated its structure to me the moment the software started running: You are alone on an island. Something bad happened here. You need to get to the top of the hill to understand what’s going on. You can walk around and look at things, but that’s it. For the next two hours, I agreed to those terms. Within them, I had enormous freedom. I wasn’t sitting back and watching a story. I wasn’t passively following directions. There were no directions. Without being nudged or guided, I did all sorts of things, simple as they may have been. I spotted a small cave by the shoreline, and abandoned the path I was on to see what was inside. I tried (unsuccessfully) to climb aboard a shipwreck. I walked into the ocean and kept myself submerged, just to see if I’d die (or really, to see if I was alive). I poured over every corner of a ruined house, trying to find clues. I played.

Granted, this type of play won’t appeal to everyone, and I can see how many would find it boring. But by the same token, I don’t much care for simulation games or sports games. The styles of play they offer aren’t my cup of tea, just as other folks might not like RPGs, or shooters, or platformers. And that’s fine. What’s important is not what we’re playing, but that we are playing to begin with. Go back to that table covered in toys. If you told a kid that she could pick one item from the table to play with, would it matter what she chose? Of course not. Kids need to play, period. The format doesn’t matter. Play inspires creativity, creates happiness, and teaches valuable skills. All good things — and not just for kids, but grown-ups, too. For whatever reason, adults aren’t typically encouraged to play, and life doesn’t always give us many opportunities to do so. I don’t know about you, but I’m certainly not done pursuing the whole creativity/happiness/learning thing, and playing video games is one of my primary avenues for that.

As long as video games are giving us a way to play, does it matter how we define them? Why are we asking this question at all? Is it rooted in the same top-secret-club mentality that makes some people say that those who play casual or family games aren’t “real” gamers? Are we exploring our own understanding of this new creative medium? Is the conversation surrounding Dear Esther the modern day equivalent of standing in a museum, arguing over whether or not a painting constitutes art? Whatever the reason, from here on out, I’m not going to worry about what specific criteria are met. If something shows up calling itself a game, there’s only one question I care about: How will it let me play?