What is Steampunk, and Is It "Over"? | The Mary Sue

What is Steampunk, and Is It “Over”? 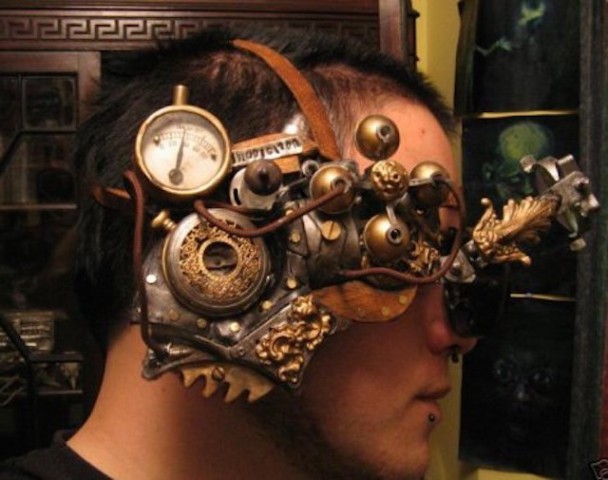 Apparently, steampunk was “over” before I ever discovered that it existed, and it seems that since I’ve been a fan, it’s died a few more times. For some reason, people who write articles about things (AKA people like me!) have been killing off steampunk for several years now, but it just keeps getting new mechanical parts attached and keeps on ticking like a well-wound pocket watch. It seems to have died back in 2010, and again just last year, and yet … I keep wearing and selling steampunk pieces and costumery at conventions, and no one has called me a zombie or a relic yet!

In fact, most people are excited to see it, even when they don’t understand what it is. There’s something appealing about re-purposed parts, jewelry with exposed cogs, and wearing Victorian-inspired corsetry with a teal-green wig. Because of my own cosplay preferences and because I’m often seated at a table in the middle of a crowded hall, surrounded by steampunk items—and also because I’m pathologically friendly at conventions—I am often asked to explain what steampunk is. To bastardize the popular “definition” of pornography: I may not know definitively what is steampunk, but … I know it when I see it. I’ve even been informed that steampunk is over and outdated (while selling steampunk items to customers) at my table. The steampunk Iron Man, the steampunk vampire lady, and the guy who rigged his own mechanical wings would help me to beg to differ, good sirs and madams!

Okay, so what the heck is steampunk, and where did it start? Fair enough. Steampunk has its roots in the Victorian era and the fantastical works of such authors as Jules Verne (Around the World in Eighty Days, The Steam House, and 20,000 Leagues Under the Sea), H.G. Wells (The Invisible Man, The Time Machine), and even Mary Shelley’s Frankenstein to some degree. The elements of time travel, mad science, combining the natural with the mechanical, and a neo-Victorian aesthetic are common, but not mandatory.

When steampunk first became a “thing” people were talking about, there were, as there always are, people who took things much, much farther than most would. You don’t have to steampunk the whole house just because you enjoy the aesthetic (but you sure can if you want to and have the time and the means!). Sometimes, enjoying steampunk is as simple as wearing a cool steampunk necklace with your regular clothes to work. As always, please keep in mind that my opinions do not define steampunk and that differing levels of investment in the steampunk community are possible and welcome!

I like to tell people that steampunk is like a what-if issue in comic books, except for a historical period. The basic premise of steampunk is that the Industrial Revolution either didn’t happen or happened differently, so instead of combustion engines and coal, clockwork and steam power the world. Time travel, steam power, clockwork, airships, goggles, mad science, and Victorian-inspired fashions are common tropes in steampunk, although there is a lot of flexibility there. Jeff Vandermeer’s book, The Steampunk Bible, cleverly assigns steampunk a formula as a means of explanation:

Steampunk encompasses a sense of longing not for the actual past, but for a futuristic past that never was, and turns that longing into artistic expressions of music, literature, art, and entertainment. Steampunk is an aesthetic, but rarely a lazy one. The DIY and repurposing aspects keep steampunk a flexible, malleable form of expression with a spirit of adventure. Often, steampunk combines the Victorian era’s fascination with the natural world with the entrepreneurship of invention, giving way to such creations as the mechanical creatures in Nantes, France, the Nautilus, a submarine modeled after sea creatures in 20,000 Leagues Under the Sea, and even reinterpretations of mechanical singing bird boxes. 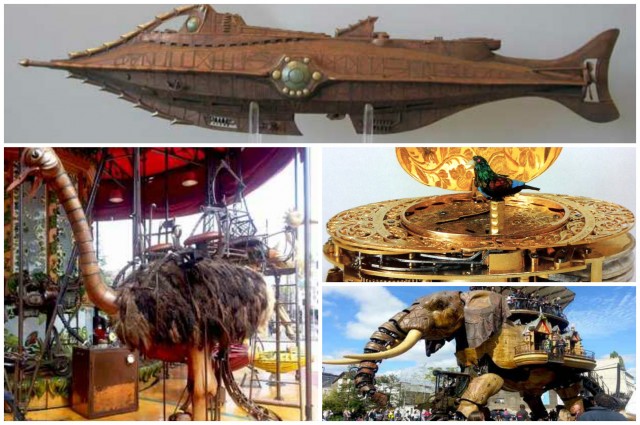 Mechanimals? I think I made a word! I like it. (via)

Steampunk doesn’t always adhere to a Victorian aesthetic/location. Popular alternates are the American West, science fiction or fantasy that takes place in space or on another planet, and alternate dimensions/universes within established canon.

Things that are “over” are not literally everywhere in popular and nerdpopular culture, as steampunk is. There are books, bands, and television to explore! Book things first. If you want to read something steampunk, I have some recommendations for you!

There are tons of other steampunk and steampunk-inspired books out there. Some other recommendations include author Philip Reeve’s Mortal Engines Quartet and the Fever Crumb prequels, Gail Carriger’s The Parasol Protectorate series, as well as Philip Pullman’s His Dark Materials series. Different books definitely embrace different aspects of steampunk, so don’t expect homogeneity across the individual series.

So … books are the easy part! Now, we’re off into music territory. What does steampunk sound like? Can a band be steampunk, too? I like to think, like with literature, that musicians can embrace a steampunk aesthetic, cover certain topics known to attract an audience that enjoys steampunk, and can make use of instruments and sounds from other eras, or even create new ones. A band can have a steampunk song, but not consider themselves an entirely steampunk band. So, to avoid pigeonholing the musicians and their fans, I’m going to just say that there are certain groups that embrace the aesthetic more than others and make recommendations based on that.

Of course, there are other bands with varying degrees of steampunk influence, but these are my top three recommendations to begin exploring steampunk through music. All three of these bands are currently working, recording, and have multiple albums available for purchase, which I would consider yet another sign that the rumors of the death of steampunk have been greatly exaggerated. Dead bands tell no tales, and these bands are spinning yarns like Clotho, Lachesis, and Atropos just ain’t no thing.

The steampunk aesthetic has been finding its way from literature and music into mainstream television and movies as well. Howl’s Moving Castle, the Hayao Miyazaki movie based on the novel by Diana Wynne Jones, borrows heavily from steampunk. The moving castle even seems to kind of have a face, if you look at it a certain way, calling to mind such Victorian and neo-Victorian fascinations blending the natural and the mechanical. The moving castle is powered by Calcifer’s magic and essence, the blend of nature, magic, and science that embodies steampunk. 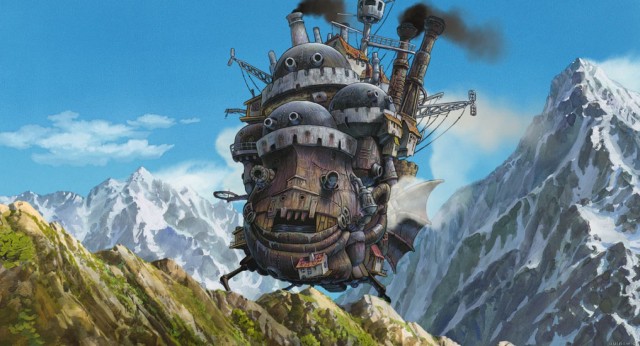 Powered by magic, steam, and … some heart. Yeah.

Hugo, the 2011 movie based on the novel by Brian Selznick, embraces the steampunk aesthetic in its fascination with clockwork, particularly with the automaton. 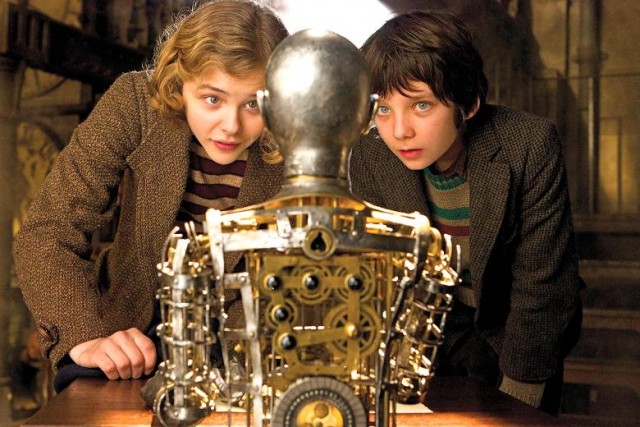 So … are we steampunking right now? Yes. Yes, I believe we are.

Warehouse 13, the SyFy series that ran from 2009-2014 (kind of a long time for a SyFy show) featured steampunk more heavily than any other television show I can think of. From Tesla to Farnsworth to a female H.G. Wells, Warehouse 13 kept the gadgetry and neo-Victorian-mad-science going for almost five years, which, in SyFy Network time, is comparable to like, a decade or something, right? Time travel joke, anybody? 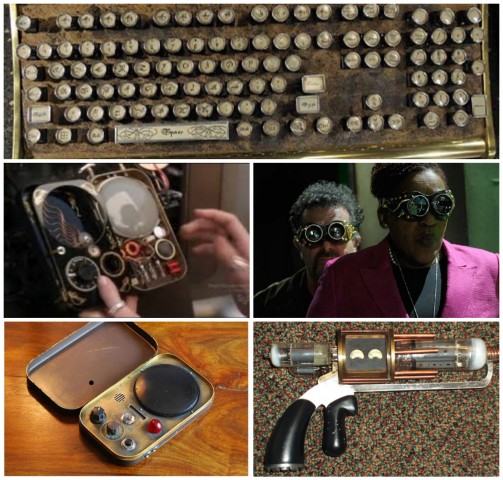 Other examples of steampunk in popular culture could include the Robert Downey Jr. Sherlock Holmes movies, which I am convinced is the inspiration for all of the steampunk Iron Man cosplay I keep seeing. Seriously, Google it. There is some amazing cosplay talent at work there! Sky Captain and the World of Tomorrow, Jack and the Cuckoo-Clock Heart, Atlantis: The Lost Empire, Steam Boy, Wild Wild West, The League of Extraordinary Gentlemen, Tin Man, and The Golden Compass all contain at least elements of steampunk or steampunk inspiration, and that, to me, is evidence that steampunk is not dead, but going strong and integrating itself seamlessly into increasingly mainstream areas of society. The Game Show Network released a reality TV show called Steampunk’d just this year, where DIY steampunk enthusiasts, crafters, makers, etc. compete against each other for prizes.

One of the best things about steampunk is that, as a rule, its fans are not afraid of making fun of themselves. Humorous acts such as Professor Elemental, a self-described chap-hop rap artist, make songs like “Fighting Trousers.” Also, Reginald Pikedevant’s “Just Glue Some Gears On It and Call It Steampunk,” pokes gentle fun at steampunk culture and the troubles that arise as its popularity increases.

And, no one should go through life without laying eyes on Katherine Stewart’s Lady Has Bustle, a fabulously body-positive parody of Baby Got Back, that never, ever fails to crack me up. Especially the part at about the 2:25 mark about how too many steampunks are so hung up on trying to define steampunk that they fail to understand that at the end of the day, it’s all about having a good time.

*Previously, I had stated that the song, “Just Glue Some Gears On It (and call it Steampunk) was by Professor Elemental, but it is, in fact, by Reginald Pikedevant. Apparently, this mistake is so common that Mr. Pikedevant has actually written a song about it. Have a look at Belated Introduction if you are so inclined!