2020 sucks. But guess what? Now we have more Baby Yoda content to keep us humble and happy while stuck in quarantine. And each week, I will be compiling a “what’s the baby doing” sort of catch up where we just talk about everything that Baby Yoda is doing in the episode.

Why? Because Baby Yoda is one of the only delights we have and because 2020, again, sucks. So watching this baby live his best little life and zoom around with the Mandalorian is exactly what I need and want to talk about. And let’s be honest, who doesn’t love Baby Yoda? If you hate Baby Yoda, have you asked yourself why you hate joy?

**Spoilers for The Mandalorian “Chapter 9: The Marshal” lie ahead**

First, Baby Yoda is rolling up with his squad (Mando) to find out some sweet information.

While there, he’s watching a fighting match happen! But he’s just a baby!!!

Don’t worry though, when the real fighting breaks out, the Child knows that it is time to hide.

Throughout the season 2 premiere episode, Baby Yoda is reaping the benefits of being small, adorable, and easily concealed within objects when the danger starts. It’s an ideal way to be.

But this time, Motto doesn’t get to watch Baby Yoda. He has to go with his Dadalorian to find another Mandalorian in Mos Pelgo (a town called Freetown). On the journey, Baby Yoda is still having the best time. He goes “WEEEEEE.” We vaguely remember what it’s like to have the wind in our hair.

Once they get to Freetown, he’s just minding his own business playing with a pot while his Space Dad and Tim Olyphant have a nice conversation. He’s in his own little world and does not care what is happening around him, and honestly, it’s iconic.

But his curiosity is short-lived because the ground starts shaking and the Mandalorian learns that Freetown is plagued by a dragon worm that keeps popping up and eating things. But baby is too small! He scare! So he hides in a pot. Who wouldn’t?

Now that the Mandalorian knows that there is a dragon worm (this thing has a name but he’s dragon worm to me) in town to eat everyone, he decides to help Timothy Olyphant take him down so then Tim will give Mando the armor he has that doesn’t belong to him.

Dadalorian decides this is a good deal and takes it, so Baby gets to go on another speeder ride to see where the dragon worm lives. Such freedom.

While the grown-ups/people under 50 (he’s a baby boomer!) deal with important issues and relationships between the Sand People and the villagers of Freetown, Baby Yoda is chilling. This isn’t his territory, he can’t do anything but look cute. But he does hide when he’s not sure what’s going on.

When Baby Yoda learns that his Dadalorian is going to take him and Timothy Olyphant to go and talk with the Tuskens, keeping safe is still the priority. Hanging out in the protection of Mando’s legs (he’s literally hiding underneath him as he’s sitting), Baby Yoda is minding his own business as the adults fight.

But when the Tusken and Timothy Olyphant get into a heated fight, Mando has to use his blow-torch to get them to settle down and Baby looks up at the fire like “wow amazing.”

While all the adults/people younger than him are working on a plan, Baby Yoda is vibing ’round town. Doing whatever babies do while all the adults move explosives around so that they can try to blow up the giant dragon worm attacking all their livestock.

(Pretend this picture is from when he’s just vibing and not at the beginning of the episode. I wish we got to see Baby Yoda just chilling in Freetown.)

My favorite part of this entire episode is that Baby Yoda probably could have helped them with his force powers but instead, he just hangs out during the big battle of the Tuskens and the villagers vs the dragon worm. He’s like “you guys got this, I shall simply watch.” But when he thinks that his Dadalorian is in danger, he does start crying. We cannot overstate how much Baby Yoda can encompass a range of 2020 moods. 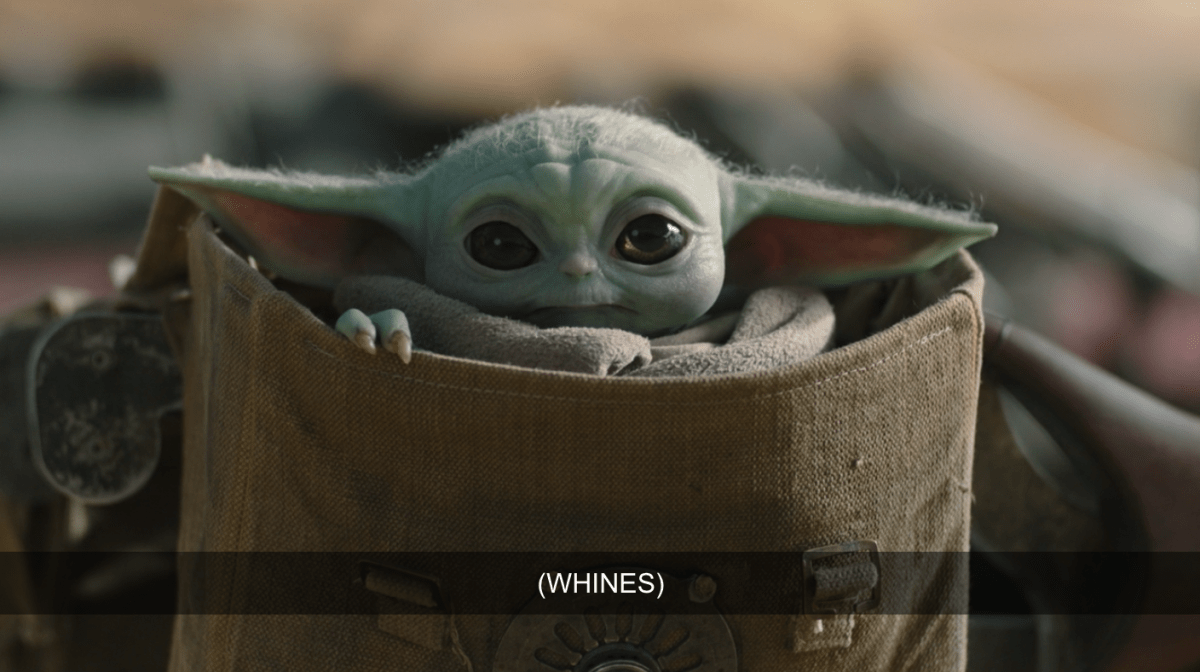 In the end, when Baby Yoda has had a hard day watching from his little bag, he gets to at least take some dragon worm meat home with him. It’s the little things.

And that’s the adventure that Baby Yoda went on this week on The Mandalorian. Check back next week when I explain what happened to my son on the latest episodes.