Thousands of Wells Fargo ATMs Crashed Yesterday, and No One Knows Why | The Mary Sue

Thousands of Wells Fargo ATMs Crashed Yesterday, and No One Knows Why 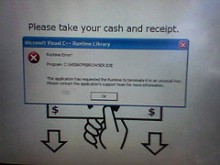 Apparently, Wells Fargo banks nationwide experienced the ATM equivalent of FlashForward yesterday when “a majority of the bank’s 12,000 ATMs nationwide crashed,” going down in the afternoon and failing to recover well into the evening. And according to the Star-Tribune, Wells Fargo still doesn’t know the cause.

“All we can say is that we’re aware of the situation and we’re working to resolve it as quickly as possible,” said Peggy Gunn, a spokeswoman for Wells Fargo. “We apologize to our customers.”

The Wells Fargo ATM failure is unusual — both in its size and duration, say experts. Normally, ATM outages occur for one or two hours and are isolated to particular regions of the country.