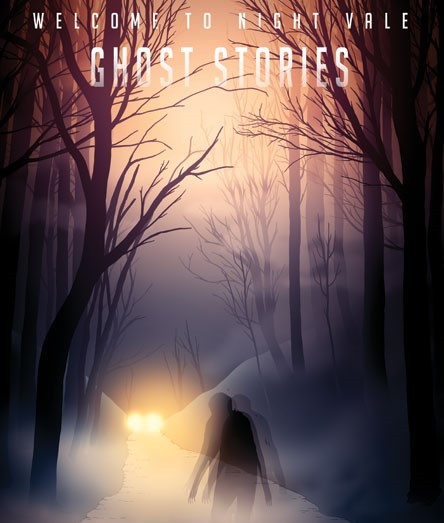 While I’ve done my best to avoid specifics, this review does contain general information about the structure and themes of the show. If you want a completely spoiler-free review: It’s really good! I teared up a little! Go see it! If you want a few more details, then read on for words so glowing you might be tempted to shout “All Hail” by the end of them.

I’m fairly new to the town of Night Vale (feel free to greet me with a friendly “Interloperrrr!” if you’d like). Fellow TMS contributor Vrai convinced me to give the show a try last August, whereupon I fell hard for its likably flawed protagonist, diverse cast, offbeat humor, and casual weirdness, blazing through the entire series in a little under two months. Since then, I’ve become a Weird Scout, picked up some sweet WTNV merch, tossed around wild theories with friends, and attended a book signing event. (But I definitely didn’t go as one part of a genderswapped Cecil/Kevin duo for Halloween or design WTNV/Utena crossover art or create a Spotify playlist in loosely chronological order so I could relive the stories of Night Vale in song form—no no, certainly not. That would be ridiculous.)

Point is, I have a lot of love for this series, so I was thrilled to finally see my first live show when “Ghost Stories” floated through Chicago in April. And with the crew gearing up for the second part of their U.S. tour in July, now seemed like a good time to let others know about it, too.

If you’ve ever attended or listened to a WTNV live show, you’ll know they’re basically set up like lengthier, canonical, but only loosely chronological episodes, featuring musical performances and surprise guests who can change from show to show. (Mine was a little sparse, but the ones we had were lots of fun, and I’m looking forward to hearing the parade of “bonus tracks” on the eventual recorded release.) “Ghost Stories” is the same, so if you’re not entirely caught up with the podcast, you don’t need to worry about plot points getting spoiled other than general “oh I guess those two are a couple”-type details.

That said, “Ghost Stories” isn’t quite as newbie-friendly as the previous two shows (“The Librarian” and “The Investigators”), which were built around audience participation and drawing more people into the WTNVerse. You won’t be lost or anything, but the central story hinges strongly on knowing and caring about the characters, so I doubt it’ll have the same impact if you haven’t listened to any of the podcast. (Although, I mean, you totally should listen to the podcast, because it’s great.)

Whether that’s a positive or a negative is up to you, but for me, it was very much a positive. While I enjoyed the last two live shows, they were like fun, spooky filler; entertaining but inconsequential. “Ghost Stories” is more in-line with “Condos” and “The Debate” in that it adds depth and breadth to Night Vale and its citizens, filling in gaps and providing some emotionally satisfying reveals for fans. But where “Condos” and “The Debate” were about expanding the world in front of and around Cecil (our radio host protagonist), “Ghost Stories” is very much about expanding the world behind and within him.

As the show’s title suggests, the citizens of Night Vale are telling ghost stories. The town is having its annual, mandatory ghost story contest, and something horrific will happen to the winner. Cecil is of course very excited about this and hopes he wins. Interspersed with regular radio segments (the horoscopes are a particular delight this time around), guest actors come through to share ghost stories both silly and suspenseful, and Cecil sporadically spins his own story as well. But, like a traveler driving past an abandoned mill on a winding road in the middle of the night, the tale takes some unexpected turns.

Fitting with its structure, “Ghost Stories” is less about the stories themselves than about what they reveal about the storytellers: What frightens them, who (if anybody) they see as the hero, and how the past echoes into the present, influencing each individual for better and worse. There are literal specters in Night Vale, but there are just as many figurative ones, and it’s the latter who take center stage here, culminating in a powerful third act that’s heartbreaking and hopeful in equal turns.

Baldwin is also a terrific live performer with a masterful grasp on volume and timing. He speaks not just at his audience but directly to them, his cadence a poetic rise-and-fall punctuated by pregnant silences that filled our theater as totally as his words did. He is asked to carry this show, and he does so magnificently. At the risk of over-hyping it, I walked out of “Ghost Stories” a little short of breath, emotionally stuffed and already reevaluating past events, my understanding of certain characters deepened in surprising and affecting ways.

Welcome to Night Vale is at its best when balancing the weird with the mundane—the apocalyptic with the everyday, the creepily inhuman forces with the achingly human responses to them. “Ghost Stories” strikes that balance beautifully, making it a worthwhile and even integral addition to the Night Vale canon. It’s funny, it’s spooky, it’s sad, it’s sincere. It’s quintessential Night Vale and I absolutely loved it. Go see it if you can. This one’s well worth a little road trip.