What are those Hollyweird goofballs thinking? We don't even have a Gummi Worms movie yet! 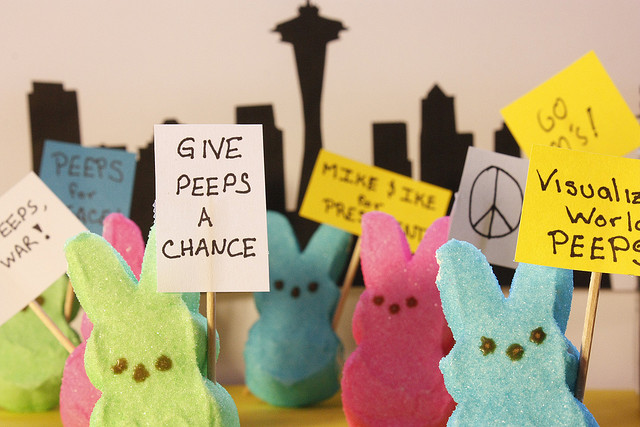 “Let’s do Pirates of the Caribbean, but with glockenspiels and scary dolls” is a pitch that apparently sounded great to Disney because the “It’s A Small World” ride is going to have its own movie franchise. Not weird enough for you? Good, because we’re probably getting a Peeps movie as well. Yes, a film about sentient marshmallows! This is truly a magical time to be alive!

Deadline reported yesterday on the 50th anniversary of the famous (and famously creepy) ride that Disney has hired Jon Turteltaub to direct an “It’s A Small World” feature. Jared Stern pitched the movie and will likely write the script. Stern, Turteltaub and The LEGO Movie’s Dan Lin will produce what Deadline says is envisioned as a “potential franchise for the studio.” Turteltaub has directed Cool Runnings and the National Treasure franchise (among other things, yes, but those those two credits make for fascinating juxtaposition).  Jared Stern wrote the screenplay for Mr. Popper’s Penguins and The Internship, and will reportedly be working on The LEGO Movie 2.

In other bizarre news, Deadline is also exclusively reporting that Peeps are the latest inspiration for a possible LEGO Movie-esque feature. Adam Rifkin (Detroit Rock City, Underdog) was inspired by The Washington Post’s peep diorama contest to make a movie about the Just Born candy company’s beloved marshmallows. Deadline says the movie will be set the night before a Peep diorama contest, when a “wayward Peep” gets displaced from his display and must find his way “home”.  Rifkin may be scraping the bottom of the barrel, but at least it’ll taste like marshmallow fluff.

But don’t expect Peeps: The Movie to rake in those bennies the first weekend: everyone knows Peeps are so much better when they’re stale. Rimshot!

(via Deadline and Jezebel, image via Great Beyond)