Helllooo! Mrs.Doubtfire Sequel In The Works | The Mary Sue

Hellloooo! Mrs.Doubtfire Sequel In The Works

Hopefully Mrs.Featherbottom won't be too threatened. 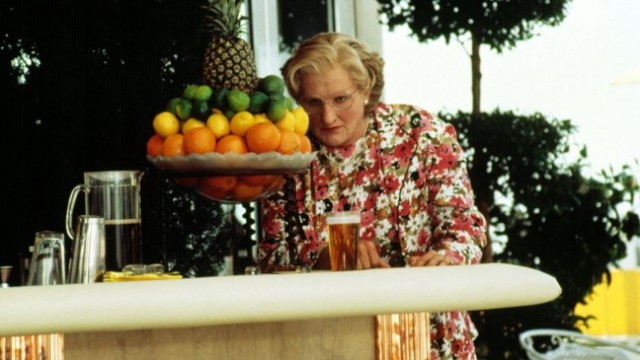 Great news for  ’90s babies who were alternatingly charmed and horrified by Robin Williams’ memorable role as a divorced Dad with an unconventional way of getting close to his kids. Talks of the long-awaited Mrs.Doubtfire II were never dead, just on hiatus… and a new movie may soon be bustling in to a theater near you.

The Hollywood Reporter revealed yesterday that the sequel, originally mentioned in 2001, now has a new writer attached to the script: David Berenbaum, the writer of Elf, The Spiderwick Chronicles, and Haunted Mansion. Robin Williams and Christopher Columbus, the director of the original box office hit, are both signed on to return.

The 1993 gender-bending tale of theatricality and family dysfunction garnered $219 million domestically and $222 million internationally, as well as two Golden Globes (and I’m not talking about Euphegenia’s ample bosom.)

Due to the movie’s financial success, Fox has been trying to start work on a sequel since 2001. Bonnie Hunt was originally slated to write the script, but the plans quickly lost momentum. Now Elizabeth Gabler and Marisa Paiva are overseeing the project for Fox 2000, and although little is definitive yet (though Mara Wilson is already on record as saying that she will not be involved),  it sounds like Doubtfire fans can expect, as always, love to prevail.

In celebration, here’s the trailer from the 1993 film–although do any of us really need an excuse to watch Robin Williams talk about his hot flashes?

(via The Hollywood Reporter, image via Centurion)