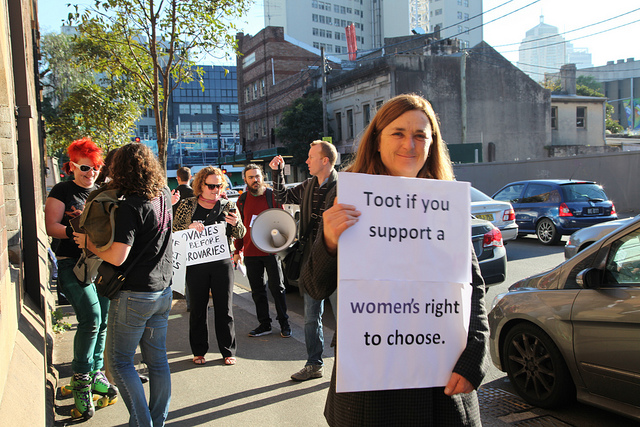 Oh, what a week it’s been in states across the country. Amidst a national health care battle to keep Planned Parenthood funded and not throw more than 20 million Americans off health care, as well as shocking discrimination toward the LGBTQ community from the Trump administration, all kinds of legislation good and bad soared through state legislatures. In one case, a federal judge even intervened.

No matter where you live, it’s important to stay in the know, and we got you covered.

Obviously, a lot of problems arise when there’s only one abortion clinic left in a state, a situation, which is currently the situation for seven states—including Kentucky. These problems include increased costs and inconveniences for travel, and delayed and often more expensive abortions as a result of this.

But as intense, vitriolic protest in Kentucky’s last clinic, based in Louisville, demonstrate, another problem is that anti-abortion extremists can focus their full efforts on harassing one clinic. Last week on Friday, the anti-choice group Operation Save America, which has likened abortion rights to a modern Holocaust and claimed the Louisville clinic has killed 59 million babies, announced that it would play a video of an abortion on a “jumbotron,” and a federal judge responded by permitting the clinic to establish a temporary buffer zone around the clinic.

Buffer zones, which prohibit protesters from positioning themselves directly outside clinics, are controversial among free speech advocates, despite how they exist solely to protect women and clinic staff’s right to privacy and safety. There’s a long history of extremists who have it in their minds that clinics are literal murder scenes attacking abortion providers and setting fire to clinics.

Free speech is arguably the most fundamental right there is—but it’s a right that has to be balanced with the right to bodily autonomy, and the right to safety in one’s person. Kentucky’s last clinic faces an uphill battle when it comes to surviving intense pushback by the state’s abortion opponents, but the federal court’s latest decision offers some affirmation for the time being.

In another notable victory for abortion rights this week, King County in Seattle, which boasts at least eight of the state’s crisis pregnancy centers, will now require these facilities to post signs that state they are not health care facilities outside. The decision arose after a contentious town hall in the Seattle area.

Across the country, dozens of states continue to fund crisis pregnancy centers, known as CPCs, that deceive and emotionally manipulate vulnerable pregnant women. In many cases, CPCs can cost women more money by luring them into their facilities by offering free ultrasounds, as many states require women to have ultrasounds before they can have abortions.

CPCs also tend to be sites for trauma, emotional abuse, pseudoscience and propaganda. If they have to operate at all, they should at least be required to be honest about the work they provide.

Texas bill suggests women are planning their abortions ahead of time

This week, the Texas state legislature voted on a number of bills, each of which will further restrict abortion access. The state passed one bill that prohibits local and state government agencies from contracting with abortion providers and their affiliates.

Per the Texas Tribune:

“State and federal law already prohibit tax dollars from paying for abortions, but SB 4 by state Sen. Charles Schwertner, R-Georgetown, would broaden that ban to include any financial contracts—such as lease agreements—with clinics that are affiliated with abortion providers but don’t actually perform abortions. Such clinics provide other health care like HIV and family planning services, and breast and cervical cancer screenings.”

Additionally, the legislature passed another bill that will require women to pay a separate premium on their health insurance if they want their insurance to cover abortion. Some Democratic lawmakers in the state pointed out how this policy suggests that women plan to have their abortions ahead of time, feeding the typical anti-abortion narrative that women want to have abortions the way children want candy.

“Nobody plans for an abortion, but we surely darn well know that it’s not a woman who is pregnant after a case of incest or sexual assault,” state Sen. Sylvia Garcia, D-Houston said of the bill.

And this week in Indiana, while the state somehow managed to retain six abortion clinics through former Gov. Mike Pence sharply anti-woman term, one Merrillville-based Planned Parenthood clinic was forced to halt its abortion services after losing its only doctor with hospital admitting privileges.

According to Guttmacher Institute, Indiana is among eight states with an enforceable hospital admitting-privileges requirement. The law exists to both further stigmatize abortion and inaccurately portray it as dangerous, and also force the shutdown of clinics that can’t afford to meet these requirements.

In either case, Planned Parenthood of Indiana and Kentucky CEO Christie Gillespie doesn’t seem too concerned. According to Gillespie, the clinic will soon be able to perform abortions again, the Northwest Indiana Times reports.