We've gotten a lot of junk mail promising the same thing, so we're kind of skeptical. 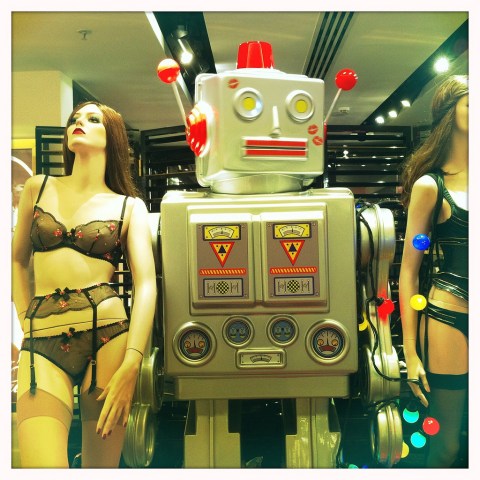 According to panelists Jay Morgan and Billie Whitehouse, who both helped to design the product, “Fundawear” (oh god that’s an awful name this is already a terrible idea) is meant to satisfy partners across long-distance relationship. Basically, it’s underwear that’s covered in tiny haptic electromagnetic vibrators which are in turn connected to a smartphone app. When someone touches the template on the app, the person wearing the underwear feels a “momentary sensation” on that part of their body.

Morgan and Whitehouse came up with the concept with the help of Durex, a brand that’s apparently very eager to begin associating itself with innovation. I guess nobody told them that people in long distance relationships don’t necessarily need condoms when they’re touching each other across the Internet with special underwear, but okay, Durex. We see you over there trying to be GE, and we applaud you for it. They unveiled the prototypes yesterday (not pictured above due to rights issues) at the afore-mentioned panel and even hired a pair of attractive models to wear and test the product for a crowd of strangers.

It’s a very light vibration, like a touch,” said Eugenia, one of the models. “It depends on how you touch […] If you slide, it’s like a stroke.” As she explained, the two models did not know each other prior to the event, and so each controlled their own underwear. So, you know, good news for unbearably lonely people who don’t have significant others across long distances — you can use the underwear for yourself and just pretend you have an invisible robot boyfriend instead.

So when will you get a fancy electronic bra of your very own? Morgan says that Durex’s Global Product Development Team is currently looking into the possibility of putting this underwear into production. If that happens, a decision will be made sometime in the next few months. If not, then we guess you’re on your own

(via IEEE Spectrum, image via AKA)