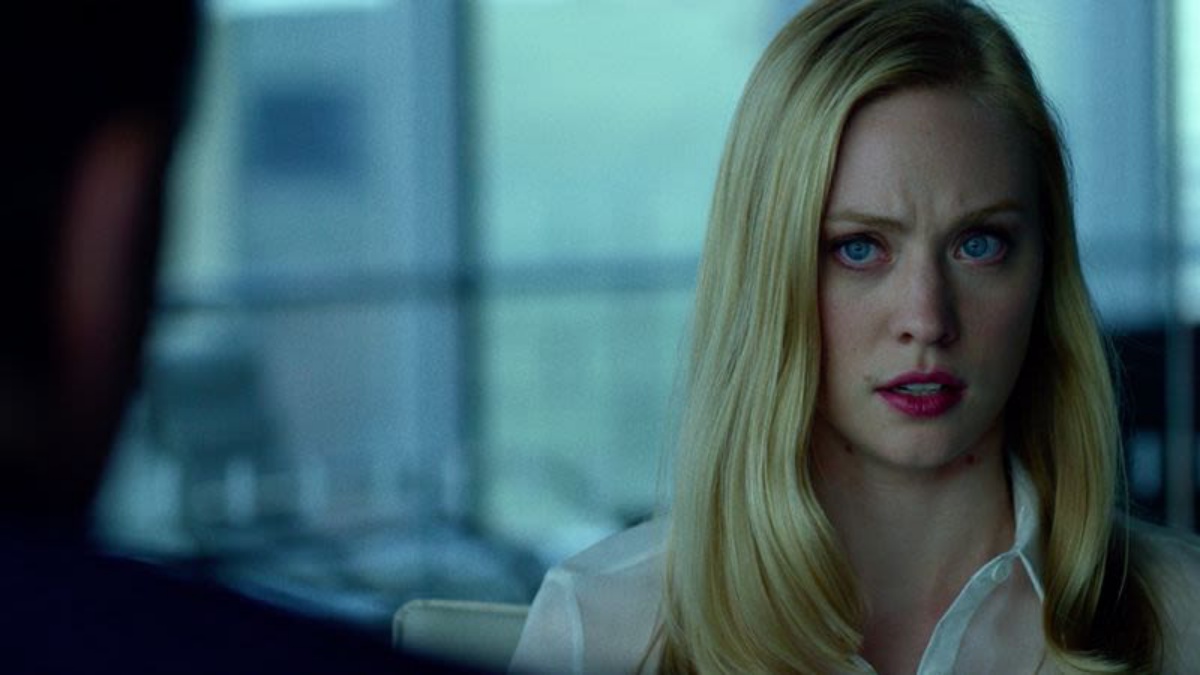 Karen Page. Sometimes I root for her, other times I detest her. This season of Daredevil, those emotions were like a constant back and forth. At the end of the season, I realized that, for all the ways the show has improved upon her comic book incarnation, she’s still just not that great of a character—at least not one for me to root for.

**Spoilers for Season 3 of Netflix’s Daredevil.**

Karen’s backstory, the tale that was promised to us, finally unfurled in the aptly named episode “Karen.”

So what is the tragic, mysterious story that’s been teased to us throughout the show’s run?

Before she moved to New York City, our Karen was a Vermont girl selling cocaine with her basic boyfriend, Todd, as she danced in her bra to “Freek a Leek” by Peaty Pablo (peak 2000s). Her father, Paxton Page, ran a down-on-their-luck diner with her and her younger brother, Kevin, holding it together.

Now, I hate to call Karen annoying, because to a degree, she’s right that her father has unrealistic ideals about the diner, and it’s clearly not a life she enjoys. However, no one is keeping her there. When her brother un-defers her from school, their father is happy she’s going because she’s miserable, and it shows up in her work. Karen takes offense to that and goes into a whole cruel tirade that feels unearned. She tells her father that their mother was dying there long before she got cancer and breaks the framed lotto ticket that belonged to her mother and scratches it.

Karen runs off with her drug dealer boyfriend and gets high. Kevin lights fire to the boyfriend’s trailer, and Karen pulls out a gun in defense of her brother. She would kill Todd for Kevin, but doesn’t have to, thankfully. They drive off, and because the two of them are fighting, Karen accidentally crashes the car, and it turns over, killing her brother. The sheriff, a sexist regular at the diner, excluded the fact that Karen was driving in the report because the family has suffered enough. Karen’s father says he doesn’t want her there, and quite frankly, I would want her there, either.

What I find exhausting about Karen’s backstory is that it’s supposed to be the reason she says later that she can’t be redeemed for her bother’s death. And I’m just sitting here as a person who has just binged watched the series saying (a) it was an accident, (b) even if he had lived he absolutely would have gone to jail for arson ,and (c) you know what would give you a chance to earn redemption? Going to jail for vehicular manslaughter.

This season of Daredevil highlighted how bad it is at writing woman. I mean, the show literally put a woman in the refrigerator as motivation for a man, and I’m laughing and crying at the same time. Every woman is a morality pet or crutch with their identity wrapped up in the men in their life. Even the best case example of this, Vanessa, is still really just window dressing for Fisk’s own twisted morality.

Karen’s drug dealing past is an homage to her comic counterpart, where in true Frank Miller fashion, she was a “fallen woman” with a severe drug addiction that led to her getting HIV and revealing the identity of Daredevil for a fix. I’m 100% glad that is not the case here, but at the same time, her backstory just seems sort of unsatisfying considering how “dark” is was said to be. I mean, it’s very sad, but when you consider we have two antagonists who have killed people, and a protagonist who lost his parent in a brutal way and was abandoned by his mother, Karen’s backstory is just below Trish’s (in Jessica Jones) in terms of supporting characters. Foggy is the only ordinary one.

I wanted Karen’s backstory to really be interesting and raw, as a lot of “going back home” backstory narratives can be, but considering we got one of the best ones on BoJack Horseman this season with Princess Caroline, I find myself really frustrated by how the Netflix MCU continues to treat women. Karen’s angst is only sold by the damn impressive work of baby vampire Deborah Ann Woll.

Is this what Ben died for? I’m glad she’s alive, and I’m glad the show wants to make her morally grey, but this isn’t that morally grey. It was an accident, and the biggest issue I have with it is that she should have gone to jail.

Overall, I really enjoyed this season of Daredevil, with the exception of Karen and Dex (because he was talented but wow so much man pain), and I hope that if this series does continue, separate from the possible Heroes for Hire series, that they do better for their female characters. I love Karen when she stands up to Fisk and when she calls out Matt on his bullshit, but she also gets people killed a lot through just been too gung ho at times.

She never seems to grow from that, and considering that her backstory basically says that Karen has never had to deal with the ramifications of her actions, accidents or not, is it any shock that she still does really silly things for the sake of the “greater good”?

What did you guys think of Karen’s backstory? Did you find it compelling? Let us know below.