Kamala Khan Is the Superhero We Need—Now, More Than Ever | The Mary Sue

Kamala Khan Is the Superhero We Need—Now, More Than Ever 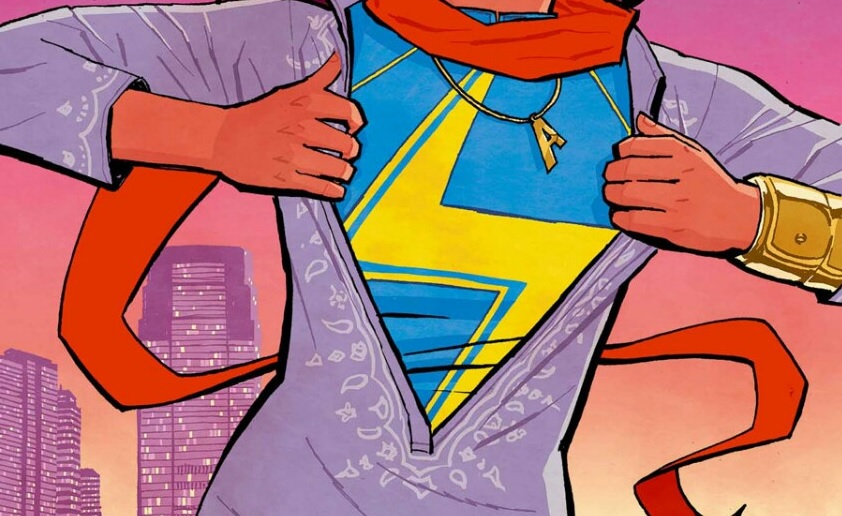 In the wake of Donald Trump’s election, many of us in marginalized groups are feeling everything from fear to confusion to a heightened sensitivity to our lack of representation in pop culture media. I am an immigrant to the United States, smack dab in the middle of the process of becoming a citizen (one which, sidebar is lengthy and expensive). With a swell of anti-immigrant rhetoric, our positive representation matters now more than ever.

There aren’t a lot of immigrant characters in comic books—my medium of choice—and someone reading this is screaming, “Superman!” at their computer right now. He’s a pretty good offering, to be sure, but as a woman, I would like to look to someone who more accurately represents my experiences out in the world. That same reader is likely now yelling, “Supergirl!” and yes—for me, Supergirl really works as a character who’s representative of my experiences. But I’m a Caucasian, English-as-my-first-language lady from the suburbs. As far as immigrants go, I land in a privileged category that many other people do not. I enjoy a certain level of trust that is not always extended to other people in my situation.

On the rise with anti-immigrant rhetoric is a swath of Islamophobia. This trend, although troubling, is not a new one. With these two positions being lauded by an incoming government as acceptable ideologies I would like to posit that Kamala “Ms. Marvel” Khan is the superhero that we need—now more than ever.

Brushing aside the fact that, adorably, Kamala is as big an Avengers fangirl as any of us, she so perfectly embodies the modern idea of an American. Kamala is the daughter of Pakistani Muslim immigrants living and practicing in Jersey City. Horribly, regardless of the fact that Kamala was born in the United States and I was not, I can skate through life with more privilege than her due my color of my skin; even after being legally accepted as United States citizens, people like the Khans must continually prove they deserve to exist in this country.

Maybe Muslim characters in particular are scary for the Big Two comic book companies to consider actively integrating into their roster (besides Kamala there is Sooraya Qadir, an X-Men known as Dust, who is currently nowhere to be found over at Marvel), but proof of Ms. Marvel’s resonance as an American superhero can be seen across the country at a comic book convention near you! I have personally seen people of every ethnicity (off the top of my head: South Asian, East Asian, Caucasian, African American, Latina and Native American) cosplaying variations on Kamala Khan’s Ms Marvel costume—and that totally rad outfit that she wears on her very first issue cover. Not only that, I have also seen men dressed up as Kamala Khan (which I guess makes them “Kamal Khan”?). Given the fact that Kamala has only existed since February 2014, that is a pretty significant reach and resonance to have across a country of diverse and unique people.

Everyone can get behind the idea of working for the greater good and channeling your own unique abilities to make the world a better place—but sadly, we don’t all get to embiggen; some of us just have Twitter. Kamala Khan, in and out of her superhero uniform, embodies the greatest qualities of an American (and those of us just living and working here, striving to become Americans). This is what today’s America needs to be reminded of.

As a culture (even if you only want to think of yourself as a part of “geek culture”), we need Kamala Khan more than ever. During an incident of graphic Islamophobic graffiti in San Francisco, activists protested by painting Ms Marvel over top of the hate speech. It is our responsibility to unite ourselves behind a figure like Kamala Khan as members of her real world super-team.

People are even now looking to remove immigrants from our homes, our families and our careers. But we are a country of immigrants, and it is not only past time that this fact was owned up to, but celebrated. We can start by elevating immigrant characters, their families and their stories in popular culture. This may seem like an oversimplification, but popular culture informs people’s views of the world and can bleed into other aspects of our lives: discussion, activism, policy.

I would encourage anyone reading this who is not familiar with Kamala Khan to get your hands on a copy of Ms. Marvel Vol. 1: No Normal. Don’t just look at Kamala as friend—rather, embrace her as a representation of yourself and the world around you. If you can bring this accepting mindset to the forefront of your daily life, you are going to be helping to make the world a better place than the current President-elect is going to manage to over the next four years.

Trust an immigrant on this one.

Ashley Victoria Robinson is a Canadian actor/writer. She is the co-creator and star of The Red Shirt Diaries and can be seen on your TV in a couple different commercials. She hosts review shows for Jawiin (Girl on Supergirl, Game of Thrones Review Show) and Collider Video (see her on Collider Heroes and the Movie Trivia Schmoedown). In collaboration with Jason Inman, Ashley co-hosts the Geek History Lesson Podcast with new episodes every Tuesday. Ashley is also the winner of the Top Cow Talent Hunt 2013 and has had several comics works published through them.