We Can’t Wait to Visit Carnival Row | The Mary Sue 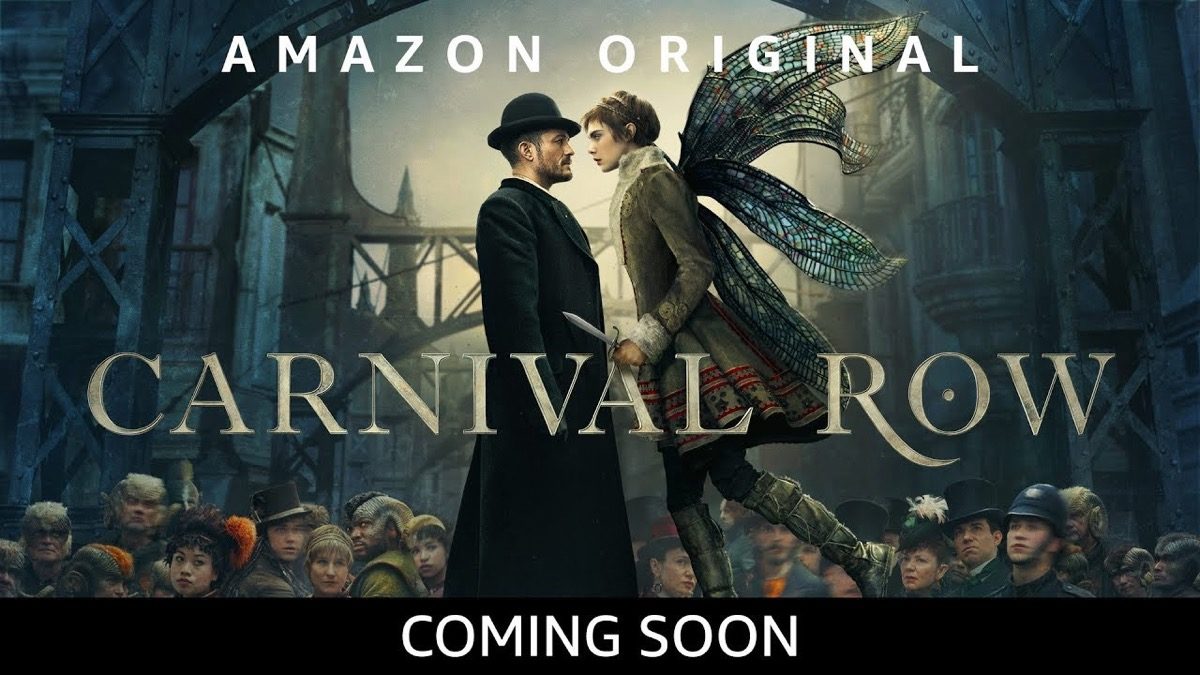 Last month at San Diego Comic-Con, Amazon pulled out all the stops with a huge off-site showcase of its finest offerings, including The Expanse and The Boys, but the highlight of the experience by far was the chance to step into the world of Carnival Row. From the first step, attendees were sorted into human and creatures, and as we walked through market stalls and a secret fae saloon, “creatures” were subject to raids and suspicion.

The social commentary of that segregation and persecution was on full, proud display. The new series promises both fairies and pointed social critique, and we’re certainly curious. Carnival Row is set in an alternate Victorian London where fairies and fauns aren’t just real, but a terrible war between worlds has rendered the fae refugees among the mortals. The latest trailer emphasizes the relationship between fairy Vingette Stonemoss (Cara Delevingne) and human Rycroft Philostrate (Orlando Bloom), as well as hinting at some of the central mysteries of the series, but it’s the pointed political allegory of it all that’s got us most interested.

Carnival Row sees fairies, pucks, and other creatures relegated to a neighborhood of London where we find the titular Carnival Row, and they are subject to prejudice, abuse, and exploitation. If that sounds extremely familiar, given our current immigration battles in America, it’s meant to be. Speaking to press at Comic-Con, the actors and creators confirmed that the show is meant to tackle some of the most pressing issues of the day. “I think the thing that art has a chance to do is get people to look at issues and discuss those issues,” said super-producer and co-creator of the show Mark Guggenheim.

The nice thing about art is it can hopefully jump start those conversations,” he added.

Orlando Bloom, taking his first turn at the small screen with this role, agreed. “It was the great gift and opportunity of stepping into this show, because it was so timely and it did feel that it spoke to a lot of the issues with relevance to what’s happening in the world today,” Bloom shared. He also noted that, because of the fantastical setting, they’re “able to examine with real humanity some the really tragic and desperate situations that are happening in the world, but with an objective and an empathetic view.”

The word that resonates with co-creator Travis Beacham for what they’re attempting is “Dickensian,” and not just in the Victorian setting, but in the way that both Dickens and Carnival Row are about “wrestling with issues of the time, in a way that’s very personal,” Beacham explained. “It’s Dickensian in its scope in that we’re trying to see as many different subsections of the population as possible, because I think, fundamentally, the show is about how those all intersect and how the actions of one group affect another group.”

Beacham added that, in terms of diversity of stories, it’s something important to them. “It will only get more diverse as we go on,” said Beacham. “We try to make it as messy as possible because that’s where the drama comes from.”

And we will see a vast array of groups and perspectives, the producers assure us. “The show is about racism but also feminism and classism and every ism there is,” says Guggenheim. “We’re really looking at the society from a different lens and all the ways you can fracture a society. My hope is that show really does feel incredibly diverse.” That will include not just racial diversity and immigration allegories, but diversity of religion and sexual orientation.

Guggenheim explained, “You’ll see among the fairies themselves, the nature of sexuality is different from human sexuality, and we deal with that.” With Delevingne (recently engaged to her girlfriend), this also means we could see another LGBT actor in a queer role, which is always a welcome treat.

Honestly, I’d be happy to see any number of the excellent cast lined up for Carnival Row doing anything onscreen. Beyond Delevingne and Bloom, the cast also boasts David Gyasi (Cloud Atlas), Tamzin Merchant (The Tudors), Jared Harris (Mad Men, Chernobyl), and Indira Varma (Rome, Game of Thrones). Of the extensive cast, however, it’s Bloom that’s particularly fascinating as he takes on his first television role.

While Bloom is no stranger to massive, intricate productions, he was very impressed by the detail that went into the Carnival Row production and the depths he could discover in a longer story. “Getting to explore for eight hours and go deep,” Bloom explained, “is an exciting new way to tell the story … just so fun to get to go so deep into character.” With the emphasis from the producers and actors that the important aspect of the show is not just the topical story, but how it impacts all the characters, it will be very interesting to see what Bloom and his castmates get to do.

Carnival Row will premiere its entire first season on Amazon Prime Video on August 30, just in time for a Labor Day weekend binge.