Wayward Sisters Fans Aren’t Giving Up on the Supernatural Spinoff 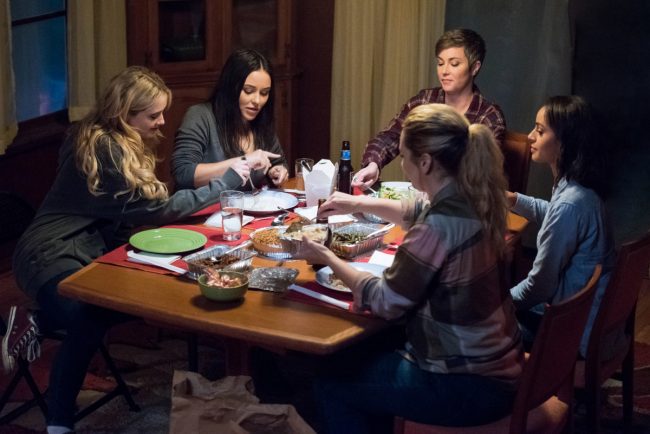 Last Friday, news broke that The CW had passed on giving a series order to the Supernatural spinoff Wayward Sisters. It was a decision that shocked fans and journalists alike, since a Wayward pickup had seemed almost certain. Wayward Sisters is an idea that has been around in the Supernatural fandom for three years, ever since Claire Novak (Kathryn Newton) was sent to join fellow lost soul Alex Jones (Katherine Ramdeen) in the care of Jody Mills (Kim Rhodes) in episode twenty of season ten. The “Wayward Daughters” campaign began soon after and gained more and more steam, gaining the attention of the actors, then writers, and finally getting network approval for a backdoor pilot that aired in January. The pilot received good ratings, excellent buzz, and was a social media knockout, and yet on Friday, The CW decided that it would not be taking the show to series.

The Supernatural fandom, of course, did not agree with that decision. After a few minutes of grief and anger, fans got to work. They sent complaints to The CW—so many, in fact, that an automatic form response was generated. They called, they tweeted, and most impressively, they started a change.org petition that, as of this writing, has over 49,000 signatures. These wayward sons and daughters were not going down without a fight. The Wayward Daughters campaign Twitter account also launched a specific plan of action, urging fans to continue to tweet, write in, and use the #SaveWaywardSisters hashtag until Thursday, when two things happen: the Supernatural season finale, and more importantly, The CW’s “upfront” presentation to advertisers in New York, where they will officially roll out their fall schedule. Fans hope there is still time to change minds, specifically the mind of CW president Mark Pedowitz. And that’s not entirely crazy.

A Wayward pickup makes sense for The CW, which is why the pass was so shocking. Supernatural is the longest running program on the network, and is still its second-highest rated. Its fanbase is powerful and vocal, and while the overall audience of the show is pretty evenly split demographically, the fandom is predominantly female. This is why Wayward Sisters struck such a chord. In addition to Claire, Alex, and Jody, the show would include sheriff Donna Hanscum (Briana Buckmaster), psychic Patience Turner (Clark Backo), and dreamwalker Kaia Nieves (Yadira Guevara Prip). A show with six female leads, of all ages, shapes, colors, and sexual orientations is an amazing prospect and so sorely needed. We know The CW isn’t afraid of reboots or female-led shows (hi, Roswell New Mexico and new Charmed), and any network would kill for so much advance buzz. In fact, Wayward Sisters has received more press for not getting picked up than any other CW pickup. So what was the problem?

According to some reports, things came down to Wayward versus a show called Legacies. Now, if you’ve never heard of this show, you’re not alone. Like Wayward Sisters, Legacies is a spinoff, too—actually a spinoff of a spinoff, since it follows someone from The Originals. The thing is, Legacies doesn’t have a pilot; it was sent to series on the strength of a script alone. Deadline reports that “The CW brass also were encouraged by the solid ratings for the current final season of The Originals.” However, The Originals final season has averaged only a .36 in the demo, whereas Supernatural is at a .56, with double the overall audience. It’s hard to understand why a network would pass on a show with better ratings, and with huge built-in recognition, in favor of a copy of a copy with no buzz. Wayward had the strongest buzz of any CW pilot, in fact. You’ve probably heard of Wayward Sisters and Supernatural, but have you heard of In The Dark? I didn’t think so.

The pass on Wayward Sisters was perhaps most heartbreaking because of the love, blood, sweat, and tears that the cast and crew have put into the idea over the years. The Wayward Women, through Stands, have raised over $100,000 for charity. They have created a movement encouraging people of all genders, ages, sexualities, races, and sizes to embrace what makes them unique and be “wayward AF.” Kim Rhodes and Briana Buckmaster have become huge draws at Supernatural conventions all year round, and icons to their fans. Writers Andrew Dabb and Robert Berens have worked on this idea for years, hoping to give the fans what they asked for, and what they needed. In a female fandom of a show that hasn’t had a great track record with women (but it’s getting better), Wayward Sisters meant so much. In a nation where women are finding their power and standing up against violence, abuse, and inequality, Wayward was a rallying point. It was something more than a television show, and perhaps that’s why Wayward Sisters won’t go quietly into the night.

It’s been a rough week in television, with cancelations for many fan favorites, like Lucifer getting the axe. But it’s also a time of miracles. Brooklyn Nine-Nine was saved by NBC, who had a chance to undo the mistake they made in passing on the show years ago. Supernatural fans are hoping that The CW won’t have to live with that regret, that all the attention and noise will make the network realize what we know is true: This unique and important show deserves a chance—at least the same chance as a third Vampire Diaries show without a cast or a pilot. And if this (terrible) decision sticks? Well … the Wayward movement isn’t through. A TV network cannot unteach the lessons these characters and actresses have taught us. It cannot take away the strength in women and girls they have inspired. In a moving post, Kim Rhodes shared this sentiment: “Even if it doesn’t turn out like we think we want it to, we aren’t done. There are many more tricks up our sleeves than stars in the heavens, m’loves. We know who we are now, and you can’t unlearn something like that.”

Supernatural has brought literally every character on the show back from the dead. We resurrect with Wayward Sisters, too. Refusing to die because we’ve got a world to save isn’t just Winchester. It’s Wayward. (AF).