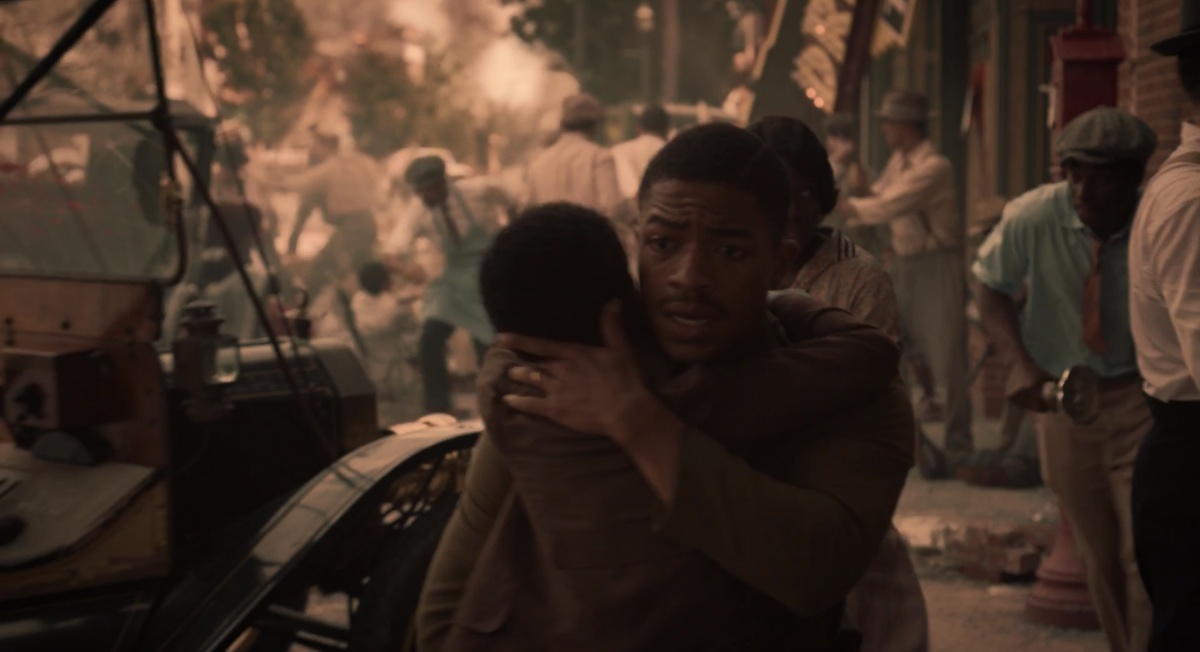 HBO’s Watchmen started off with a bang last night, giving people not just an hour of great acting, but also a much-needed history lesson about Black Wall Street and the Tulsa Race Riot.

The episode begins with a silent movie being watched by a young African-American boy. We slowly see it pan out and realize that his mother is there, too, and outside, there’s banging and explosions. A Black man enters with a gun, hands it to his wife, and they all leave together. Through this young boy’s eyes, we bear witness to the racial violence that happened in Tulsa, Oklahoma’s Greenwood district in 1921.

Greenwood was known as “Black Wall Street”/”Negro Wall Street” because it held, at that time, the wealthiest Black community in the United States. The area ended up becoming a Black mecca for multiple reasons. The territory of Northern Oklahoma had been set aside by the government for the “resettlement” of Native Americans from the Southeast after the Trail of Tears. Some of the Five Civilized Tribes owned slaves and brought them along. Therefore, they were also given land, and when slavery ended, those tribe members were freed, as well. Additionally, there were settlers from the South, and those who began moving to Oklahoma for the land rushes 1889- 1891.

Black people there had created their own businesses and newspapers, as well as two movie theaters (one of which you saw in the episode), nightclubs, and numerous churches. The area was filled with Black professionals and WWI veterans who were motivated to better themselves after helping serve the country. Booker T. Washington saw Greenwood as an example of Black economic independence and excellence, and encouraged other Black people to come there. It was the Black promised land. Residents voted in their own leaders and had enough economic power to enjoy the prosperity of the oil boom.

Everything changed over Memorial Day weekend in 1921. A 19-year-old Black shoeshiner named Dick Rowland was accused of assaulting a 17-year-old white elevator operator named Sarah Page. Rowland was taken into custody, and a lynch mob began to form around the courthouse where the teenager was being held. Accounts claim that Rowland never assaulted Page, and that he probably either brushed up against her or moved to close to her for her liking, and she screamed in response.

Rumors began to circulate that he had been lynched, and the Black population and white populations were both armed and in close proximity. Shots were fired, and initially, twelve people were killed, ten of them white and two black. Once it became known that armed Black people may have caused the death of whites, mob violence began. Thousands of white citizens rioted through the neighborhood that night and the next day, killing men and women, burning and looting stores and homes. Even middle-class white families who employed Black people in their homes were harassed by white rioters, demanding they turn over their employees. Anyone who refused was attacked and vandalized, which means most threw their Black employees to the dogs.

In the end, after street mobs, air mobs, and the national guard coming in, what was once the promised land was a sea of fire that left around 10,000 Black people homeless, and property damage amounted to more than $1.5 million in real estate and $750,000 in personal property ($32 million in 2019), according to the 2001 Report by the Oklahoma Commission to Study the Tulsa Race Riot of 1921. According to that study,  “The Red Cross reported that 1,256 houses burned, that 215 houses were looted and not burned, and the total number of building not burned but looted and robbed was 314. ”

The commission estimated that between 100 to 300 were killed in the rioting. The Tulsa race riot is considered one of the worst incidents of racial violence in American history.

Death in a Promised Land: The Tulsa Race Riot of 1921 by Scott Ellsworth