SMILF Is an Amazing Show With a Bad Title 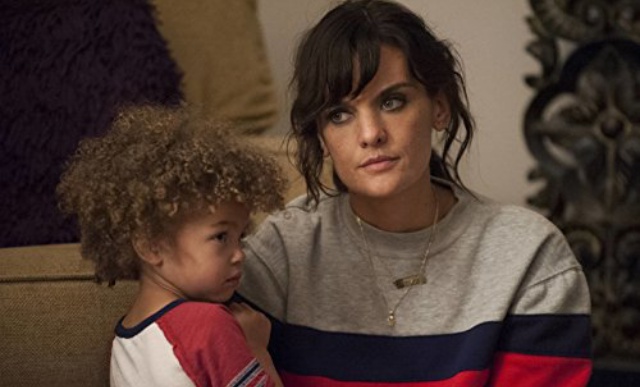 When I first started seeing the television posters for the Showtime show SMILF, I just kept thinking that it was a super unfortunate title for a show, but as they say, don’t judge a show by its clickbait title.

SMILF is based on a short film by its lead actress Frankie Shaw, who is wearing many hats in this show. Not only is she the creator and the lead, but she directed three of the episodes thus far and has written (and co-written) four of them. Both of the other directors are queer women: Amy York Rubin and Leslye Headland. The writers are also mostly women, with two exceptions, so if you are looking for a show that is promoting women both on-screen and behind the scenes then SMILF is delivering. (Psst, just hire more WOC next season please thanx).

As the title indicates, this show is about a young single mother named Bridgette Bird who is raising her adorable bi-racial little boy, Larry Bird. (Yep, she did that on purpose). Bridgette is young and emotionally stunted from growing up with a bipolar mother, TuTu, who is played to perfection by Rosie O’Donnell. TuTu, while loving, had her own mental health issues to deal with, and that meant there were times when she couldn’t be there for her daughter.

What I really appreciate about the show is how it shows that motherhood is hard, whether you are a single mother or you have a husband/partner to help out. Bridgette loves her son, but she also has her own emotional needs and can get bored of being a mom, because no one wants to push someone else on a swing all day. Yet, you feel all the love she feels for her son, whether those expressions of love are comical, like cutting her hair with a piece of glass to climb a barbed-wire fence to get to Larry, or serious, like being freaked out about accidentally giving him emotional trauma by taking him to an R-rated movie.

Plus, SMILF is filled with some surprisingly positive female friendships. There is Bridgette and Eliza, who is played by the wonderful Raven Goodwin. I really enjoyed watching Goodwin on Being Mary Jane, so I’m glad she is out there getting her money in a role that lets her be funny and sexy. Eliza is the more financially secure, both from her father’s money and her own sex-cam business. Sex work is always hard to get right on television, but what I love about Eliza’s is that it is very much framed as her choice and as something that makes her feel sexy while she gets paid. Her relationship with Bridgette is really sweet and supportive, but they give Eliza her own family (her sister lives with her and their father visits). Eliza isn’t just a token black friend; she is an integrated part of the story.

What also surprised me is that Bridgette is also really good friends with her baby daddy’s new girlfriend, Nelson. At first, it seemed like it was going turn into a cliché rivalry. And while there are some organic, moments of jealousy, it is overall a supportive friendship between two women who are now part of each other’s lives for the foreseeable future. In addition, although Bridgette has been portrayed so far as loving men, she does seem to have some attraction to women, and that comes out the most around Nelson.

As I’ve mentioned before, TuTu played by Rosie O’Donnell is amazing in this show, even if her Boston accent is a little dated. She gets to have episodes that deal with her own mental health issues, and her beautiful storyline reminds us that Rosie can do quiet acting just as great as she can do loud.

Sex is probably the most comedic element in SMILF. It is often portrayed as messy and awkward, and Bridgette’s own bodily insecurities makes her compensate with dirty talk. Not to mention she is very lax about safe sex, which is actually kind of refreshing to see it addressed and not just treated with a hand wave. Will it have consequences? Probably not, but still I’m glad when shows aren’t afraid to talk about the fact that sex can mean different things to different people. For Bridge, it’s about self-esteem and trying to convince herself that she is a sexy person. That’s why the first episode deals with her wondering if her vagina is “blown out” from childbirth.

Rafi, the baby daddy, also has his own storyline of dealing with addiction and relapse, a topic which is handled with the right amount of care and weight. It also highlights the difference in class between his relationship with Bridge and his relationship with Nelson. They are both white women, but Bridge grew up working-class; she’s seen addiction, and she knows that Rafi isn’t just gonna wake up and get better. Nelson wants to believe that it’s that simple, which shows both her positivity and her ignorance.

SMILF is a silly show I’m very glad I watched, and I wish it was getting more coverage. While it has been nominated for two Golden Globes and has gotten renewed, I don’t see it discussed a lot. Both it and Shameless are doing some really interesting thing with race, class, and gender. While it may not always hit, it at least tries to talk about mental health and poverty in the nitty gritty, harsh realities of those truths, rather than having everyone end up okay in the end. It also doesn’t mind having the female characters be messy humans. And Bridgette is a very messy human.

If you haven’t checked out SMILF, give it a shot. You won’t be sorry you did.