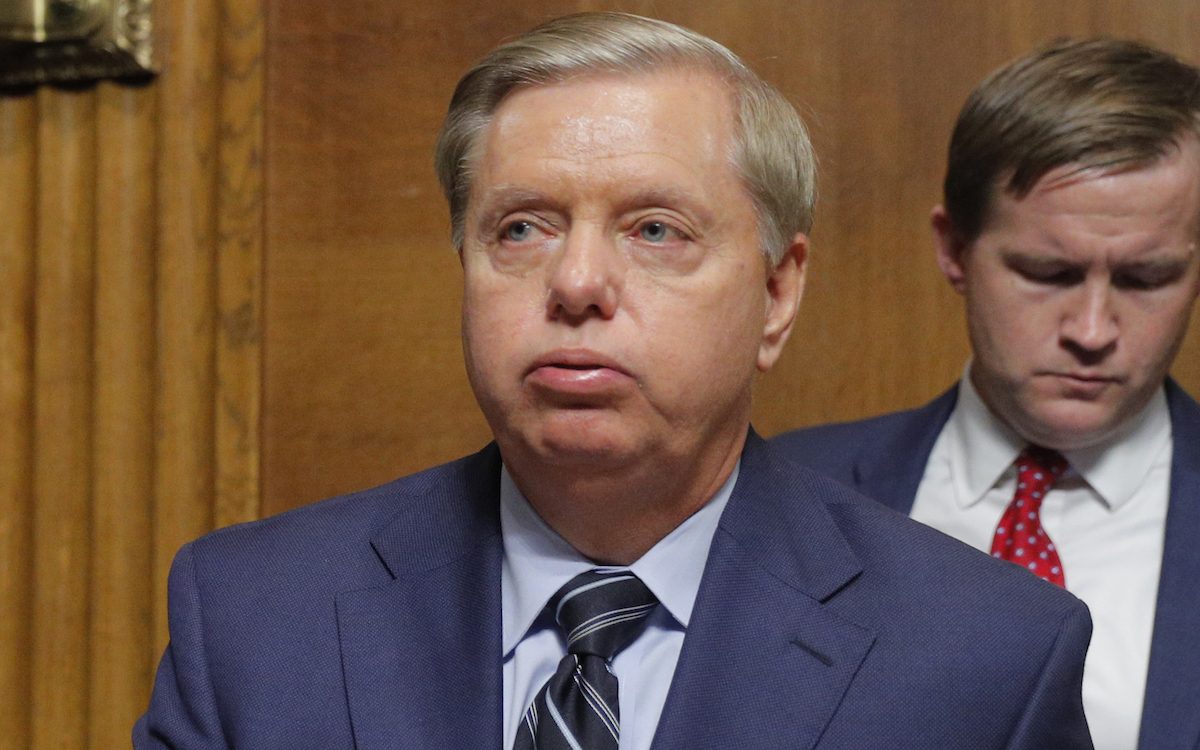 We all know that Lindsey Graham, sentient toadstool and Senator who once said if the Republican party nominated Trump they would get destroyed and they would deserve it, continues to prove his utter lack of integrity and accountability as the impeachment inquiry continues. This time he was personally confronted by a veteran in the halls of the senate who asked him to uphold his oath and Graham just … ran away.

Watch Lindsey Graham run away from a Marine Corps Iraq Vet who respectfully tried to talk to him about Trump being in violation of the Constitution. Graham is a coward. Let’s make this viral. @NoOneIsAboveLaw #VetsForImpeachment

Really, Lindsey? Really? Up until this veteran questions him, he’s civil, respectful, and grateful for his service; but the moment he brings up that whole “the president is violating the law and the constitution” issue Graham, as the kids say, yeets right out of there. No wonder he looks so slouchy in the video: it’s hard to stand up straight with no spine.

It says a lot about this guy that he won’t even engage with someone asking him to, you know, do his job as a US senator who has sworn to uphold the constitution, but I guess we shouldn’t expect anything from a guy who is using his social media not to call out the President’s corruption and abuse of power, but to parrot Trump’s bogus claims about Hunter Biden:

Today, I sent a letter to Secretary of State Mike Pompeo requesting documents related to contacts between:

It’s just sad to see a guy who once attempted to stand up to Donald all those years ago in the primary abandon any semblance of integrity to replicate the attacks on the Bidens that Trump is in hot water for. He’s trying to defend the President against the growing weight of the evidence that Trump abused his power by attempting to extort Ukraine into looking into those same, made up smears.

Who did the president “Bribe” and what did he get for it? Be specific.

The truth is that “Bribery” is a made-up, poll tested charge without any factual basis in this case.

Ugh. This isn’t new, of course. Senator Graham has long been against any progress for the good of America, but right now things are different. Trump, a guy who bullied and mocked Graham is making a mockery of the constitution, and Graham in the process, by forcing him to defend an indefensible President.

There is however some good news, or at least a glimmer of hope, because Lindsey Graham, like Mitch McConnell and Susan Collins, is up for reelection in 2020. His opponent, Democrat Jaime Harrison, is already working and calling out Graham’s cowardice.

This Iraq War veteran is calmly and civilly trying to have a conversation with Senator Graham.

Graham *literally* turns his back on him and runs away.

This is not what public service looks like. https://t.co/58nBVe6Udq

Harrison has a very hard road ahead to beat Graham in conservative South Carolina, but maybe the people of the state will begin to change their mind as their Senator continues to prop a corrupt President. One can only hope, since Graham doesn’t seem ready to defend himself.