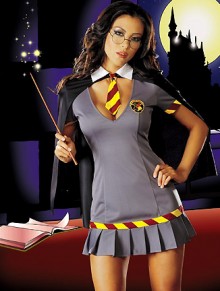 With the Harry Potter movies soon coming to an end, Warner Bros. needs to find new ways to milk the franchise for money, and that might very well be all things Quidditch. The Hollywood Reporter points out that Warner Bros. has been trademarking just about everything under the sun in regards to Quidditch over the years. However, neatly tucked away in the paragraphs and paragraphs of trademarked Quidditch items, lies one simple crazy word: Lingerie.

Warner Bros. probably included lingerie in the trademark barrage simply to prevent someone else from capitalizing on the (obviously amazing) idea, preventing the sporty lingerie from possibly happening one day. Or, less likely, Warner Bros. found a whole new way to, *ahem*, milk the franchise. (Ed. Note: Gross.)

Either way, Warner Bros. has trademarked Quidditch lingerie. For when you want to be sexy while playing imaginary magical flying sports.

(The Hollywood Reporter via Blastr)