Warner Bros Is Working On A Supergirl TV Show And I Have A Lot Of Feelings About It, Ok?

This is not a costume. These are my clothes. 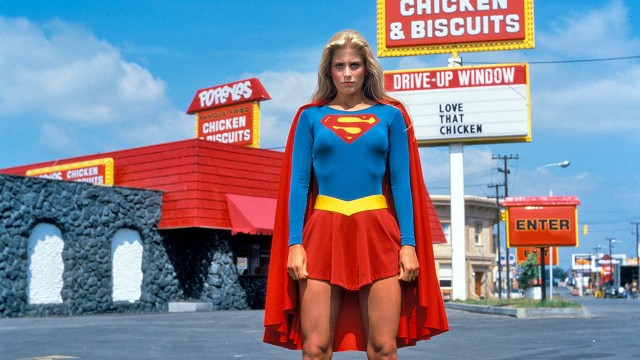 I heard a rumor. I wasn’t sure if I wanted to believe it or not. But I checked with some people and my sources say it’s happening – a Supergirl TV show.

The Hollywood Reporter also confirmed it this evening saying no network is being looked at specifically but Greg Berlanti and Ali Adler are trying to adapt DC Comics’ Supergirl into a television series.

Adler, who worked with Berlanti on ABC’s superhero dramedy No Ordinary Family, will pen is expected to pen the script, with Berlanti on board to produce via his WBTV-based Berlanti Productions banner. DC’s Geoff Johns is also expected to have a role in the Supergirl project, which is in the early stages of development and expected to be taken out to networks soon. Johns exec produces Arrow and The Flash.

Considering the many incarnations Supergirl has taken in the comics, animation, and film world, who knows what this new one would be but THR writes “Adler and Berlanti’s take is expected to be a new interpretation of the character and her story.” Which, WHY? But really, I have feelings. 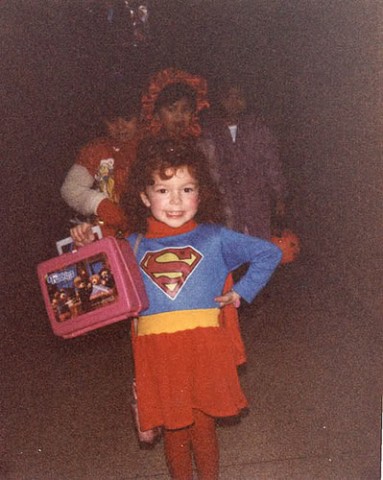 Yeah. That’s me. In kindergarten. On Halloween. But that’s not a costume. Those were pajamas. And I wore them ALL THE TIME. So my first reaction upon hearing the news was…jubilant to say the least. My second thought? NO, DAMN YOU, GIVE HER A MOVIE!

Whenever the topic of superheroines in film comes up, everyone points to the failures of Catwoman and Elektra who are, to me, more anti-heroes but that’s just splitting hairs. Supergirl is the only true female superhero to have her own film. Supergirl was released in 1984, distributed by TriStar Pictures (Warner later bought the rights), and was meant as a tie-in to Christopher Reeve’s Superman film series. It starred Helen Slater who later went on to play Superman’s birth mother, Lara-El on Smallville and acted alongside our second live-action Supergirl, Laura Vandervoort. I got to speak with Slater back in 2009 and she remains one of my idols to this day. Nothing will ever replace having her to look up to as a little girl surrounded by superheroes who didn’t look like her. She made me feel like my own superhero.

While a television version of the character could have a similar impact on so many, I’m wary of the project as a whole. It’s hard to forget David E. Kelley’s attempt at a Wonder Woman series or The CW origin story Amazon which never even made it to filming.

But my biggest point is this – Supergirl deserves to be on the big screen and a new generation deserves to watch her. Can you just imagine the demographic that would swarm the theaters if you cast someone like Jennifer Lawrence as Supergirl? And what that could potentially mean for other superhero adaptations and the comic industry itself?

Let’s not forget, DC Comics published a Man of Steel prequel comic which featured Kal-El’s cousin, Kara Zor-El. It was available at Wal-Mart and written by Geoff Johns and Sterling Gates with art by Jerry Ordway. It afforded Warner Bros. the perfect opportunity to bring her into the sequel film and then spin her off into a solo outing but of course they didn’t go that route and come March 2016 we’ll be getting Batman v Superman: Dawn of Justice instead.

This isn’t to say Supergirl couldn’t wind up in the film universe as well as on TV but all those involved in Warners’ adaptations have spoken to keeping the two separate entities. Am I excited they’re moving forward with a Supergirl project? Absolutely. I’ll be watching it every step of the way. With my super-vision.