#NotMyGodEmperor: Why Are There So Many Actual Fascists in the Warhammer 40K Fandom? 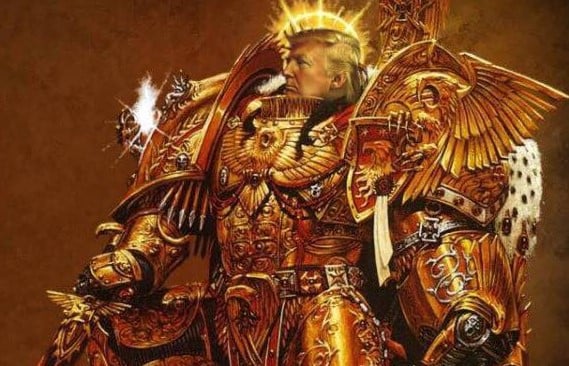 It all started when I saw a picture of Trump photoshopped to be the God-Emperor of Mankind.

It was last December, when Trump’s campaign was swinging into high gear. I was a young innocent oh those many months ago, but that picture caused a twinge in me. It was a little like enjoying Liar’s Poker (which I do) and then finding out that some Wall Street creeps used it as a guide (which they did). It annoys me when people I dislike share an appreciation for something I like, but I brushed it off.

But I kept seeing that picture, and similar images, popping up all over the internet. And then after I wrote a particularly divisive article for TMS back in January, I started getting exposed to the less friendly elements of Warhammer 40k’s fanbase and it started to get stuck in my brain. And then I remembered how, back when GamerGate was still a thing that people took seriously, how they would often use repurposed images from Warhammer 40k as propaganda. And some dots started connecting in the back of my brain.

That’s ridiculous, I told myself. There’s absolutely no way they could be genuinely identifying with the Imperium of Man or its fascist power structure. After all, the Imperium of Man is a parody of fascism, and not a particularly subtle one at that, since the game constantly talks about how much life sucks and how the authoritarianism causes more problems than it solves. They’d have to be blind to not see that Warhammer 40k is… kid…ding.

Let’s stop for a moment and talk about satire, because I like hard shifts like that. The problem with satire (or, more directly, the problem with writing satire) is that it has a goal, beyond simply being funny. Satire is pointed, it has a purpose, it is, to use a phrase I often dislike, saying something. More specifically, satire is saying something by taking something it wishes to criticize and blowing it up to absurd proportions.

And therein lies the problem: Satire is always walking the razor’s edge. By using the words and concepts of the thing you are satirizing, you are often giving voice to those words and concepts, and someone out there is going to agree with those words, not the actual point of your satire. That’s the basis of Poe’s Law: Without a blatant display of comedy, it is impossible to create a parody of extremism or fundamentalism that someone won’t mistake for the real thing.

This is a rabbit hole all its own that I could literally spend hours talking about, but that would be counterproductive. Dan Olson has a great video on this (and how it relates to The Simpsons, specifically) and another on how claiming something is satire has become an automatic response when something you do or say gets criticized, but even that is merely scratching the surface of how satire and culture interact. I just need you to have a working understanding of satire.

So, that brings us back around to 40k. The humans of Warhammer 40k (those of them who haven’t fallen to the heretical Chaos) live in a fascist political system. The government has unrestricted power, the citizens next to no rights, military service is near-universal and compulsory, and multiple branches of government and military have no accountability. The state-sponsored religion is mandatory and repressive, and the government is built around xenophobia both figuratively and literally (hatred of any human outside accepted norms is written into state policy, as is hatred of aliens).

On any level, the Warhammer universe is not the sort of place you’d want to live. It has been repeatedly established within canon that life for the average citizen is, to put it nicely, absolute garbage. The system is inefficient to an almost comical degree, with starvation rampant and planets occasionally left abandoned to their horrifying fates because no one was aware they were in trouble. The unrestrained military spends most of its time squabbling with other elements of the military, often to the point of violence. It functions better as a dark parody of fascism than any sort of endorsement of it. Which begs the question: Why would the actual fascists of /pol/ gravitate towards it?

First is the problem that all satire will eventually run into—that Poe’s Law issue. In order to properly approach satire, you have to be very much aware of how much it’s kidding, and therein lies the issue: I don’t think even Warhammer 40k knows how much Warhammer 40k is kidding. The setting is absurd yes (I mean, the Primarch of the Raven Guard is literally named Corvus Corax, that’s a thing, and yes, that’s still one of my favorite Chapters) but it occasionally seems to take itself very seriously.

The setting used to be more overtly comedic, with characters like Obiwan Sherlock Clousseau running around (no really, that’s a real character), but the more obviously comedic elements have been increasingly downplayed in recent years, which just leaves the dark things it was satirizing to consume the setting. There’s a reason why “grimdark,” the widely accepted internet term for something be absurdly (and unnecessarily) gritty, takes its name from the Warhammer 40k tagline. Without the element of dark parody in the universe, all that’s left is the “Grim Darkness of the Far Future.”

But there has to be more than that. Even without the comedic aspects, the setting still brutally mocks fascism simply by showing the results of authoritarianism as being destructive. The more heroic characters and factions are universally those who buck the trend of being repressive fascists, from Space Marine Chapters like the Ultramarines and Salamanders to Black Library figures like Ciaphias Cane, HERO OF THE IMPERIUM! Anyone lending even the smallest amount of critical thinking to Warhammer 40k would have to figure out they’re kidding.

Ah. Critical thinking. That might be the issue. So let’s talk about the other /pol/ raid that often used images from Warhammer 40k as propaganda: GamerGate. 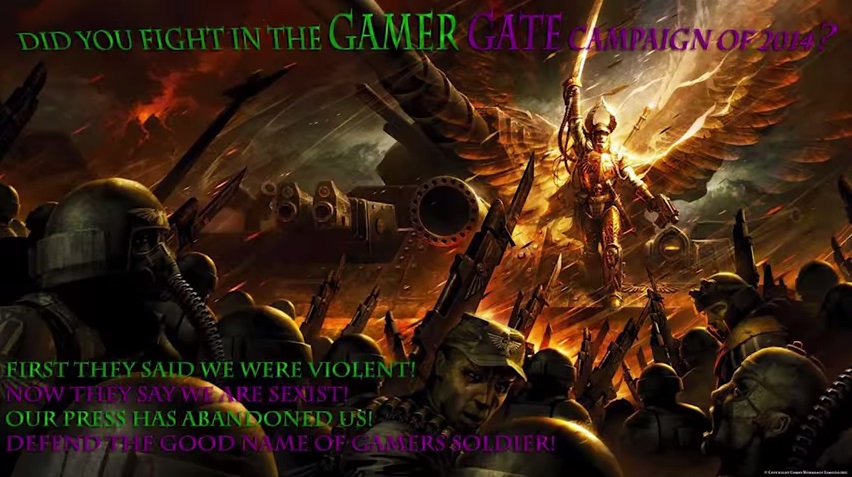 There’s a lot of contributing factors to GamerGate, almost all of them revolving around hatred of women, people of color, queer and trans folk, and pushing back against their increased visibility in culture and media. But while the “ethics in games journalism” thing was only ever a smoke screen to hide their repulsive behavior, there is something interesting about how they chose to communicate that smokescreen. The most common thing I saw directed at game critics (aside from general harassment) was a bizarre plea to not bring politics into their reviews.

Now that’s an absurd request on the face of it; all media is unavoidably political, by dint of it being created and consumed in a political context, so asking someone to review something completely apolitically would more often than not result in something akin to Jim Sterling’s 100 Percent Objective Review of FF13. And why would they even want that?

Because then they don’t have to think about it.

This seems to be at the root of a lot of harassment campaigns—perhaps not as much as hatred of women or minorities, but still deep inside: the desire to stick their fingers in their ears and pretend political issues don’t exist. It’s why some people have felt the need to spend the last 7 years harassing Anita Sarkeesian—not because she’s trying to take their games away, but because she’s demanding that they think critically about those games. To use an example from this specific fandom, after my January 40k article, I had people coming out of the woodwork to tell me all about the reasons women can’t be Space Marines or just calling me a mangina, completely unwilling to think critically about the game we both supposedly love and ignoring my broader point (or the fact that I had already addressed their points in the article itself).

When you completely disengage your critical thinking, it becomes very easy to embrace Warhammer 40k’s fascist architecture. Of course fascism is good: the humans in 40k are fascists, and they’re the good guys because they’re humans—ergo, their fascism must be good. It never crosses their minds that the humans aren’t necessarily the good guys. (I’ve actually argued in the past that the Craftworld Eldar are the clearest examples of heroes in the 40k universe, and that the Tau Empire represents the best hope for saving the place.) And when you already believe the ideas present in the text, it becomes that much easier to disengage your critical thinking, which is why critical tools are so important.

That’s also why it’s vital for creators to think about the message they’re sending with their works. Warhammer 40k is blatantly anti-fascist (a lot of anti-fascist media came out of the UK in the mid- to late 80s…wonder if that could possibly be related to Thatcher?), but it messes around too much for that condemnation to carry any weight among people who don’t want to hear it. I’m not suggesting they change anything major—remember, I do love this game—but maybe having a few more scenes emphasizing how awful this system is might help. And hey, it might be good to get some characters who aren’t Space Marines involved.

As I watched the electoral results with mounting horror on Tuesday night, I found myself wandering into some of the more aggressively awful spaces I’ve explored for research, to see how they were taking the news. They were naturally jubilant, and at one point I once again came across that picture of Trump, his face photoshopped onto the God-Emperor’s radiant body.

I snapped my laptop closed in disgust (as I did several times that evening) and my eyes were drawn to the Imperial Knight I had been painting that morning to take my mind off the election, sitting on my desk. I was briefly seized with the urge to hurl it across the room. Luckily the urge passed, partially because it’s an 140 dollar miniature (and none of this is Lady Kendra’s fault), but also because I resolved long ago to never let the more awful members of a fanbase drive me away from it. So regardless of how awful some of these fans are, don’t let them convince you to dislike the game.

But if Trump is the Emperor, I can see why some people might want to fall to Chaos.

James is a Connecticut-based, Alaskan-born cinephile with an obsession with The Room and a god complex. His interests include Warhammer 40k, the films of Nicolas Cage (both good and bad), and obscure moments in history. He writes movie reviews for Moar Powah under the name Elessar and also has a blog, where he is reviewing every episode ofThe X-Files at I Want to Review. His twitter can be found at Elessar42, and his Tumblr can be found at FootballInTuxedos.