Seems like the doctors went to the Kayleigh McEnany School of Coy Doublespeak. 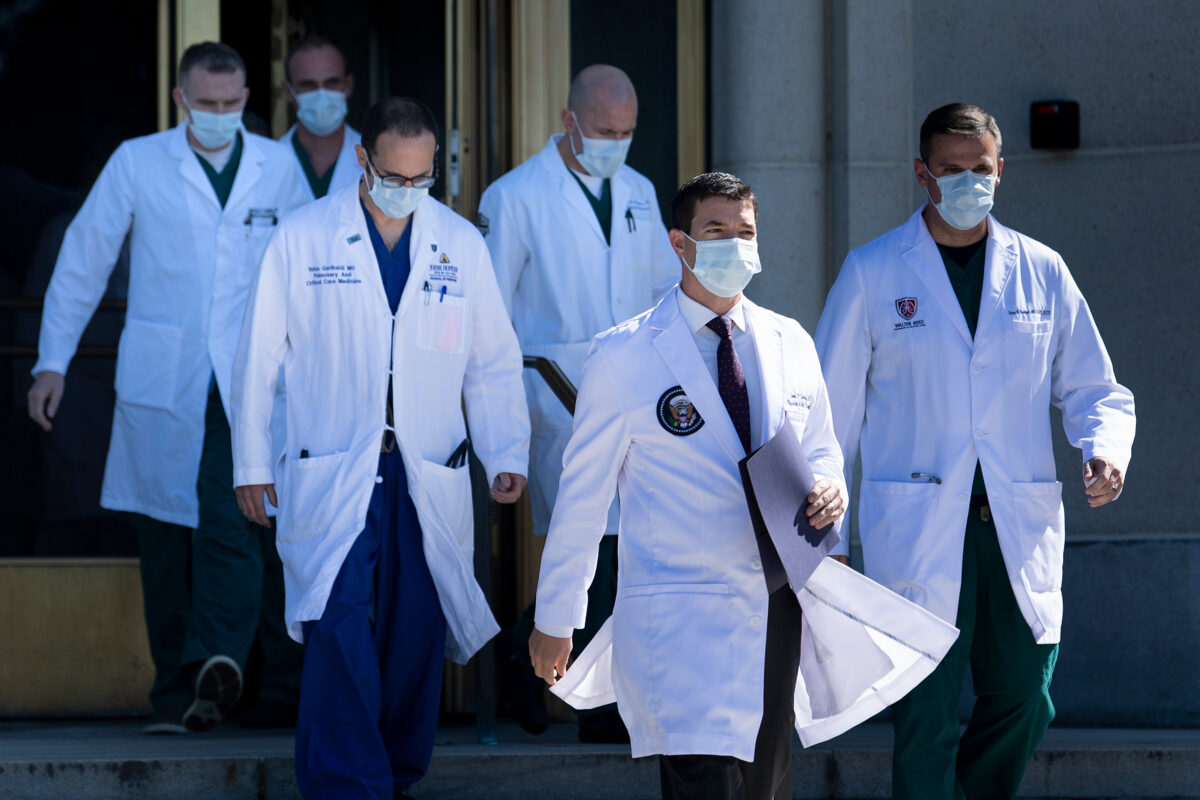 Yesterday, President Donald Trump was flown to Walter Reed National Military Medical Center to receive treatment for the coronavirus. Trump, who revealed that he tested positive for COVID-19 early Friday morning, has since taken up residence in the presidential suite of the hospital and is being attended to by its doctors. This morning the President’s physician, Navy Cmdr. Dr. Sean Conley, gave a press conference on Trump’s current medical status, accompanied by several other doctors.

Conley says we are 72 hours into the diagnosis. We were told around 1 am on Friday morning that POTUS was positive, which is only 36 hours ago.

If you were hoping for a sober, fact-based press conference, then clearly you haven’t been paying attention to any of Trump’s notoriously deceitful press secretaries. In the spirit of Sean Spicer, Sarah Huckabee Sanders, and Kayleigh McEnany, Dr. Conley delivered an update that was vague, confusing, and left reporters with many lingering questions.

Conley told reporters that Trump’s symptoms, including a fever, coughing, congestion, and fatigue, “are resolving and improving,” and that the president is being treated with the antiviral drug remdesivir. Dr. Conley added that Trump was “just 72 hours into the diagnosis now,” which implies Trump was diagnosed on Wednesday instead of Friday, when he made the announcement. Conley later clarified that it was “Day 3” since the diagnosis, but the confusion lends credence to the theory that Trump knew he had COVID-19 earlier than he announced it. It’s a disturbing but all too believable allegation, given that Trump attended a fundraiser at his Bedminster, New Jersey golf club, and has continued to host super-spreader events at the White House and across the country.

What is going on right now? The WH, which has a deep credibility issue w/ many, needs to clarify when the president got sick, whether he was ever on oxygen at any time, whether he is on a clear path to a full recovery, and whether he was traveling and holding rallies while ill?

Trump’s health condition is a matter of national security, but his team of doctors was unwilling to give concrete answers. When asked if oxygen was given to the president, Dr. Conley told reporters that Trump was not currently on supplemental oxygen, but refused to say whether or not he was previously given oxygen previously, saying, “None at this moment and yesterday with the team, while we were all here, he was not on oxygen,”.

This Conley guy is a classic slippery Trumpian character. Check out how he refuses to give a straight answer about whether Trump has ever been on supplemental oxygen. pic.twitter.com/9n2xOrzk6e

Conley gave a very positive report on Trump’s health, saying “This morning the president is doing very well,” Dr. Conley said. “At this time, the team and I are extremely happy with the progress the president has made.” Dr. Sean N. Dooley, another physician at Walter Reed, said, “He’s in exceptionally good spirits,” adding that Trump told doctors, “I feel like I could walk out of here today.”

The doctors just *cannot* Baghdad Bob their way through the president's active and ongoing hospitalization.

That smiling "He's not on oxygen right now" dance??

It's a *bad thing* for the US if the world knows reports on the president's condition can't be trusted.

Given the White House’s lack of credibility and the opaque answers from Walter Reed, it’s impossible to know what is actually going on with Trump’s health. An unnamed source familiar with Trump’s health told reporters “the president’s vitals over the last 24 hours were very concerning,” adding that “The next 48 hours will be critical in terms of his care, … We’re still not on a clear path to a full recovery.”

Two people close to the White House said in separate interviews that the president had trouble breathing on Friday and that his oxygen level dropped, prompting his doctors to give him supplemental oxygen while at the White House. @maggieNYT

It’s infuriating that we can’t get clear answers from the doctors, and that we live under a presidency that is so inured to lying that even the most basic queries cannot be satisfactorily answered. What a time to be sort of alive.

Source close to the WH confirmed Trump has received supplemental oxygen Friday. Trump “definitely has had oxygen,” the source said. Last night CNN reported Trump had been having trouble breathing.