The 2008 film was inspired by the rise of Apple and Amazon. 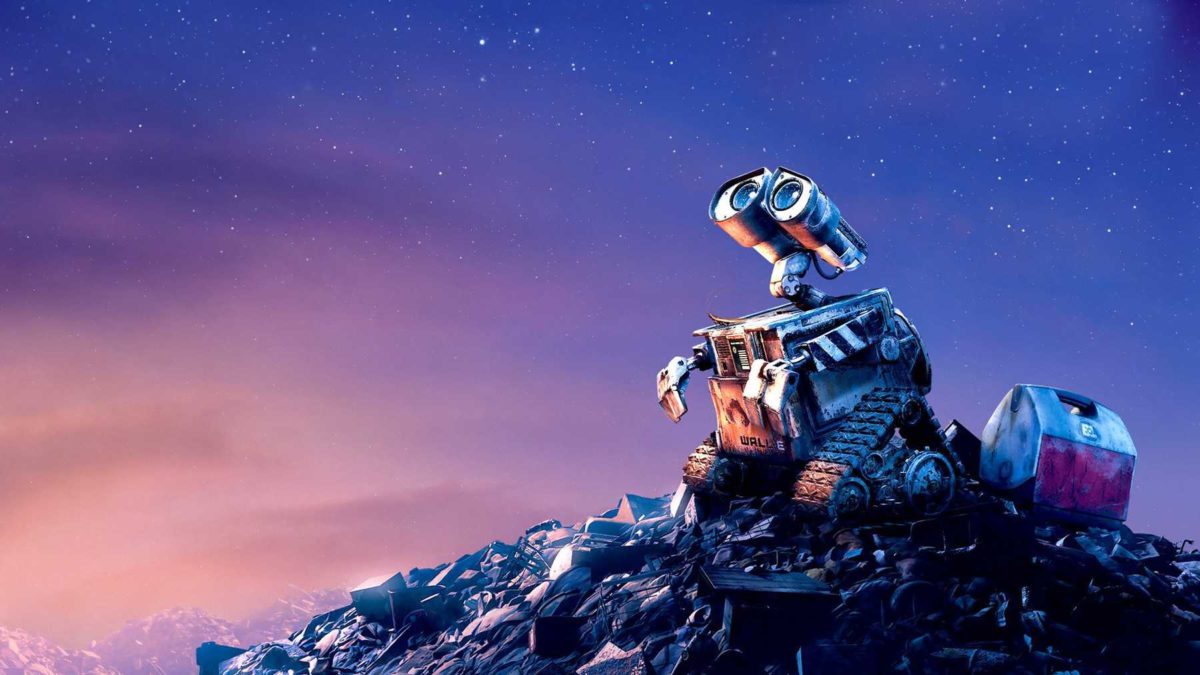 Many folks spent the week of Valentine’s Day ranking their favorite romantic movies. There are the obvious choices of course: When Harry Met Sally, Pretty Woman, Titanic, etc. But a curious addition to many lists was Pixar’s 2008 hit film WALL-E, about a sweet-hearted trash compacting robot who falls in love with EVE, a sleek scanning robot.

Pixar’s tender love story/allegory about consumption and waste is just as moving today, and scarily more prescient than ever. The film’s director Andrew Stanton discussed the legacy of WALL-E in an interview on The Hollywood Reporter‘s “It Happened in Hollywood” podcast.

Stanton knew he wanted to make a film about the last robot on Earth, but he didn’t land on a design concept until he borrowed his friend’s binoculars at a baseball game. Stanton said, “I borrowed his binoculars and then I missed an entire inning just looking at them and starting to make them look happy and mad and sad….That cracked it open for me. That’s pretty much what I did: I put binoculars on top of a trash compactor.”

Stanton discussed hiring sound design legend and voice actor Ben Burtt, the man who created the light saber sounds for the Star Wars films and the “voice” of R2-D2, to voice WALL-E. He also discussed the influences of the rise of Amazon and the abundance of trash humanity was creating with this accelerated consumerism. Stanton said, “It was really logic at the time, so we’re talking 2005-06, that led me to any of the science and environmental and sociological choices that I did, … I just went with a what was happening around me. We were having anywhere from two to a dozen boxes from Amazon show up at my doorstep every other day. I just started to think like, where does all this shit go?”

The film got inspiration from another tech giant: Apple. Stanton remarked that the iPhone, which came out in 2006, inspired the screens that hypnotize the helpless passengers on the starliner Axiom.

“The iPhone came out in ’06, two years before the movie came out. I was literally one of the first people to get the iPhone before it was brought out to the world officially because Steve [Jobs] was our boss…I started playing with it and was kind of crazily going why is this feeling familiar? This is basically the future and there should be nothing about this that’s familiar. It was the addictive quality of it,” Stanton says.

“I used to be a smoker when I was in college, and I remember that,” he continues. “That was way before there was a computer or anything else to distract you with. You would use a cigarette to just sort of pass the time and not be bored…But I remember then going, wow, this could get really outta hand fast. This is like a nicotine hit. And that’s what made me come up with the distraction of humanity through technology and the screens, and everybody being right next to each other.”

Before he passed away, Steve Jobs watched a rough cut of the film, and according to Stanton, “He loved it. The irony was not lost on him. I didn’t get to be inside his head. I think he was crossing his fingers that my slightly pessimistic view would be incorrect and that it would stay a fairy tale. But he was a big fan of the movie.”

It’s fascinating (and frightening) to consider the legacy of WALL-E, and how it predicted our screen addiction. If someone finally invents a safe version of those floating lounge chairs, humanity might be done for. But despite its prescience, I still found myself profoundly moved when I re-watched the film last week. It’s a love story that endures, not only between WALL-E and EVE, but between WALL-E and humanity.

That little droid’s love of Hello, Dolly! , Rubik’s Cubes, rubber duckies, and other cultural ephemera show a deep love for its creators. It’s fitting that WALL-E’s actions, however small, end up reversing the course of humanity and bring about the dawn of a new world. Not too shabby for a trash compactor.