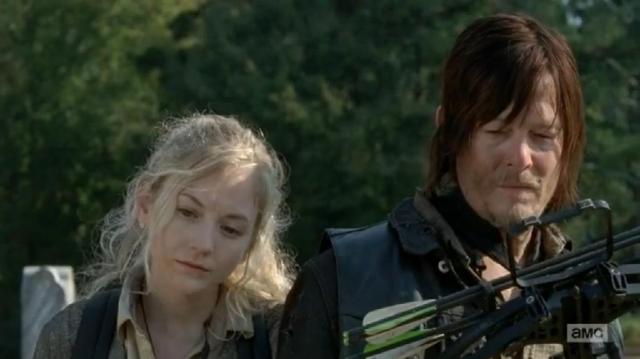 Earlier this month, a fan letter in The Walking Dead issue and an interview Robert Kirkman gave about Daryl Dixon’s sexuality combined together to make us hope against hope that the character might not be heterosexual. Well, I’ve got bad news and… well, more news: you’re not going to see anything about it this season, but nobody’s given a definitive answer on his sexuality yet.

Scott Gimple spoke to TV Line to address the issue and assure viewers that if Daryl isn’t heterosexual, it’s not building up to this massively ridiculous plot point. Which… I guess is a good thing?

“We know all sorts of things about the characters that we haven’t revealed, [But] We’re not holding back information on Daryl’s sexuality as any sort of big reveal. The fact that there’s still a question as to what Daryl’s orientation is in Season 5 absolutely speaks to Daryl’s character; he is a very guarded, very closed-off individual in a lot of ways. We have been able to see him ever so slowly open up and show the other characters aspect by aspect as to what makes him tick. That’s been a very satisfying journey for all of us on the creative side to portray. [And] he’s still on that journey. This is a character who is going to continue to grow closer to the other characters, [and] let his guard down, and let them see just who he is, in every way.”

Gmple also added that while Daryl’s sexuality won’t be addressed in the upcoming season 5. So. No gay Daryl, AND no Daryl/Carol or Daryl/Beth (who is definitely completely still alive and I won’t hear otherwise OKAY). He did note, however, the show would be adding a gay male character to the team. Cool, just as long as it’s that David Karp-looking cannibal from the last season. I’m tired of gay villains, y’all.