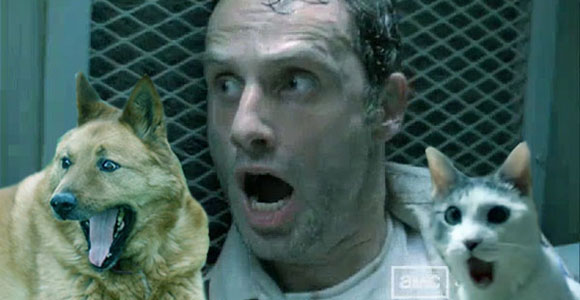 “We hope that zombies live forever, and we’ve just begun to find out what the post-apocalyptic world is like, so that we’ll be sitting here at the Barclays conference in 2022 discussing the fact that ‘Walking Dead’ is not over,” he said. “At that point, I think any one of the companies will have replaced the United States government and we’ll be in a complete free enterprise world in which there are no nations.”

I’m not sure what tone this was all said it but it sounds super weird to me. Like, he might be taking this apocalypse thing a bit too seriously. And I’m not quite sure what he means by “companies.”

Another weird thing is, Sapan mentioned AMC hit shows like Mad Men and Breaking Bad and how they would end, but somehow The Walking Dead is exempt from the normal flow of television. Because…zombies? I don’t know.

“We’ll all suffer from some minor heartbreak when these shows come to a natural close. Like some of the best shows in history, there will be a mantle that exists sort of virtually in people’s minds, and in the world maybe they’ll actually put a statue somewhere,” he said of the two other shows. “We will bring them to a close with the people who created them at the right time.”

I’m a bit biased in all of this because I’ve been disappointed with the show for a while but its ratings are strong, the finale had 12.4 million viewers. How long do you think the series could conceivably run? Robert Kirkman’s Image comic is still going strong after all but 2022 might be a bit of a stretch. Just imagine what middle-aged Carl would be like! Or an elderly Carl who can’t actually leave the house and uses a walker to fight off walkers!

(The Hollywood Reporter via MTV)