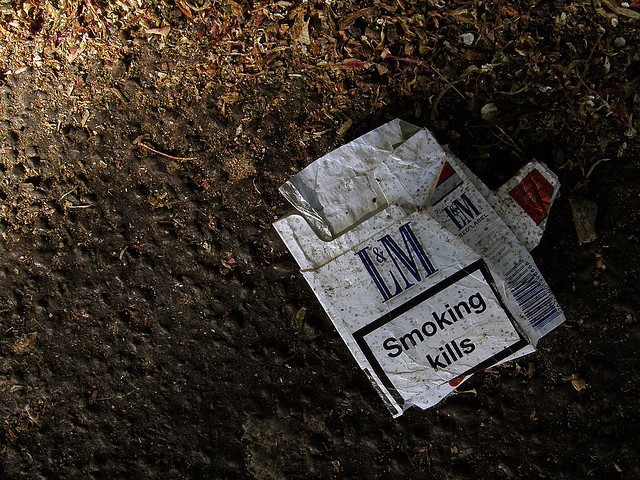 Yesterday, CVS made the surprising announcement that, in the interests of their customer’s health (or their company’s image), they will no longer carry tobacco products. In the wake of that landmark decision, Walgreens wants everyone to know that hey kid, if you want cancer sticks, they still got ’em.

Despite costing them an estimated 2 billion dollars in sales, CVS says phasing out tobacco products by next October is  “the right thing for us to do for our customers and our company to help people on their path to better health.” Or alternatively just a great PR move.

CVS’ statement didn’t really require response, but Walgreens still issued one yesterday afternoon, in which they invited everyone to come on down, they’ve got all the smokes you need, all the cool kids are doing it.

It’s a sign of Walgreens’ sway that they can afford to deliberately remind consumers they’re on the losing side of a national debate. Their statement is especially ballsy since it arrived after even the President commended CVS’ promise.

Obama praised CVS’ landmark decision, saying it “sets a powerful example, and today’s decision will help advance my administration’s efforts to reduce tobacco-related deaths, cancer, and heart disease, as well as bring down health care costs – ultimately saving lives and protecting untold numbers of families from pain and heartbreak for years to come.”

So yes, Walgreens’ money is made from heartbroken families, crippling health care costs, and undermining the Obama administration, but as the largest drug store corporation in the US, they want us to know that prioritizing the bottom line has been working out fine.

Walgreens’ response shows they don’t give a flying fraggle rock about CVS’ glorified publicity stunt, which makes sense, since smokers gonna smoke, and we all know that inhaling arsenic and nail polish is not the best thing for our bodies.  The statement says,

“The company has been evaluating its tobacco line for ‘some time,’ and said it ‘will continue to evaluate the choice of products our customers want, while also helping to educate them and providing smoking cessation products and alternatives that help reduce the demand for tobacco products.”

This stance  is obviously generating controversy, and not just because of its “buy what you want, you’re a big boy” attitude.

Some of the sheer shadiness of the statement possibly comes from it being issued not by Walgreens itself, but a rep from an outside PR firm. That might be one degree of separation too many, since Walgreens is repeatedly referred to as “Walgreen’s,” and the statement is peppered with inexplicable and unhelpful quotation marks.

If you read closely, it’s obvious that Walgreens is also admitting it’s about to make a mint by semi-evilly selling highly addictive products at the same time as smoking cessation tools. In other words, they’ve got it made.

Chris Morran wrote in The Consumerist that Walgreens even has a lucrative contract with scary-sounding GlaxoSmithKline, the drug company with a license for all US smoking cessation products.

Although CVS’ decision does make business sense for them as part of their transition from drugstore to clinic and health care provider, Walgreens may be the one who truly benefits from the tobacco product ban—not the estimated 43.8 million US smokers.

But hey, at least Walgreens will have some cigarettes to smoke in bed once they’ve had their way with us all.