Vulvatron’s First Ever Interview Is Majestic and Wonderful

Prepare yourselves for the boob spew! 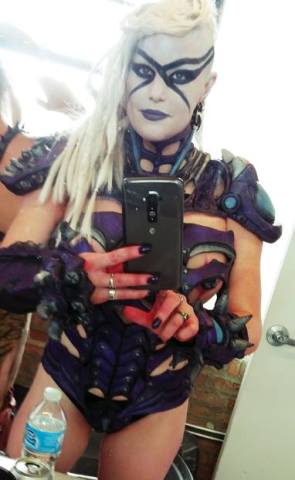 Last week the Internet got a glimpse at GWAR’s latest frontwoman and first female member since 2000. Her name is Vulvatron and she shoots blood out of her prosthetic boobs. We were all appropriately impressed—but not impressed enough, apparently, because she just decided to blow our minds and worm her way that much deeper into our hearts in her first ever interview.

The write-up comes from a website called Metal Injection, which dared to ask the new scumdog some… well, let’s just call them loaded questions (in that they are kind of loaded with crap). Her answers, however, are the stuff of which songs and myths are written:

Which member of GWAR did you sleep with to get the gig?
Vulvatron’s sexual prowess is far superior, and although I slept with the entire band and management at the same time, they were not able to keep up. My sexual functions are far too advanced to mate with most primitive forms.

Does sexism exist in GWAR? Are you only entitled to 70% of the crack compared to male members?
I consumed the entire crack rider, and then needed a further crack buyout for lunch, dinner, and aftershow. GWAR is an extremely sexist band, we all believe in having all of the sex all the time.

Now calm down, metal heads: like you, we’re reasonably sure that the questions were all meant to be satirical and that Vulvatron is in on the joke. But considering that so many female professionals in all kinds of industries do face these kinds questions about how their sex lives could be affecting their careers (rather than, you know, their talent or experience), it’s so delightful that Vulvatron had the opportunity to shoot that shit down with a well-aimed blood geyser. You know, from her boob. She does that.