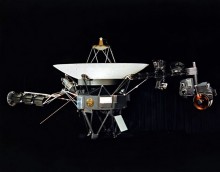 Voyager 1, an unmanned probe that NASA launched into space in 1977 to study the outer planets in our solar system, is still doing remarkable things 30 years after it photographed Jupiter and Saturn. According to a Voyager Project scientist, new data from the probe indicate that it is nearing the boundaries of interstellar space, the space between stars where matter becomes even more sparse.

10.8 billion miles from the Sun, Voyager 1 encountered a crucial shift in the solar wind, the charged particles emitted by the Sun: The wind’s outward velocity had slowed to zero and the wind was only detectable from the side, indicating that the spacecraft had crossed a key threshold within the heliosphere, the ‘bubble’ blown by the solar wind which marks the boundaries where the strength of our sun’s solar wind exceeds that of other stars.

“The solar wind has turned the corner,” said Ed Stone, Voyager project scientist based at the California Institute of Technology in Pasadena, Calif. “Voyager 1 is getting close to interstellar space.”

“When I realized that we were getting solid zeroes, I was amazed,” said Rob Decker, a Voyager Low-Energy Charged Particle Instrument co-investigator and senior staff scientist at the Johns Hopkins University Applied Physics Laboratory in Laurel, Md. “Here was Voyager, a spacecraft that has been a workhorse for 33 years, showing us something completely new again.”

The pivotal moment in Voyager 1‘s journey outside of our solar system is still to come, however; within about five years’ time, it is expected to cross over into the heliopause, the ‘official‘ edge of the solar system.