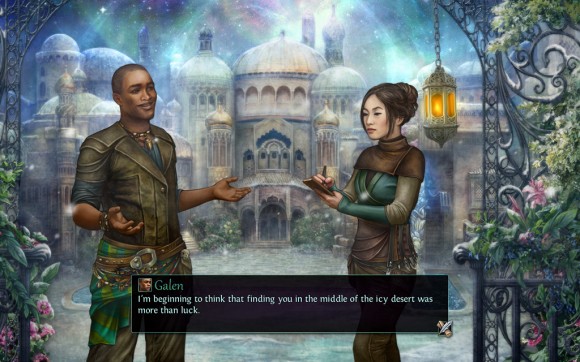 If you’ve consumed even a small amount of fantasy stories, you’ll know the scene I’m about to describe is something you don’t see every day. The stage is set in view of a wondrous city in a frozen wasteland, with gossamer auroras dancing above. Standing proudly beneath the city’s protective dome are sculpted towers and archways, offering sanctuary from the cold. In the foreground, there are skillfully wrought water pipes, diving through the ice to hot springs below. Everything speaks to the effort of some great civilization, rich with knowledge and power.

Our first protagonist appears, having nearly completed his perilous trek across the icy desert. He’s a doctor, and he’s come a long way to practice the art his culture is famous for. His mentor visits him in a dream, teasing him with riddles, and reminding him to be careful and wise. It’s exactly the sort of introductory conversation you’d expect in a story that begins with the end of a journey. Except that both characters are of color. As is the second protagonist, who appears later.

In a snowy fantasy setting.

I did not get to experience Solstice in its finished state, as the copy I received is a playable beta. The later chapters of the story are unknown to me, and there are still kinks to be worked out. The content needs some polish, and the music was mostly placeholders from developer MoaCube’s previous visual novel, Cinders (which I also enjoyed). While I can’t comment on the complete package yet, I can say that Solstice has everything a good mystery needs — legendary treasure, untouchable noble families, an insane archaeologist, and skeletons in every closet. Our two player characters — Galen, the doctor, and Yani, an expert technician — trade starring roles as they conduct their respective investigations. There’s a lot going on in Solstice, but the player has plenty of tools to keep on top of things. Important clues are automatically noted in your journal (pages handily tagged by character), and you can rewind the conversation if you missed a bit. The devs promise multiple story outcomes, and as I made my choices, I couldn’t help but wonder about the branches I left untouched.

From the moment I launched the game, I was smitten with the stunning artwork, which evokes an inviting world of swaying lanterns, burning incense, overgrown plants, and masterful technology. The backgrounds brought out the same feeling I used to have as a kid when looking at storybook illustrations — the slow satisfaction of studying the little details and imagining myself among them. My present circumstances could not have made me better primed for a setting like this. Here in Reykjavik, the days are getting ever shorter, the trees are going bare, and we had our first snow earlier this week. I was tickled to be taking part in a story about a bright city kept warm by hot springs, trying to cope with the onset of winter. As I cranked up my own geothermal heater, I found myself longing for streets lined with flowers that never die, and an ethereal dome to keep the wind away.

The “Jewel in the North” is home to a melting pot of wanderers from all corners. Though there’s some snarkery between Northerners and Southerners, the overall impression I got was of a community that respects each others’ differences. Galen and Yani’s cultural quirks are commented on, but in the portion of the story that I viewed, they were never treated as lesser (on the contrary, their respective skill-sets are highly valued). Sexuality is also handled with casual acceptance, as Galen turns down the advances of Constance, the sultry bathhouse owner (who I’ll get to momentarily), citing his preference for Kasiya, the handsome captain of the guard. Everything is cool here. All are welcome.

Solstice may only be a little indie title in a niche genre, but it’s willing to travel in narrative directions that the big dogs rarely do. It demonstrates the “risky” business of increasing character diversity is a non-issue when put into play. Solstice is about nothing more complicated than people from different places, with different stories to tell. That’s not risky. That’s interesting.

Solstice suffers from the same drawback as Cinders, in that it’s obvious the English text has been through the translation wringer (though here’s a cool thing: the devs have a forum thread asking for beta players to contribute notes on spelling and grammar — there’s even an invitation for it in-game). Still, while the phrasing may be clunky at times, the characters shine through anyway — particularly the women, who make up an even half of the dramatis personae. Yani, the brainy technician. Yakone, the tough caravan driver. Slava, the affable innkeeper. Laura, the jittery noble’s assistant. And yeah, Constance, the bathhouse owner. But here’s the thing — I am fully on board with having a female character who wears her sexuality on her sleeve (or lack of sleeves, in her case), so long as it’s not presented as the default value of womanhood. Because there are women like that. Just as there are women who are technicians, and innkeepers, and caravan drivers. I got a genuine sense of intelligence and autonomy from Constance, further bolstered by the fact that Galen (a player character, keep in mind) isn’t interested in her. She’s not a prize, or set decoration. She’s one facet of a city that represents a variety of ways to be a person.

And I really, really dig that.

Solstice is currently under development, with release planned between late 2013 and early 2014. Pre-orders (which grant beta access) can be purchased straight from the developer.