Here’s Why the Future of Virtual Reality Must Be Diverse 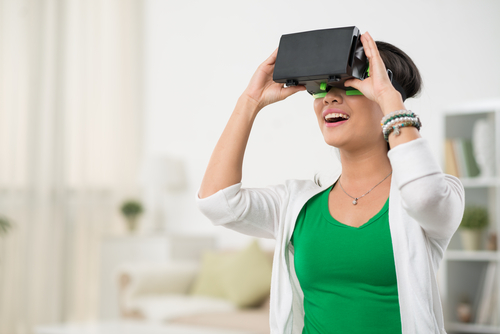 Take a moment to let this sink in: now that VR is real, we’ve never had a more perfect time to bring diversity into popular media and tell stories beyond the white/male/heterosexual-as-default experience.

Virtual and Augmented Reality tech has been hovering on the edges of mainstream culture for a while, and it’s about to break through and permanently change your work, leisure, and social life. There are some really fancy VR systems on the market, ones that require a gaming system or high-powered computer to run. But the most growth in VR markets is coming from smartphones. Most phones are now powerful enough to run applications that do all the VR work themselves, meaning you can pop your phone into a cheap cardboard or plastic holder, plug in some headphones, and experience 360 degrees of whatever you choose.

And the whatever you choose part is what’s really interesting right now. Now that the technology is practically ubiquitous, the next battle for VR will be over content. Companies are racing to aggregate videos, create original series, and make stunning interfaces in the hopes that they will break through as the Netflix or YouTube of VR. Right now, while everyone is trying to figure out how to use narrative, editing, and visual effects in the round, is the time to talk about why we need more diversity in visual media. Because while the need for more diverse stories is nothing new, the technology behind VR makes it particularly suited for intimacy and empathy.

Let’s think for a minute about hardware. VR headsets, no matter how simple or elaborate, work by splitting an image into two parts and presenting them to your eyes simultaneously. This is the same principle that old-school viewfinders use, but that’s just the beginning of VR. The display is angled to imitate the angle your eyes view the world from, sensors track your head movement so you can look around, and binaural audio in your headphones completes the immersive illusion.

The result is a visceral experience unlike any other. In the early days, VR even made viewers sick and disoriented until headsets and frame rates were calibrated more carefully to prevent dizziness. Even the most simple VR experiences produce big reactions. Animations that wouldn’t impress us on a flat screen seem amazing and magical in a VR headset. They essentially hack our senses to transport us to Mars, or underwater, or, you know, to watch Netflix in a bigger, fancier living room.

This intimacy, this realism even in the most extraordinary scenarios, makes VR the perfect medium to crack open the narrow range of storytelling that has followed us from VHS to DVD to the Age of Apps and beyond.

Contact hypothesis is a framework used in sociology and psychology that predicts the conditions under which exposure to a different group leads to increased tolerance and empathy. It’s used to improve relationships between groups that are having issues. The overall idea is that exposure to a group you’re unfamiliar with, along with support, common goals, and time, leads to understanding and a reduction of prejudice. And this phenomenon doesn’t have to take place in real life; there has been research showing that media can serve the same purpose. One study looked at the television show Will & Grace and showed strong evidence that regular viewing reduced prejudice towards the LBGTQIA community.

So what shows are being made so far? The two companies making a name for themselves in cinematic VR are Secret Location and Jaunt. Secret Location is currently producing a VR series that intersects with a Syfy series. They won the first Emmy for VR for their Sleepy Hollow experience, an extension of the successful Fox series. Jaunt has a smooth interface with a bunch of content for all sorts of audiences, but is specifically trying to produce stand alone Youtube-like series, with established filmmakers like Doug Liman (The Bourne Identity).

Essentially, both these companies are trying to build on existing franchises to create VR content rather than forge a new path. And that’s a mistake.

We’ve got the social science. We’ve got the technology. We have platforms that allow people to create content without any of the media giants dictating who to tell stories about. This is the time for stories that show our culture is so much more than the privileged few. Whichever platform gives us rich stories that appeal to audiences beyond white heterosexual middle-class men will rise above the crowd and become a force to be reckoned with in entertainment.

Note: A previous version of this article incorrectly stated that Jaunt is owned by Lexus. Those responsible for the error have been deposited into the Matrix.

Felix Morgan is an author, online dating consultant, and journalist. Her favorite movies usually involve any combination of blood, monsters, strange weather, and musical numbers. She has an *almost* doctoral degree from Texas Tech University where she specialized in research on fandom and viewer relationships with fictional characters. She lives in Austin with her two warrior-princess-ninja-superhero daughters and some other wild animals.