How Is the VR Industry Doing, Where Is It Going From Here? | The Mary Sue

State of the Virtual Reality Union: How Is the Industry Doing, and Where Is It Going From Here? 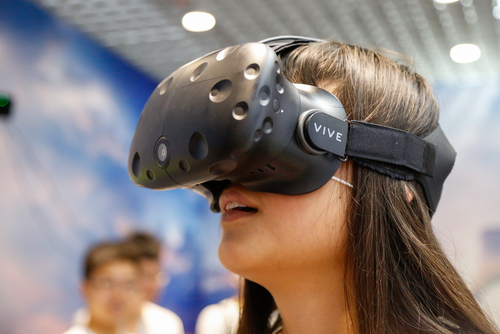 After 2015’s big Facebook Oculus and HTC/Valve’s Vive launches, one can’t help but wonder what has happened to virtual reality. 2016 was hailed as the consumer revolution in VR but it still hasn’t swept in and changed gaming as we know it. Unlike the failed 1990s VR revolution, it looks like this time VR is here to stay, so here is a look at the current state of VR for gaming.

Part of VR’s problem is the cost of entry. The high end kits from Oculus and Vive cost $680 and $1150 respectively and require a powerful PC, which would be about another $1000. Sony has a bundle that supplies everything needed for Playstation VR at $700, and then you need to add a PS4 at $350. The lower end of VR are the passive, no interactivity controllers, usually headsets that you slide your phone into. the expensive end of this market is the new Google Daydream that retails at $100, or you can get the Google Cardboard for $14 (Alibaba has similar ‘high end technical cardboard’ for around $4). Windows VR headsets (the cheapest is $300) are a new passive VR format pushed by Microsoft at CES 2017 and they should be avoided at all costs right now.

The big VR question is: where are the VR apps and games? Sony’s PSVR is particularly bad when it comes to actual content, with the only big exclusive so far being a Resident Evil that has a reputation of making people motion sick. It’s gotten so bad that Sony has stopped talking about its VR. Oculus was the first to market and opted for a walled garden of games, restricting them to its platform whenever possible. HTC/Valve’s philosophy was different and more open, which helped win consumers over during 2016 and Oculus has had to change their approach. For the most part, though, you’ll find the same games across both the Oculus and Vive. That being said, most people are turning to buying their games on Valve’s Steam platform.

Sony can’t exactly turn to Steam, and they’ve admitted they made too many PSVR headsets. Still, they’ve sold the most units. VR manufacturers are universally shy when it comes to talking about sales but that doesn’t stop the unofficial figures and a report from Super Data Research, which pegs 2016 VR sales at:

The cheaper and more accessible VR is, the more units it sells—no huge surprise, unless you’re the Vive. It’s more expensive than the Oculus, but it’s pulling in higher numbers. This is due to Vive’s technology lead, with interactive hand controllers built in from the start, whereas Oculus has only recently launched its controllers. Oculus is in an ongoing game of catch-up that has been hampered by internal politics and the ZeniMax lawsuit, which they lost.

ZeniMax won half a billion dollars as they proved in court that Oculus co-founder Palmer Luckey broke an NDA and stole ZeniMax trade secrets in order to build the Oculus. It has been announced that Oculus will be appealing the verdict. Facebook purchased Oculus and currently employs Palmer Luckey but has kept him away from Oculus events. Luckey has a history of supporting right-wing politics and hate groups; he also paid people through a company called Nimble America to ‘shit-post’ about Hillary Clinton during the 2016 election.

At CES 2017, Vive had no announcement about the Vive 2, but they did release an addon to the current headset that includes headphones, greater comfort, and a new product that can be attached to any real world object to bring it into VR: the Vive Tracker. This tracker allows people to hold VR bats or rackets in games, or it can track hands or feet, or you can hold toy guns that kickback when you pull the trigger for VR FPS action. Vive is the current leader and that’s not going to change as they are already previewing new hand controllers.

The market potential for VR is huge. Back in 2014, the market was an estimated $90M. By 2018, it’s believed that figure will grow to $5.2B. It’s not quite so rosy yet, as Oculus is at a slight loss. I assume Sony is doing the same but they refuse to say, and the Vive is sold at a slight profit. VR is not exactly printing money but it’s here and it’s not going away anytime soon.

So what do I think should you buy? First I recommend that you get a cardboard headset and see if that works for your eyes and if you get motion sick. If that works for you, then buy the Vive. It’s VR’s Ferrari, driven by Hillary and Gabe Newell, as opposed to Oculus’ Toyota Matrix driven by Trump and Palmer Luckey, or Sony’s Tata Nano. No one can find the keys to that. Vive’s quick updates and the quality of the headset and controller tracking are in a class of their own. The new Tracker addon is fantastic and allows for much more interactive gaming—and that’s what VR should be all about.

We don’t know for sure if VR is on the 4-6 year console cycle or if it’s on a faster refresh cycle like the iPhone. The wait for the second generation of VR headsets has been holding people back from jumping into the market, myself included. But with its recent updates, Vive has signaled that each component of its VR unit will update separately, so you’ll only need to update bits over time—but they’ll all still work together. This year saw the updated headset earphones and the Tracker, and next year it’s the new controllers, with maybe a new headset in 2019. I’ve not purchased any VR other than cardboard-based ones, although I’ve tried them out. I’m waiting for Q2 this year when the new Vive addons come out, then I’ll jump in on a Vive.