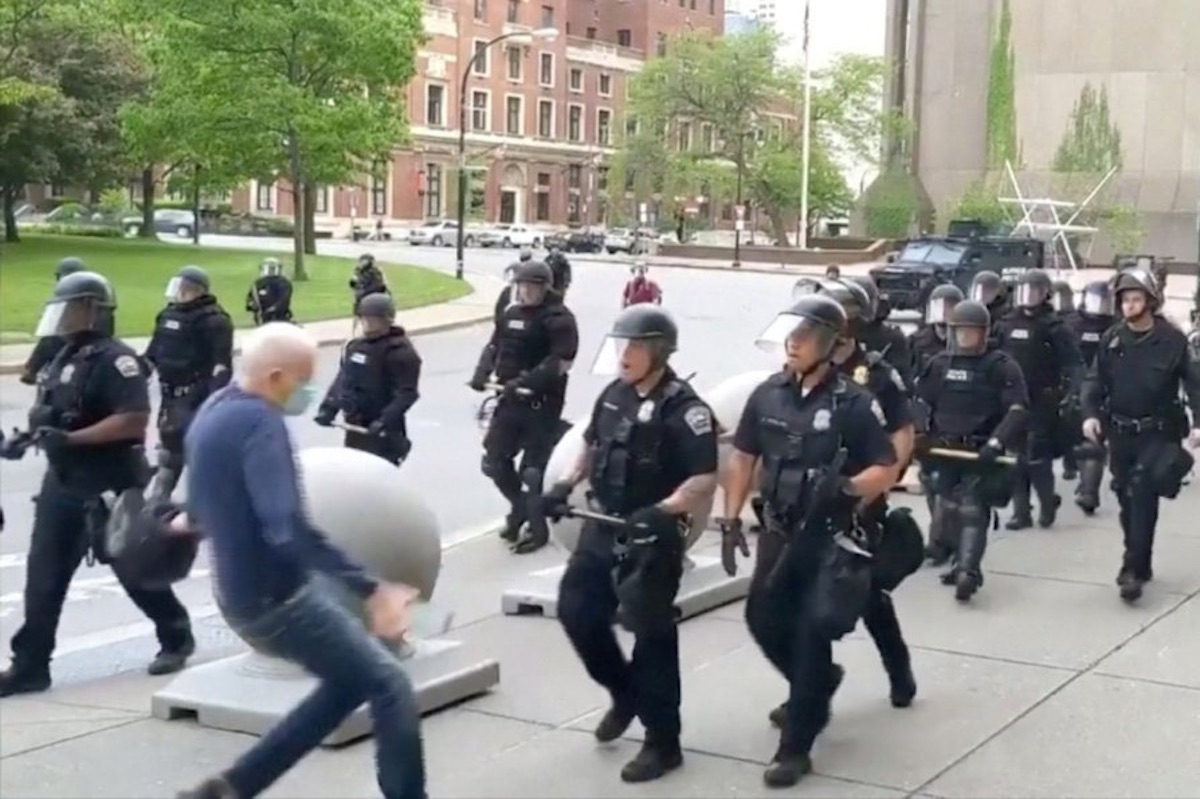 A 75-year-old man was seriously injured after being shoved by police in Buffalo, New York on Thursday. The viscerally affecting video exploded across the internet, becoming emblematic of the unnecessary and brutal force the police deploy every day and their outrageous, violent conduct country-wide against protesters who are rallying to end this same police brutality.

If you haven’t watched the video yet, please be cautioned that it is extremely upsetting to watch.

This is so difficult to watch but I urge you to if you can.

An elderly man pushed over by Buffalo PD…he’s bleeding.

An officer leans down and is told to move on by another officer.

The man, now identified as Martin Gugino, is reported to be in serious but stable condition at an area hospital. Many yesterday feared that he might not have survived this assault. “He was 75” trended on Twitter as social media users responded with shock.

You should know that the first official statement from the Buffalo police’s spokesperson was that the man “tripped and fell.” If there were no video of this incident, there would be no international condemnation. The knee-jerk lies from the police come as disturbingly quickly as their knee-jerk use of violence.

According to @JeffRussoWKBW a Buffalo Police Department spokesperson gave this statement in apparent reference to this?!

“during that skirmish involving protestors, one person was injured when he tripped & fell”

Are they aware cameras exist or?pic.twitter.com/86u5VmvbF2

7 Eyewitness News anchor Ashley Rowe tweeted this morning that the Buffalo PD spokesperson is the same person as the spokesperson for the Mayor’s office. This obvious conflict of interest is demonstrative of the quantum entanglement of politicians and the police. Rowe did so at the risk of her own career, jeopardizing her access.

THREAD:
While I have your attention:

After it became clear via video what had occurred and facing mass outcry, two of the officers who had contact with Gugino were suspended. In the time between beginning to write up this article and now, the story has had another major development: 57 officers have resigned from Buffalo’s Emergency Response Team—not because of this event, but because of the officers’ suspension. Yes, you read that correctly.

As a way of avoiding accountability is more like it.

The New York Times describes the scene in full, which I appreciate, because the video makes me violently ill every time I watch it:

The video taken by WBFO, a local radio station, shows the man approaching a group of officers during a protest stemming from the death of George Floyd. After he stops in front of them to talk, an officer yells, “push him back” three times; one officer pushes his arm into the man’s chest, while another extends his baton toward him with both hands.

The man is seen flailing backward, landing just out of range of the camera, with blood immediately leaking from his right ear. The video shows an officer leaning down to examine him, but another officer then pulls the first officer away. Several other officers are seen walking by the man, motionless on the ground, without checking on him.

As horrific as this video is to watch, and as abhorrent as the police’s actions are here (and the continued response from BPD officers), this is only the tiniest fraction of police violence in America. This is also the reality that Black people encounter every day of their lives. As the eminent novelist N.K. Jemisin tweeted of the video:

Psst. That awful video in which a white person is getting their skull cracked by a cop? That happens to black people ALL THE TIME. Doesn’t usually make the news. That visceral rage you feel? The need to jump in, stop it, do something? Imagine feeling like that your whole life.

Janelle Monáe highlighted what many on Twitter have been saying since the protests started: Those images of the police kneeling with protesters, hugging them, and joining in with marches are performative spectacles, because the next day, or the next hour, or the next minute, this is what occurs:

International condemnation has been swift, though not nearly loud enough from official channels. We’ve more than reached the point where official rebukes from concerned nations—let alone our own elected officials—should be arriving on the regular.

Still waiting for the EU and individual democratic nations to officially condemn the police brutality and attacks on the free press escalating the USA.
For how long are we going to stand by, watch and say nothing? https://t.co/OtJosMbTaZ

One of the elements of the video that horrifies—beyond the terrible rush to violence—is how many officers simply move past the senior citizen bleeding from the head on the pavement. These are ostensibly the people who swear to protect and serve, and they are doing nothing of the kind. It also negates one of the favorite arguments of the pro-police crowd: that a few “bad apples” are responsible for the most reprehensible behavior. It’s clear that bad apples have rotted the entire barrel—that the barrel has always been rotten.

Even those officers who might have felt compelled to help, out of their sworn oaths or basic humanity, will not break ranks. The one who appears to have wanted to stop still moves on. Gugino’s seeming allegiance as a protester has turned him into an enemy combatant in their eyes. An injured animal might receive a more humane response from these cops than a man.

The police are proving the very point of the protests against brutality with a surety that is documented further every day. In New York City, where the mayor has been licking the police commissioner’s boots in real-time, Bill de Blasio’s willful refusal to even view protest footage produced a searing op-ed from the NYT’s editorial board: “Mayor de Blasio, Open Your Eyes. The Police Are Out of Control.”

New York Governor Andrew Cuomo, fast burning through the goodwill he earned fighting coronavirus, has been either silent or conciliatory to the police after any attempts at criticism. In the past, he has opposed every political measure towards police reform. This video was, apparently, a step too far for him; he said that he was “sickened” by it. Per The Times:

“The incident in Buffalo is wholly unjustified and utterly disgraceful,” Mr. Cuomo said. “I’ve spoken with City of Buffalo Mayor Byron Brown and we agree that the officers involved should be immediately suspended. Police officers must enforce — NOT ABUSE — the law.”

Governor, I have hundreds of other videos, from the last week alone, for you to watch.

Cuomo is still concerned with protesters’ “disrespect” for the police, who have been beating them and harshly enforcing a curfew citywide that gives them free rein to harass, intimidate, physically attack, and arrest and hold people in dangerous, pandemic-spreading conditions.

It is not illegal to disrespect the police. It is illegal (in theory, if not in practice) for them to beat the shit out of you for that. https://t.co/HyytvOyhjT

The problem with Buffalo, and many responses to the filmed police violence, is that suspending the officers in question does nothing to change the environment in which this occurred. It again suggests the temporary removal of some “bad apples” can reverse a case of rot. It cannot. The police are behaving in this fashion because they are trained and taught to expect no repercussions. Mayors, governors, and, on occasion, police leaders desperately scrabble to censure a few officers because if they do not, it’s impossible for them to justify their continued full-throated support of the police state.

To be sure, much of the outrage this video has kicked up comes from the fact that this is an elderly white man subject to violence. To see a member of what is the most privileged status in America assaulted and ignored has shaken many previously complacent people to the bone. They are awakening to the fact that the police do not serve anyone who stands in any kind of opposition to them, and that designation can come on a dime. No one is safe from police impunity.

That it takes watching someone brutalized who looks more like yourself for many to feel horror is a serious problem in this country, but for now, I welcome the newly radicalized Americans calling out for this police-born madness to stop. Welcome.