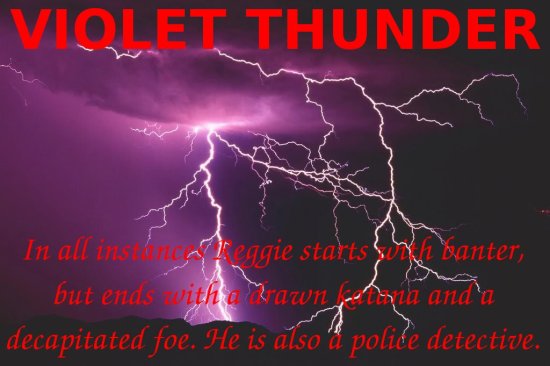 What follows is a cover letter that, allegedly, accompanied four pages of a forthcoming novel. But there is nothing I can say that will prepare you for VIOLET THUNDER. I simply ask that you read on, with an open mind.

Prepare to be blown away. In your hands you hold the first four pages of my debut epic, VIOLET THUNDER. You have the truly unique opportunity to be one of the first to read a work that will undoubtedly revolutionize the publishing world. Borrowing tropes from the epic fantasy, supernatural detective, and harlequin romance genres, I have crafted the first wholly original masterpiece in probably at least a century.

I know quality writing, and know a lot of other people who know quality writing. A sample chapter presented to my mother’s book club was described as, and I quote, “like nothing they had ever read before”. My high school English teacher told me that I should submit it right away, even though I only shared the first half of the first draft.

Now, I understand that conventionally you are expecting to see the first five pages. I haven’t done that. Instead I am sending the first FOUR, so convinced am I that what you hold in your (no doubt trembling) hands is 20% better than anything you have ever read. Ever. Now, I am intimately familiar with everything you publish, but to avoid embarrassing any of your other authors I will not name names. Suffice it to say that when you finish VIOLET THUNDER it is very likely that you will forget them, and will likely shit joy and barf rainbows.

My story follows the adventurous life of Sir Reginald Garret Von White Castle, a 900 year old katana wielding swordfighter from Prussia who, despite his great age and staggering accomplishments chooses to associate with and speak exactly like a modern day high school kid. From the opening line “I always knew that, in teh end, I would be fucked by unicorns and glitter” to the mind blowing dénouement, Reginald leads you through a clandestine world of classic and completely new supernatural creatures who have all chosen to masquerade as high schoolers in a typical Midwest town with no defining features or characteristics. This is so a reader could easily imagine him- or herself there (VIOLET THUNDER will appeal to both genders, and anyone who is or ever has gone through a trying transition to adulthood).

VIOLET THUNDER begins when Reggie’s best friend Bob is kidnapped from the high school shower after third period gym. Bob is a figmentationist, a person who can make anything happen that he imagines, except that it is never useful or impactful, and generally only functions when it is convenient for me, the author, to have it do so. Obviously Reggie isn’t going to stand for this, so he sets upon a journey of discovery, where he confronts glowing magic vampires, a succubae sponsored lesbian biker gang, mean cheerleaders, the sexually repressed high school councilor who is also a troll, and many other things so shocking that you need to read them in context to avoid some sort of brain hemorrhage. In all instances Reggie starts with banter, but ends with a drawn katana and a decapitated foe. He is also a police detective.

Through twists and turns literally nobody has seen coming, Reggie ends up in a final confrontation atop an incongruous Midwest skyscraper facing down his ex-girlfriend who now rides a magic unicorn who poops glitter and controls zombies. I will not spoil the end for you, but suffice it to say that when they do it, it is totally hot. You will be amazed when you finally discover the totally hidden meaning of Reggie’s VIOLET THUNDER.

Please respond promptly, as I have simultaneously sent this to literally everyone in the publishing industry that I could find on the internet. If you do not happen to be the first person to snap up the rights to VIOLET THUNDER and all future sequels, I apologize. Judging by what I think authors make, this series should totally be worth at least a million dollars.