Vikings Filed Their Teeth to Remind You They Are Totally Hardcore 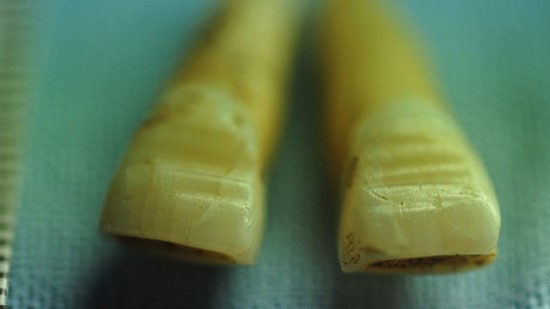 In 2009, a pit filled with skeletons was found near Weymouth, England. The bones were covered in slash marks and their bodies broken apart after death; skulls, legbones, and ribcages neatly sorted into piles. In all, 54 bodies were found in this gruesome horde. This was no modern-day massacre: Archaeologists determined that these were Viking raiders from the 10th or 11th century, and had likely died during an attack against the Britons. But it was what was inside the heads of these dead warriors that interested scientists so much.

The front teeth of these Norsemen had horizontal lines cleanly filed into them. The lines were so carefully made, and so deliberately cut that archaeologists feel that they must have been made by a master craftsman. Someone, long ago, made their living helping young Viking men get some bling up in their grill. Archaeologists feel that these patterns were likely cut to make the warriors appear fiercer to their enemies, or to show off their manliness to other Vikings. Oxford archaeologist David Score told the UK Guardian:

The purpose behind filed teeth remains unclear but as we know these men were warriors, it may have been to frighten opponents in battle or to show their status as a great fighter. […] It’s difficult to say how painful the process of filing teeth may have been, but it wouldn’t have been a pleasant experience.

Surely not. As an interesting side note to the posturing of ancient men, the horde of bodies where this discovery was made held 54 complete skeletons and 3 whom were missing their heads. Archaeologists think that the Viking’s presumed killers, the Britons, took some of the heads home as trophies. Teeth filing, head-stealing, isn’t the ancient world awesome?

The io9 blog, which covered the story, points out that the first example of Viking tooth modification was found in 2006 and reported by National Geographic. In the report, some 557 Viking corpses were examined by Swedish archaeologists, who found evidence of tooth filing on 24 of them. This lead to some speculation about from whom these particular Vikings may have picked up the practice. Apparently, they are the only known European group to adopt teeth filing, though it is a worldwide practice.

Some have suggested that the Vikings may have picked up this practice from their forays into the New World. Io9 themselves ponder that Vikings may have adopted the practice from “paleoamericans,” which would be difficult considering this refers to an age thousands of years before the Vikings showed up. However, the point stands that a theory linking Viking tooth-filing to the New World is out there. Now, I’m going to put on my amateur Viking-ologist (horned) hat on for a second and take issue with that particular claim. First off: yes, it is established fact that the Vikings made it to the New World and even built a settlement at the L’Anse aux Meadows in northern Canada. Unfortunately, this is the only concerete evidence of Viking exploration in North America.

Now, in the National Geographic article, they quote the Smithsonian’s Viking expert William Fitzhugh as saying that he has seen similar tooth carving in Great Lakes Native American tribes and in Illinois, Arizona, and Georgia. (Note: there is no quote in which Ftizhugh claims a direct connection between these groups and Vikings, only that he’s seen similar work in those regions.) Those are far, far away from the only known Viking settlement in North America. The issue is muddled, of course, because the Viking sagas refer to their North American settlement as Vinland and suggest that grape production was possible there. The grape issue has been a sticking point for sometime, since such fruit would be hard to come by in northern Canada and would place Vinland further south in the U.S., but according to Wikipedia, the L’anse aux Meadows area is generally regarded as the hub of Viking activity in the New World — which is a far cry from thosee tooth-filing Native American groups.

It’s also noteworthy that the skraelings — a presumed native group encountered by the Vikings and mentioned in the sagas — are describes as being far from amicable toward the Norsemen. In fact, they give the Vikings at Vinland some pretty sound beatings and are at least part of the reason the sagas give for why the settlers left North America. If the Vikings did learn tooth filing from Native Americans, it was almost certainly because they themselves were terrified.

Now, obviously, history is full of surprises. It is possible that the Vikings learned about the whole teeth thing from “skraelings,” but there could be a simpler solution. Vikings were an extremely well-traveled people, and were known to be active in the Mediterranean and even ports further west. They were known to be active in Eastern Europe, and even parts of the middle east. It seems to me (again, not a professional scholar) that it’s more likely that the Vikings encountered a group somewhere in the Old World and acquired the practice from them.  In the original National Geographic article, West African groups are cited as another group that could have given the Vikings the bright idea to put ridges in their teeth during their Mediterranean voyages. After all, we know the Vikings spent much long in the old world than the new.

Of course, the fact that Vikings ridged their teeth could be indicative of connections at which we can only guess. These new discoveries simply drive home the fact that the Vikings were some of the most well-traveled members of the ancient world. How well traveled and with whom will almost certainly be a point of contention in Viking scholarship, possibly forever.

(via UK Guardian, image via io9)