Fog Will Not Save You From Vikings 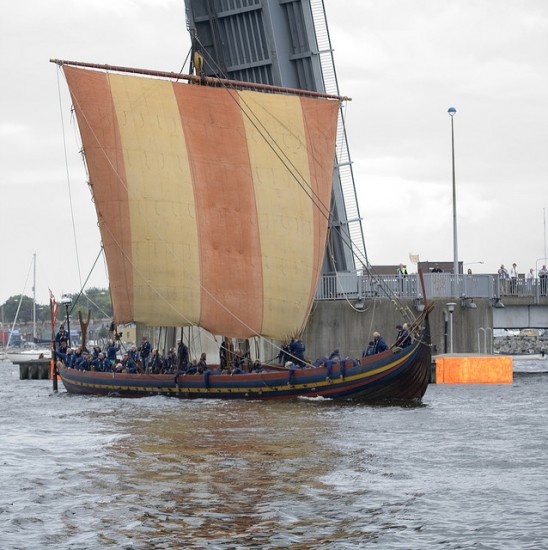 Vikings are already famous for their beards and badassery, not the least of which springs from their sailing prowess. Spreading from Sweden and Norway, the Vikings sailed and settled Northern England, Iceland, Greenland, and were the first Europeans to arrive in North America. They also pillaged and terrorized an unready European populace with their ferocity and totally sweet boats, but a lingering question faced by historians is how they managed to sail as well as they did with such limited technology.

Navigation in the far north poses several unique problems. First off, compasses don’t operate as well so close to the North Pole, and weren’t introduced to Scandinavia until after the Viking period. Secondly, for the warmest part of the year, the sun generally does not fully set, making it impossible to navigate using stars. It’s been fairly well accepted that Norse sailors used a sun-dial like device, but those would only function when the sun is visible. Fog or other weather common on the North Atlantic would have easily obscured the sun, making it extremely difficult to discern direction.

One teasing reference that the Vikings had a trick for dealing with such situations was recorded in the saga Rauðúlfs þáttr. In the story, a man confirms the position of the sun by looking at the sky through a crystal. Far from being magical, Danish archaeologist Thorkild Ramskou suggested in 1967 that the so-called “sunstone” might have allowed the Norse to see the polarized light passing through the clouds and make a reasonable guess as to the position of the sun.

The stones may have worked much the same as modern polarized sunglasses, which filter light based on its direction. Wired explains:

The stone would like have been made of a so-called birefringent material, like calcite or certain plastics, that can split light into separate rays.The atmosphere similarly splits sunlight into a pattern of concentric rings. Looking through the crystal and rotating it would make the sky appear to brighten and fade, as certain directions of light were transmitted or blocked. When the light coming through the crystal was polarized the same way as through the atmosphere, the crystal would appear brightest and points toward the sun. By checking the polarization at two different points in the sky, the navigators could determine the invisible sun’s location

But the use of sunstones remained purely theoretical until Gábor Horváth of Hungary’s Eötvös University decided to attempt a series of experiments to test the theory’s viability. From 2001 to 2007, Horváth and others made observations of the sun while in various sailing conditions, presenting their findings in a paper published this week in Philosophical Transactions of the Royal Society B. The researches concluded that the sun could be found through fog and clouds, though not always definitively depending on the severity of the weather. Further experiments are in the works, hoping to determine exactly how useful the technique would have been to early seafarers.

While the sunstone theory is intriguing, it is far from conclusive. From Scientific American:

Surviving written records indicate that Viking and early medieval sailors crossed the north Atlantic using the sun’s position on clear days as a guide, in combination with the positions of coastlines, flight patterns of birds, migration paths of whales and distant clouds over islands, says Christian Keller, a specialist in North Atlantic archaeology at the University of Oslo. “You don’t need to be a wizard,” he says. “But you do need to combine a lot of different sorts of observations.”

Despite the inherent awesomeness of the Vikings, modern science will have to go a bit further to prove that the longships that ruled the North Atlantic a thousand years ago carried sunstones, and that their legendary sailors could see through the clouds﻿.

(via Wired and Scientific American, image via infomatique)