We had the opportunity to visit artist Cliff Chiang’s studio in Brooklyn to talk about his work on titles like Wonder Women and Paper Girls, what he’s reading now, and more.

In a studio filled with posters, full bookshelves, and posed figurines (as well as the casual Eisner), Chiang took us through his digital process–something that he’s honed and refined over time. During our visit, Chiang patiently answered all my curiosities about both the space and his art. When I pointed at his wall, he explained the significance of images he has framed on the walls, a mix of gifts and inspiration.

He even flipped to the image of his 1988 self from the yearbook he used to draw inspiration for the distinctive outfits and looks of Paper Girls, his thrilling sci-fi series with writer Brian K. Vaughan and colorist Matt Wilson. (Seriously, pick up a copy if you haven’t yet. Make it a Christmas present!) From there we had a chance to talk about his career and how he found himself drawing and relating to a great number of female superheroes.

We also touched a bit on how growing up as an Asian-American kid informs some of his nerdiness after I asked if he ever related to the double-life superheroes lead. At the end, Chiang explains what makes comics special for him and how the medium opens up possibilities in a unique way.

After our interview, Chiang gave each of us a signed copy of Paper Girls #10, and our video editor Alec wanted to spread the Paper Girls joy with a small giveaway! If you want to enter, all you have to do to enter is be sure you’re following us on Twitter (so we can DM you if you win!) and tweet the following in its entirety with no alterations:

Unfortunately, this is only for those in the United States and we’ll alert our winner next week. Good luck! 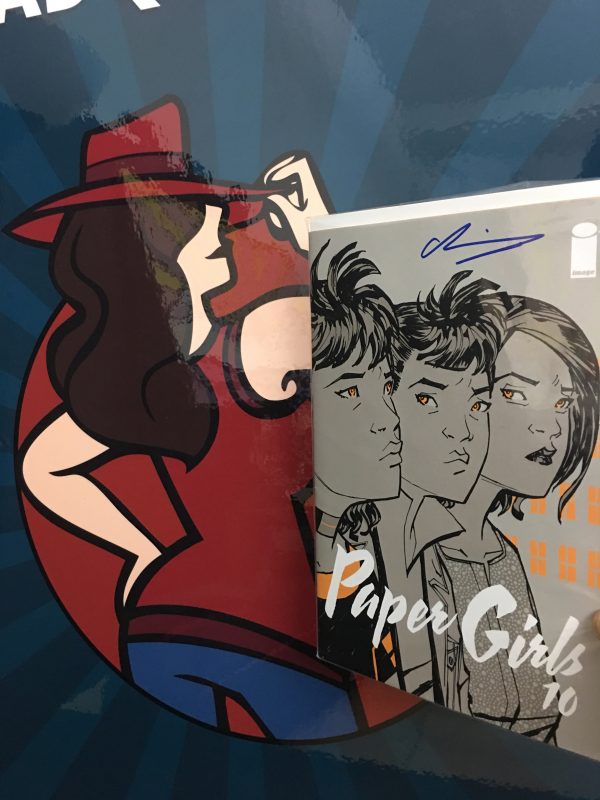 I learned a lot from Chiang in the time we spent at his studio, and I hope other young creatives will get some of that as well. Let us know what you thought of the video below!