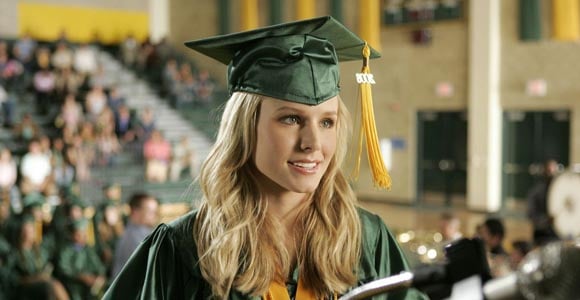 We were excited to hear of a Veronica Mars movie Kickstarter, thrilled when it was fully funded (and then some!), and then left to wait in horrible anticipation until it actually came to fruition. Luckily, some fine folks thought to ask creator Rob Thomas what he has in store for dear ol’ Veronica in said film and he obligingly gave a few details.

While some of us might have been hoping to see the future version of Veronica we got a sneak peek of in Thomas’ “Season 4 trailer,” what we’ll be getting is something between that and where we left her in Season 3. In an interview with TV Line he said:

She transferred away from Hearst college after that freshman year and went up to Stanford and finished her undergraduate degree. And then she went to Columbia Law School. She’s certainly been back to Neptune from time to time to see her dad and Mac and Wallace, but she hasn’t worked a PI case since the last one we all saw in the final episode of Season 3. She ruined her dad’s chance for re-election and she decided that that path had caused too much chaos in her life. And so she hasn’t worked a PI case in nine years. And when we meet her, she’s sort of like where Tom Cruise was in the beginning of The Firm. She’s between having graduated and taken the bar and she’s interviewing at various law firms in New York.

All I can say is, thank god she went to another college. The awful trap high school shows fall in, Buffy comes to mind, is when the cast all has to stay in town for the show to survive and smart people (like Willow) don’t get the opportunity to go to someplace like Yale or Harvard.

While we’ll be seeing some characters return, Thomas also mentioned the movie wouldn’t get too bogged down with past storylines so it could be accessible for new viewers. “Veronica will survive the movie,” he made sure to say. “I can’t promise anyone else does though. But there will be an opportunity for Veronica do to her thing again.”

Thomas also said Veronica’s relationship with her father will play a big role and that she’ll have a boyfriend who won’t be Logan. In fact, she hasn’t seen him in nine years. What do you think of this direction?