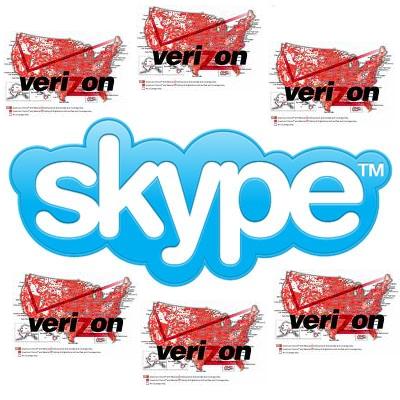 It looks like last week’s rumors are true: Verizon and Skype have announced an earth-shattering deal that will bring unlimited Skype calling to users on its 3G network. For the Skype uninitiated, this is a huge deal because by connecting with Skype, Verizon is letting its customers make free calls to other Skype users and very cheap voice over IP calls to local and international numbers, all without using up minutes   — a reversal of wireless carriers’ traditional priorities, to say the least.  According to Reuters, this makes Verizon the “first U.S. operator” to allow Skype apps.

Update: an AT&T rep has reached out to Geekosystem with the following clarification disputing the “first” from the Reuters article: “This development is really nothing new. AT&T doesn’t prohibit or block customers from downloading any VoIP application from the Internet, nor do we prohibit or block VoIP calls on our 2G, 3G, or Wi-Fi networks. Last fall, we advised Apple that we had no objection to its approval of a VoIP app on the iPhone.”

BARCELONA, SPAIN; BASKING RIDGE, NJ, UNITED STATES; AND LUXEMBOURG, LUXEMBOURG — At the 2010 Mobile World Congress in Barcelona, Verizon Wireless and Skype today announced a strategic relationship that will bring Skype to Verizon Wireless smartphones in March. The new Skype mobile™ product enhances Verizon Wireless’ smartphones for users who have data plans by offering a new way to call around the globe, while also giving hundreds of millions of Skype users around the world the opportunity to communicate with friends, family and business colleagues in the United States using Verizon Wireless.

make and receive unlimited Skype-to-Skype voice calls to any Skype user around the globe on America’s most reliable wireless network;
call international phone numbers at competitive Skype Out calling rates;
send and receive instant messages to other Skype users; and
remain always connected with the ability to see friends’ online presence.
Initially, Skype mobile will be available on millions of best-selling Verizon Wireless 3G smartphones with data plans, including the BlackBerry® Storm™ 9530, Storm2™ 9550, Curve™ 8330, Curve™ 8530, 8830 World Edition and Tour™ 9630 smartphones, as well as DROID by Motorola, DROID ERIS™ by HTC and Motorola DEVOUR™.

John Stratton, executive vice president and chief marketing officer for Verizon Wireless, said, “Skype mobile on Verizon Wireless changes the game. For Verizon Wireless’ more than 90 million customers, Skype mobile adds great value because we’re effectively giving customers with smartphones and data plans the option to extend their unlimited calling community to hundreds of millions of Skype users around the globe. And you’re not limited to using a single type of phone; we’ll have nine smartphones ready right at launch in March.”

Josh Silverman, chief executive officer of Skype, noted, “People want to take their Skype conversations with them wherever they go, whether it’s on a PC, TV or increasingly mobile phones. Verizon Wireless will give U.S. consumers the best Skype experience on mobile phones and will truly change the way people call their friends and family internationally.”

Customers interested in learning more about Skype mobile for Verizon Wireless smartphones can visit www.verizonwireless.com/skypemobile. Additional information about the service will be available next month.

About Skype
Skype is software that enables the world’s conversations. Millions of individuals and businesses use Skype to make free video and voice calls, send instant messages and share files with other Skype users. Everyday, people everywhere also use Skype to make low-cost calls to landlines and mobiles. Download Skype to your computer or mobile phone at skype.com.

Access to a broadband Internet connection is required. Skype is not a replacement for traditional telephone services and cannot be used for emergency calling.

Skype, associated trademarks and logos and the “S” symbol are trademarks of Skype Limited.