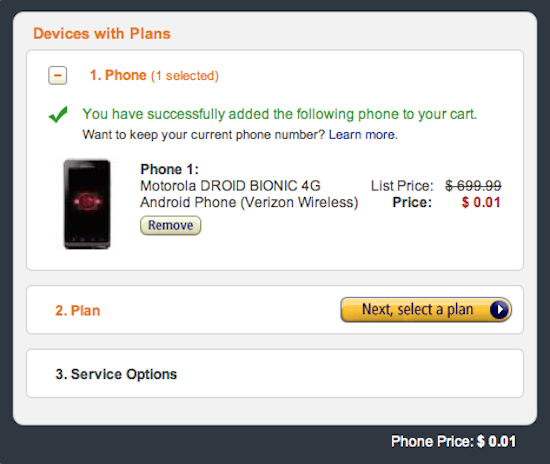 In an obvious attempt to battle the iPhone 4S that arrives tomorrow for those who pre-ordered it, Amazon Wireless is offering a pretty amazing deal for current and new Verizon customers. They are selling every Verizon phone for one cent. Yes, the iPhone is on Verizon, but Amazon Wireless doesn’t carry it, so it seems they figured this sale is the least they can do to combat the release of the 4S. This sale isn’t limited to last-gen flip phones or the cheapest smart phones available; as one can see from the above screenshot, even the LTE-capable Droid Bionic is marked down a cool $699.98. The Bionic isn’t the only LTE-capable phone being offered, as the HTC Thunderbolt and Droid Charge are thrown into the mix. On top of the low, low price of one penny, Amazon Wireless is providing free two-day shipping as well.

However, one can’t simply buy up every single phone being offered for a grand total of barely any money in order to throw them all in a drawer and create a fancy phone drawer, as the offer is only available for new lines. The offer is available from now until Monday, October 17.

Though the price of one penny is pretty desirable, and the strikethrough of a very large number with a dollar sign in front of it is aesthetically pleasing, remember, when purchasing a new, fancy smart phone, they almost always require an expensive data plan to be useful, or even in order to be purchased. So, while it is nice saving that significant sum of cash that would otherwise be paid upfront for the actual hardware, the real wallet-killer comes in the monthly usage payments after that. Still, though, check this out: . If that doesn’t at least invoke some kind of primal curiosity, I don’t know what would.