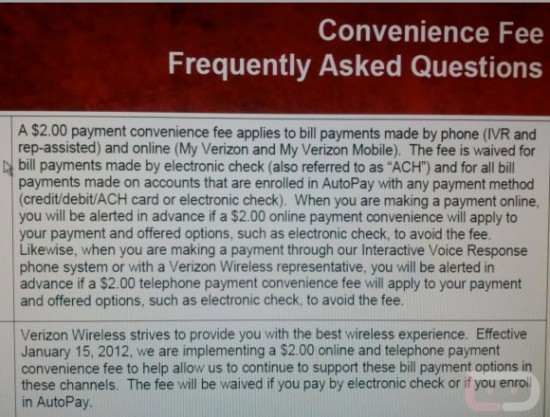 A recently leaked memo indicates that Verizon really wants its customers to use autopay or electronic checks. So much so that it’s going to start charging a $2 convenience fee to all customers who utilize the pay by phone or online payment option. The big idea, from Verizon’s perspective, is to push their customers into modes of payments where Verizon won’t have to foot a credit card fee. Of course, with a $2 fee rolling out, it might actually turn consistent, forgetful fee-payers into a better cash cow, but either way, the fee will make the situation a win-win for Verizon. That is, if they don’t mind getting their customers a little bit angry.

Egregious though the fee might seem, Verizon isn’t the first one to roll out this kind of policy. Sprint has been doing the same thing to its customers for almost 2 years now, and the Sprint fee is 5 dollars. But even if there is a precedent for this fee, there’s also a precedent for a better way. AT&T, for example, offered their customers a $25 gift card to switch over to autopay, something that was just a little more well received. Because of the leaked memo, Verizon has been catching flak even before the actual announcement, so there’s a chance they might go back on their plan. More likely, however, they’ll just go through with it. Having your customers on autopay is really important to service providers, so they probably aren’t going to just give up that fight.