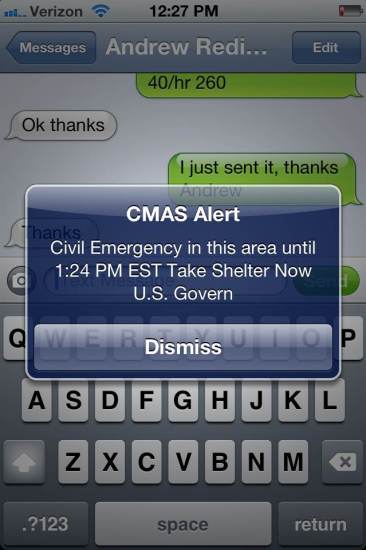 Yesterday, Verizon Wireless users in New Jersey’s Monmouth, Ocean, and Middlesex counties got a terrifying text message that the coming global superpocalypse was not only coming, but had arrived. The message, completely devoid of context, urged recipents to “Take Shelter Now” and purported to be a direct order from the “U.S. Govern[ment].” Of course, the text left a lot of questions unanswered, like “what’s going on?” and “why is there such a specific end time?” and people naturally started freaking out. Fortunately, the police were able to send out a message explaining that there was not, in fact, a civil emergency.

Of course, the real question is: What actually happened? A spokesman for Verizon said that the message was actually a test, but one that wasn’t clearly identified as such. Seriously. There isn’t a single word in there that even vaguely suggests “test” and a whole bunch that strongly suggest “oh man, we’re all gonna die.” The police are taking a different tune and alledge that the message was actually sent maliciously. Other than the two opposing statements, there’s not much to go on.

I guess now we know that the Commercial Mobile Alert System (CMAS), which involves several mobile carriers, the FCC, and FEMA is working. On the other hand, we also know that Verizon has the ability to send out convincing alerts of its own accord, without confirmation of an actual emergency. If you get one of these in the future, you might want to look around and do a little bit of research before you start freaking out. But not too much in case there’s a good reason. Hopefully you’ll just hear about it on Twitter first.