Verizon Announces "Turbo" Button for Better Connections at a Price 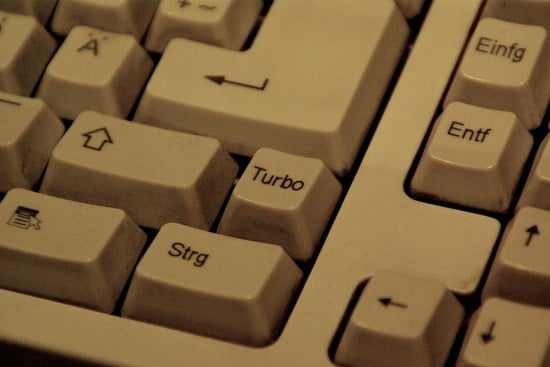 In an interesting move, Verizon has announced plans to release a turbo button API to app developers. Once in place, it would allow users to press a button on their screen that allegedly provides more bandwidth to help take the edge off those data-hungry apps, or pick up the slack when data networks are congested. Unfortunately, it will come at a cost in the form of microtransactions handled by Verizon.

The turbo button was shown off at a recent event at the Application Innovation Center, which Verizon operates in San Francisco. According to PC Mag:

Probably the most noteworthy was the network optimization technology, which took a high-quality video stream and simulated it running over a congested network. When a Verizon engineer pushed a “turbo button,” the video’s choppy frame rate and apparent quality improved.

I’d just like to note that the last time I saw a piece of consumer electronics with a “turbo” button, it was my grandmother’s ancient Commodore computer. All it did was make Frogger harder.

As of right now there is no word on how much these turbo charges would cost, or how much of a bandwidth increase users could expect to see and for how long. Verizon says that it’s working to have the turbo API available to developers in late 2012, and the micropayment system that fuels it by the end of the same year.

To its credit, Verizon has worked hard to take a more dynamic approach to network congestion. For instance, their throttling plan followed suit with AT&T by targeting the heaviest bandwidth hogs. However, Verizon went a step further by only restricting users when they moved into congested areas and halting that restriction when they move out of those areas.

That said, it’s sure to be frustrating for Verizon users to know that their provider has extra bandwidth but is only letting it go for a price. On the other hand, giving users some kind of agency might alleviate that awful feeling of not having a data connection and knowing that there is nothing you can do about it.